Manuela Schär and Shelly Woods looked composed and happy ahead of the 2020 Virgin Money London Marathon. All eyes were on the two female elite wheelchair athletes before they go head to head on Sunday.

Manuela Schär, the Swiss winner in the wheelchair category of the Berlin, Chicago, New York, Tokyo, Boston and London Marathons, is hotly tipped to win this Sunday’s race. While Olympic medallist Shelly Woods from Lancashire is flying the British flag after her wins at the London Marathon in 2007 and 2012.

Both athletes were pragmatic about the changes to this year’s event. “Everything is a bit different these days,” she explained of the hotel bubble the athletes were in. “You feel safe here. You don’t get to socialise as much but it’s probably the safest place on earth right now.” Shelly agreed, and added: “It’s crazy times for everybody. Lockdown was quite challenging, especially as an athlete trying to train for an event like this. All our training venues got shut, you have to adapt. I had to build my home gym and find out ways to get out on the road. It’s been okay and I’m really excited.”

Shelly’s biggest challenge it transpired was much the same as most of us – her son being just three years’ old. “The most challenging thing was being at home with the little ‘un and working from home. It’s been good fun and though it’s been tough it’s been fun. Personally I don’t think you’ll ever get this tie again at home. We tried to make the most of it.”

Both athletes had to adapt their training over lockdown, with Manuela mostly working out at her home gym. She explained that before she broke the world record at the Berlin marathon, she’d only had two track meets, so she was feeling optimistic about Sunday.

Shelly had to train from home too: “You just had to adapt and improvise. I have my rollers at home. Me and my husband and bought some adjustable dumbbells before we got locked down, so we were able to carry on doing the strength stuff at home. The hardest thing was having all the nurseries shut, so it was juggling that and getting my training done.” 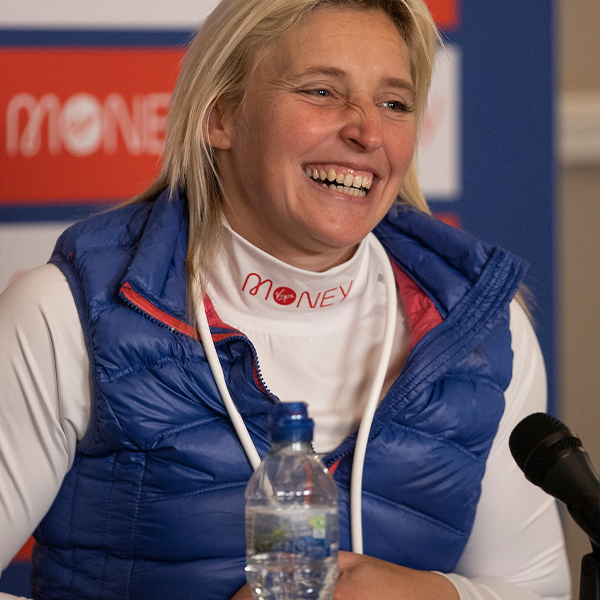 One big change the athletes face is the course, set over 19 laps. How did they think that would affect the race? Manuela said: “I don’t know yet, I’ve never done a course with so many laps. I’ll definitely miss the long stretches where you can just push, push, push. But I’m so grateful that I’m here, I’m just excited.” Shelly was equally noncommittal: “I simply don’t know, I’ve never raced on a course like this before. I’m just really happy to be here, this is the only opportunity we’ve had to race on the road this year and it’s just great that London Marathon have been able to make it happen. I wasn’t sure anything was going to happen this year, so when I hear it was going to be a different course, it didn’t matter to me. We just follow the blue lines and it’ll be okay!”

The other big difference for the wheelchair athletes is that they get a dedicated race of their own, rather than being mixed in with everyone else. “It’s great, isn’t it?” enthused Shelly. “They’re going to be showing the race live. There was never really a focus on the wheelchair race before, so it’s incredible, and great to be able to say to people that you can watch it live on TV.”

The athletes were asked what they’d like to say to the 45,000 runners of the virtual marathon, and they were equally supportive of the global London Marathon community. Shell said, “I know it’s been a tricky year with Covid, but it’s not stopping people. Just get out there and do it and do your best and enjoy it.” Manuela added: “It’s something to enjoy, we still have the chance to get out and run or push a wheelchair, it gives you a feeling of being a part of a bigger thing, so that’s just great. You should enjoy it. No matter who you are and what you do, it unites everybody and everybody is doing it for their own different reasons; it’s such a great event to be part of.”

We couldn’t agree more! The wheelchair race starts at 1.10pm on Sunday 4th October. We’ll be glued to our screens. Find out how to watch here.