Here's what the winners had to say after an exciting race weekend...

Women’s Running spoke with the winners of the Virgin Money London Marathon this morning. What was marked was that the pre-race press conferences included – mostly – different people. It was Eliud, and Manuela, and Brigid last week. And this week, Brigid was still there, but the other faces were new: which just shows what a different race this had been, and how the course and the weather had affected many of the participants.

First up, we spoke to Nikita Den Boer, from the Netherlands, the surprise winner of the women’s wheelchair race, who was beaming from ear to ear. Nikita came 8th last year at the London Marathon, so while she was ahead of the pack, she was never considered to be one of the top three. In the event, she stormed ahead, shaving a huge 12 minutes off last year’s time in 1:40:07. How did she feel? Was she pleased? “Yes definitely. It was a really good win; I’ve never won before, it was my best race ever.”

She explained that the weather was a concern, as it had been for all the participants. “I don’t train a lot in the rain [but] I hoped to do good, and to try everything I can.” But in some ways, Dutch athletes had a small advantage in terms of looser restrictions due to Covid-19, as she explained: “Since May we were allowed to train at the national sports centre, and we could train with a coach and teammates.”

When did she think that first place was in her sights? “Just the last two laps when Manuela [Shar] had slowed down, so I thought I could win this now, so now I tried to go faster.” She commented also on the atmosphere, saying that while the lack of spectators was apparent, there was an unexpected bonus to the crowd-free race: “I could hear my coach encouraging me towards the end!” And, modestly, she summed up the experience by saying, “there have been a lot of reactions on Twitter and Instagram and Facebook and everyone is happy and crazy about it because no one thought I could do it, and neither could I!” 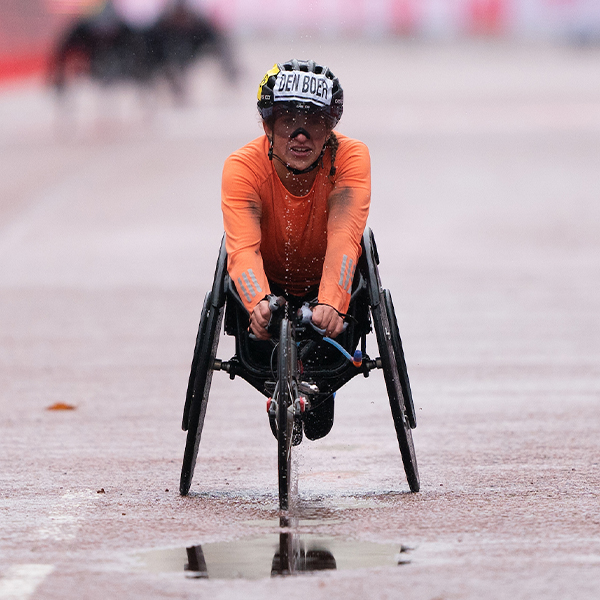 We then had the chance to speak to Brigid Kosgei, the favourite to win this year’s London Marathon, after her record-breaking marathon in Chicago last year, and her first place at last year’s London Marathon. She ran this year’s marathon in 2:18:58 – just 38 seconds slower than last year, despite the course differences and the weather, and yet her disappointment was palpable. After achieving 2:14:04 in Chicago, her ambition was clearly to achieve a similar time. She’s famously unsmiling, and at the press conference, remained so, despite her win. But her words belied this: “I was happy,” she said of her feelings after the race. “I was really happy I was position one again. I was happy because I finished good. The weather was difficult but I tried my best, so I’m happy with my race and I’m happy to be a winner.”

It was hard to prepare because of Covid-19, she said, but she also suggested that her times would reduce next year given the opportunity to prepare well and with the hope that the weather wouldn’t be quite so punishing. “I did my best. It’s not like last time I ran in London. I wish the weather was like today [grey skies and no rain], I could run better than yesterday. Yesterday, we just tried – it became hard because of the wind and the coldness and the rain. It was hard.”

We hope so too. Such incredible efforts from such phenomenal athletes, pushing themselves hard despite the elements, the strange course, and the lack of spectators. Achieving greatness despite their training being upended due to Covid-19. We are in awe of them, as we are of all of you who battled the weather yesterday to run your own virtual marathons. We did it!