1. Eilish McColgan’s win is two seconds off a record

Just weeks after smashing the British 5K record, Eilish McColgan put in a barnstormer of a performance at the London Vitality 10,000 on Monday 2nd May, achieving a new Scottish record (by beating her mum!) in so doing.

Eilish’s dramatic finish at the Vitality 10,000 was also just 2 seconds away from breaking Paula Radcliffe’s 19-year-old European and British record of 30.21, as she won the women’s race in 30.23.

Her mum – running royalty Liz McColgan – went on to say on Instagram: “So pleased [to] have been able to make the trip over to see Eilish smash my Scottish record and her PB and only 2 [seconds] off the British record bonus on gaining a new course record!” She went on to say: “If the course had less turns it was there.”

Eilish, over on her account, said: “Big PB and Scottish Record of 30.23 on the roads this morning! JUST missed the British (and European Record) by a few seconds (TWO..!!) but I’m really proud of my race. Was even more special to take my mum’s Scottish Record and have her with us in London this weekend.”

We don’t doubt for a second that Eilish could have broken that record with a fair wind, and we can’t wait to see what she has up her sleeve next. We very much hope there’s a London Marathon up there somewhere… (watch this space!) Listen to Eilish McColgan on the Women’s Running podcast.

In the Celebrate You wave, which was the last wave of the day, Bryony Gordon set off to achieve her final 10K – as the finale of her 10 days in 10Ks challenge. Using the challenge to inspire people to be more active, she completed the Vitality 10,000 cheerfully in her pants again, alongside running buddies Shareefa, Annie Price, and Carrie Hope Fletcher. We caught up with her around 1K in, at which point she said she was “bloody knackered” and assured us that Tuesday was definitely going to be a rest day. Listen to Bryony Gordon on the Women’s Running podcast.

Editor Esther also ran the course (in a slightly slower time!) and agreed with Liz on the turns. “While the course was beautifully flat, there were a number of turns as Liz has remarked – which was fine for the plodders amongst us, but I could see might have hampered the elites perhaps. It was a beautiful, brilliant day – lots of crowds cheering us on, bands and cheer squads out in force, loads of support from the volunteers, and a beautiful medal that my daughter has immediately stolen. Would do it again in a heartbeat! Ooh, and I got a PB too….” 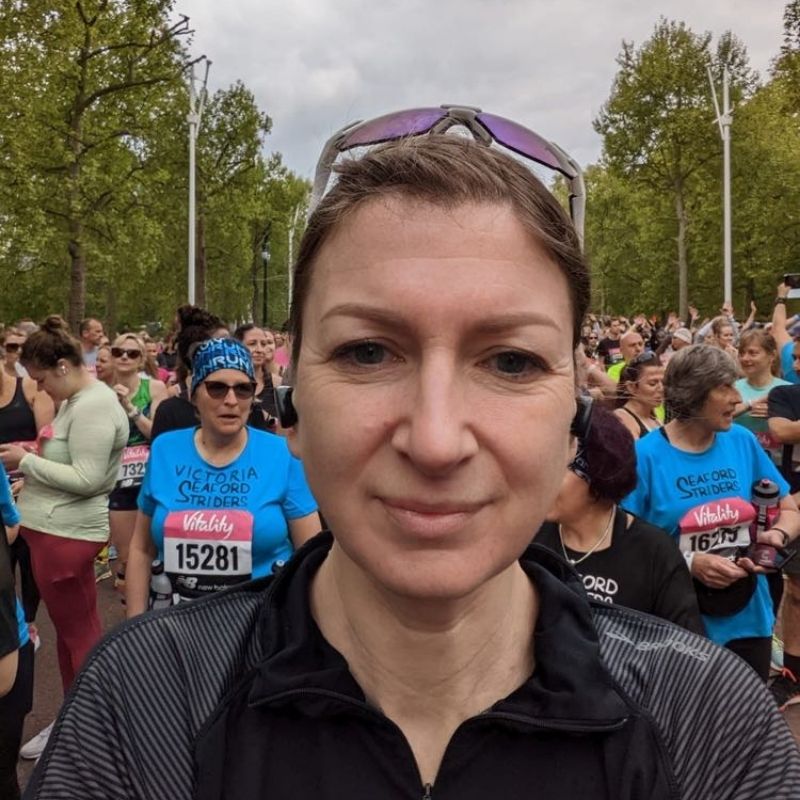