Why it's important to listen to your body - Women's Running

Why it’s important to listen to your body

Anna McNuff’s body has travelled the globe, scaled peaks and felt lows. And now pregnancy is a whole new world to be discovered

“I’m up the duff. Preg-a-roo. There’s a McBun in my oven. Which means that, aside from endless consumption of pickled onions and family size blocks of cheddar, my relationship with my body has taken a whole new turn. A turn that’s led me to re ect on how well I’ve listened to it over the past decade of running.

“I always thought I’d be one of those women who cruised through pregnancy. Surely the process of growing a mini-me wouldn’t affect my weekly runs, especially not when that mini-me is the size of a sesame seed or a blueberry. How much could that possibly matter? News flash – a lot. For the first three months, my runs were dreadful. My legs were leaden, I was wheezing like a geriatric smoker up the smallest incline and I couldn’t let my mind roam freely. ‘So this is what it must be like to not enjoy running’ I thought. I felt like I had never run a step in my life.

“It’s a strange thing, to have spent 35 years getting to know your body – listening to its whimpers, its quiet requests and downright refusals – only to have it pull a whole new set of rules out of the life-bag.  the cheek of my bodacious bod! How ruddy dare it?! But… wait… how many times had I done the very same thing to it – changed the rules of the game and expected it to keep up? I had lost count.

“I confess, I haven’t always treated my body with the greatest respect. Examples of this include; running close to 2,000 miles through New Zealand with a 14kg backpack (my lower back took years to forgive me), completing a 60-mile trail ultra on zero training (I vomited up my malt loaf) and believing I could ‘make do’ with four hours of sleep a night while living the London life through my late 20s (I was the shell of a woman).

“In the past, and in other sports beyond running, like rowing, whenever I was tired or underperformed, I would chastise my body for being ‘weak’. I would insist that the solution to getting it to ‘buck up its ideas’ was to train harder. 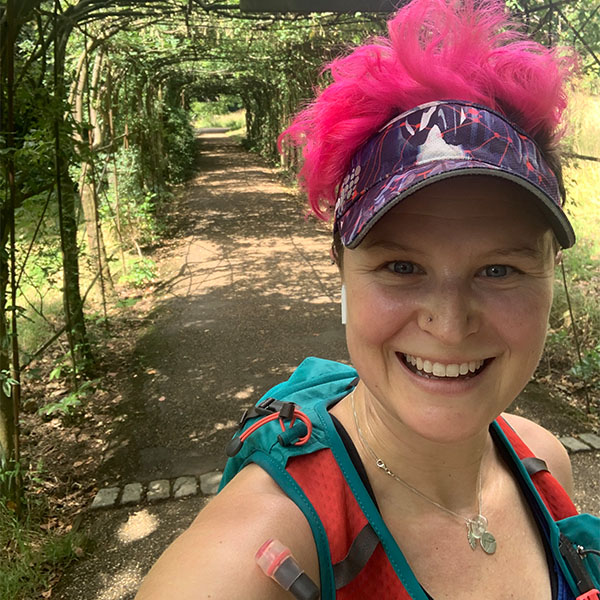 “Over those years, I realised that I was abusing my body. Nothing it did was quite good enough. I was treating it like a disposable paper plate, rather than the priceless Fabergé egg that it is (yours may be a  fine-cut diamond or a sought-after Monet instead).

“More importantly, I realised that if I still wanted to be using that body well into my 80s, 90s – heck, I hope to run a marathon when I’m 100 – I had better start looking after it. And that meant I had some grovelling to do.

“So, before I began my most recent running adventure, Barefoot Britain, I sat down and I wrote my body a letter. I apologised for all of the things that I had done to it over the years. For all of the times I had ignored it, berated it or wished to change it. I thanked it – for putting up with me, for not giving up on me, for coming to my rescue when I needed it most. It was a cathartic and emotional process and I can highly recommend it. It filled me with a sense of gratitude for something I had taken for granted and, best of all, it made me better friends with my body, and with myself.

“Despite the first three months of this pregnancy feeling like swimming through treacle, suddenly, as if by magic, I felt better. The fourth and fifth months have been far easier. I could run 5K without stopping; I could go for miles and still have the energy to talk to the horse in the paddock on the way (horses love a chat). I even managed a two-hour jaunt the other day (promising I’d walk if I needed to). I was so chuffed by the end of it that I ate the largest fishfinger sandwich known to mankind in celebration. All hail the fishfinger sarnie!

“Of course, this isn’t a struggle that’s limited to pregnancy. I’m sure most of you reading this won’t be growing a human right now (or else we’re in for a serious lockdown baby boom). The frequent disconnect between how your body feels and how you’d like it to feel during, before and after a run is a dance that has gone on since the dawn of time – although perhaps we thought about it less then, when our purpose was to chase down an antelope for tea, rather than complete a 10K or half marathon.

“I have learned that the only expectation I can hold through these months, is that every day will be different. Running while pregnant is much like being at altitude in that respect. You must wake up every day and see where you’re at. So, whether you’re running through grief, stress at work, coming back from injury, juggling a family or just having a rough run-patch for apparently no reason whatsoever, know that your body will always have your best interests at heart. Sometimes a five-minute check in with it can do the world of good. Maybe you could treat it like an old friend and take it for a cup of coffee and a slice of pie.

“Whatever you do, listen. Be patient, and be kind. Your body is wiser than you think. Sometimes, it even knows better.”

Anna’s latest book about her adventures, Llama Drama: A two-woman, 5,500-mile cycling adventure through South America, is out now, available in paperback and on Kindle