What’s racing like in a post-Covid world? - Women's Running

We speak to Women’s Running reader Alice McGushin, on running (and winning) one of the first races post-Covid

Alice McGushin ran the Stour Valley Path 100 (SVP100) on 15th August, a 100K (62 mile) long footpath in England, which starts in Newmarket, Suffolk, and ends in Cattawade, a village near Manningtree. She won it, taking nine minutes off the previous women’s course record. Throughout lockdown, she had all her fingers crossed would still go ahead despite all the other cancellations and postponements. And it did! Here she speaks to us about her experiences on the day, and her training leading up to it.

How did you prepare for the SVP100?

“I began training from mid-March, after lockdown was announced and all my spring races were cancelled. Given the lockdown restrictions, my first couple of months of training were completely alone, with the starting point always at my flat in Battersea. I made good use of Strava Routes, planning interesting long runs through all the different parks and woods in South West London! My long runs at this stage were up to 47K at this point, so I needed to keep them interesting. As lockdown measures started to lift, training got slightly more interesting and I had company for some of my speed sessions in Battersea Park and some of my long runs. I also explored a little further afield, running to Guilford along the North Downs Way, running to Haywards Heath from home along the London to Brighton route (then getting the train the remainder of the way to Brighton), and along the South West Coast Path in Cornwall. It was nice to do a bit of training on trails once I could leave London!”

“In many ways the atmosphere was like any other great event but in others it was different. What remained the same was the incredible encouragement from event volunteers, bystanders enjoying their Saturday along the route and the other competitors. The atmosphere all along the run was great! The atmosphere at the start of the race was very different to any other race I have run. Due to social distancing measures, we each started off individually within a 30 minute window based on our expected running time. In many ways it was the most casual race start I have ever run! None of the usual starting line nerves, anticipation, waiting for the gun to go off or starting out way too fast because I got caught up in everyone else’s excitement. I simply walked up the street from the bag drop area, had my temperature checked and then started running when I was ready.”

How did the race go for you?

“I really enjoyed it. I ended up spending chunks of the race running with different runners, which is always nice, talking to them about where they are from and their hopes for the race. It’s the furthest I have ever run though, and it started feeling long at about the nine-hour mark. It was also at this point that I realised that my GPS wasn’t working properly (all the other ultra runners would later tell me that you should never use UltraTrac for running – rookie mistake) and I actually had a lot further to go than I thought I did! This made the last few miles all the more tough, especially when I lost the course for a few minutes. But as I approached the finish line, I was feeling ecstatic.”

[Alice won the race, taking nine minutes off the previous women’s course record, with a time of 10:37:19.]

What other race successes have you had?

“I started being fairly competitive in races – mostly trail races – about five or six years ago, initially running races of about 20-30K, then marathons and then, starting in 2018, ultra marathons.

“This year I have run:
– the Coastal Trail Series Northumberland marathon – win and third overall
– SVP 100 – win and a new course record 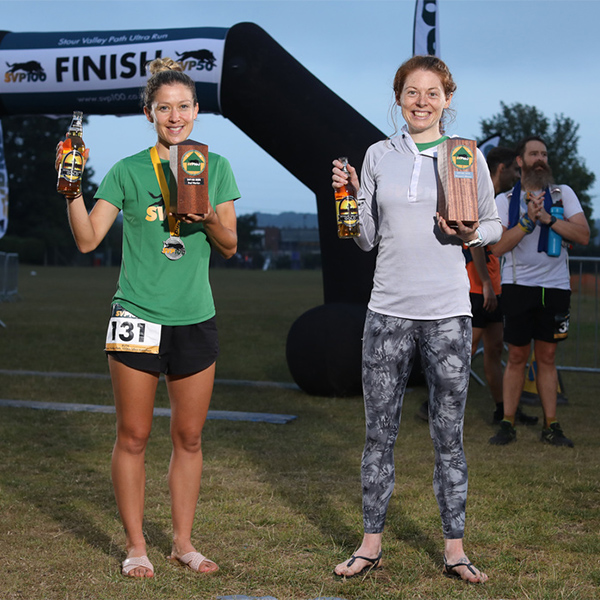 When did you first start getting into running?

“I’ve always run to some extent, although how much I have run has increased incrementally. I first properly got into running while in university. There were some fairly competitive guys a couple of years below me and I started running with them and pushing myself a bit harder. The next step up was when I moved from Tasmania to Western Australia to start working as a junior doctor. There I used trail running as a way to explore the state and my mornings and evenings before and after ward work to start training for marathons. The leap after that occurred after I moved to London. Again, I thought races would provide a good opportunity to explore places in the UK and in Europe. And, with some encouragement, I ran my first ultra in 2018 and then joined a London running club, Clapham Chasers. Now I’ve run seven ultras and a whole lot of marathons and other races.”

And what’s your next challenge?

“I was initially signed up for London Marathon. There were a number of very fast ladies in my club signed up and we were going to try and go for the women’s championship team again. Then London was cancelled, so a few of us signed up to the Wrexham Elite Marathon, which is on the same date London was going to take place (4th of October). It’s only six weeks away, so I don’t have much time to try and get some speed back into my legs! But I am hoping for around 2:50. We’ll see!”

Have you run any races since lockdown has been eased? Let us know how they went, and what you think of the new safety measures in place by emailing us at [email protected]