"We can surprise ourselves...if we are just willing to give it a shot" | Interview with Courtney Dauwalter - Women's Running

Looking for more running inspiration? Check out our other interviews!

Courtney Dauwalter is a bit of a trail running sensation and with good reason – earlier this year, she smashed the women’s record around the iconic Ultra Trail du Mont Blanc (UTMB) race in Chamonix, France.

The brutal 106 mile race takes most runners between 37 – 47 hours – if they even finish at all. Courtney put in an incredible performance, winning the women’s race in just over 22 and a half hours.

We caught up with her to find out how she felt when she crossed the finish line – and how she keeps motivated to train.

“Every race is a new adventure and a new memory,” says Courtney when reflecting on the UTMB. “This race is a special memory because after this last year of not being able to travel, it felt so wonderful to be back in the ultra running community pinning on a bib to test ourselves at 100 miles. I feel very lucky that we were able to all gather for the race this year.”

For many runners, the finish line of the UTMB is almost as revered as the race itself. Thousands of spectators pack the cobbled high street, cheering and whooping as each runner makes their way to finish after hours and often days of running.

For Courtney, it was no different: she tells us about one of her best moments of the race: “Getting back to Chamonix after many hours of tough mountain terrain is so cool. It feels like you can finally believe that you actually made it! I tried to soak up all the sights and sounds and energy of the amazing crowds cheering. I was so happy to then cross that finish line and instantly see my husband, who was a huge part of the entire race.”

So, what does it take to win an event like the UTMB and still come into the finish with a smile on your face? 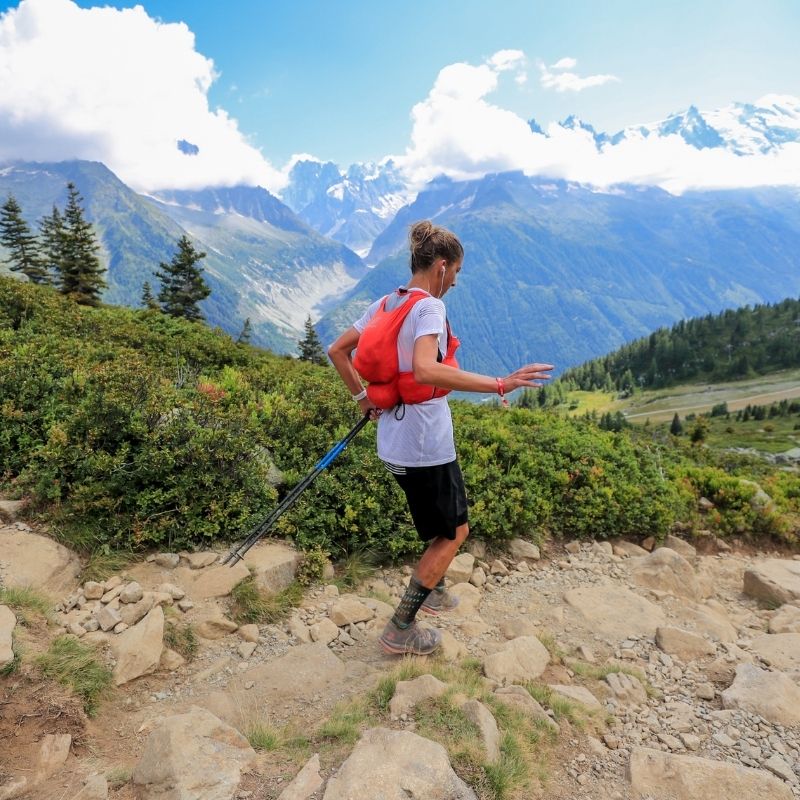 “I average 110 miles of running per week, mostly on the mountain trails near my home in Colorado” says Courtney. “The length of each run varies by a lot. Sometimes I’ll be out for six hours and sometimes it’s a 45 minute run. I also do a daily 30 minute strength routine that focuses on my hips, core, and glutes.” Ah, that pesky strength work that we all know we need to do – Courtney has us seriously impressed.

But even a trail running legend like Courtney doesn’t always feel motivated to train. “If I am ever feeling unmotivated to get out for a run, I’ll usually still put my shoes on and get out the door. This is sometimes the hardest part! But I find that if I do this, and at least give myself a chance to go run, I’ll often feel better within a few blocks of leaving my house. Once I’m out running, if I still feel crummy and unmotivated, I’ll listen to my body and turn my run into a walk around the neighbourhood instead.”

That’s the lovely thing about Courtney – she is just like any other runner. The idea of running 100 miles might seem totally unattainable to us, and Courtney felt the same when she first started!

“When I lined up for my first marathon, I didn’t think it was possible for my legs to carry me 26.2 miles. We can surprise ourselves, though, if we are just willing to give it a shot. Be patient and consistent with your training, believe in yourself, and go for it!”

Want to know more about the UTMB? Read our race review.