We asked Kathrine Switzer for her marathon advice - Women's Running

We asked Kathrine Switzer for her marathon advice

The legendary Kathrine Switzer shares her marathon story with us and offers some great advice ahead of the virtual London Marathon on Sunday...

“Your first marathon is like having sex for the first time: you’ll never forget it. I told that to a group of women once and one of them screamed, ‘Oh my God, I hope it’s not THAT bad!’

“Seriously, the more prepared and knowledgeable you are, the more you can enjoy the experience, notice your surroundings, make friends on the way, soak in your own amazing greatness.

“My first marathon was actually a practice run of the full distance, as I had to show my coach I could do it. This was in early 1967 and he didn’t believe any woman anywhere could possibly run a marathon, despite the fact several had. We argued and finally he said if I showed him in practice I could cover the distance, he’d take me to the Boston Marathon, which I was really keen on doing.

“We ran the practice run together and as we came into our ‘finish line’ 26.2 miles/42.2K later he was full of praise and wonder. I felt much better than I thought I would, so I suggested that ‘just to be sure’ we run another 5 miles/8K. He was hesitant but we trudged on and about a mile from our finish, he began to go all rubber legged and disoriented. I pulled him along saying, “C’mon, only one more mile, c’mon we can do it”. When we finished what was now a 31/50K mile run, I flung my arms around him and said, “We’re going to Boston!” and my coach promptly fainted. He woke up saying, “Women have hidden potential in endurance and stamina!”

“My coach insisted I enter Boston officially. He said people should not just jump into races [as some women did]; that the officials hated that. We checked the rule book and there was nothing about gender. So I paid my $2 entry fee and signed the entry form as I always sign my name: K.V. Switzer. I began signing my name that way when I was 12 as my dad had miss-spelled my name on my birth certicate, and consequently Kathrine was always changed to Katherine and it annoyed me. I probably wouldn’t have been given a bib if officials saw Kathrine on the form. 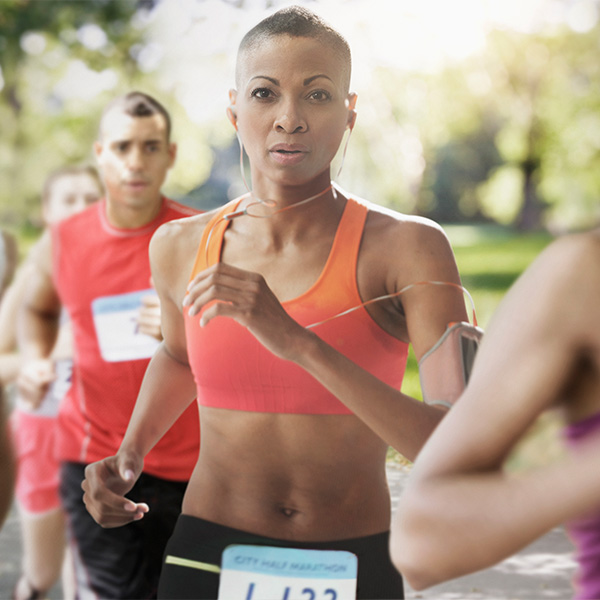 “Now everyone knows the story about how at about 1.5 miles into the race, the race director attacked me because I was a GIRL in HIS race, and he tried to rip off my bib numbers. My boyfriend (a big guy) knocked the official away and, quite terrified, we all ran on with the press truck in hot pursuit. It’s funny in the re-telling, but it was awful – awful – at the time and, in fact, for several years after. I was so angry and humiliated that I said to my coach that, no matter what, I was going to finish, even on my hands and knees. I finished in 4 hours 20 minutes. And my life was changed forever.

“So my advice to a first time (anytime) marathoner is this: the marathon is amazing and it will change your life. So be prepared for it. If you can, run more than 20 miles in training. The last 10K of a marathon feels like the first 20 miles.

“The long run every week is critical because it teaches the body how to convert from burning glycogen (sugar, energy) into burning fat. Women have an advantage with fat. It’s a fuel source, but only training long helps you to utilise it when you need it most, ie, running a marathon.

“To stay injury-free, do your core work. And keep your shoes in good repair. Don’t begrudge the time you put into preparation. Running a marathon is like writing a book. You don’t just go out and do it. Be prepared for any weather conditions and bring all the possible gear you need with you. But also, you will need less than you think. Don’t overdress. If it’s cold, you may only need a hat and gloves. Test all your gear in practice, do a few long runs in all the items. Critical are your bra and socks. Don’t forget sunglasses, credit card, visor, but do not carry water or anything extra. There is plenty of fluid on the course, don’t weigh yourself down. 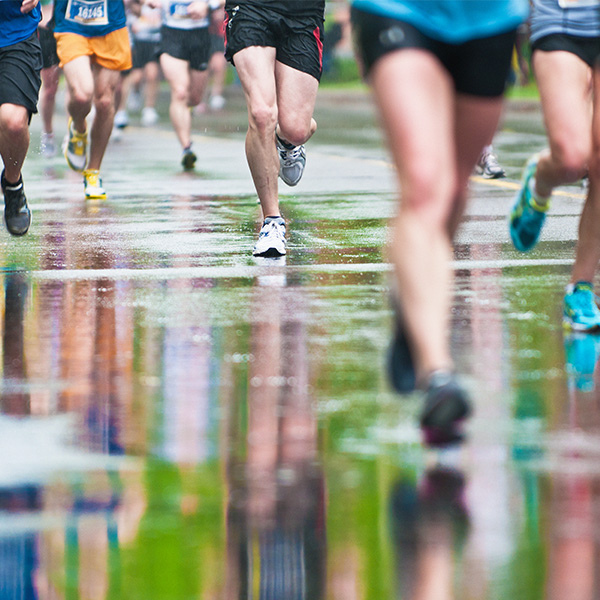 “Put Bodyglide everywhere. Especially between your toes. Yes, you may never get blisters in your training run, but they mysteriously happen in the race itself. Likewise, trim your toenails pretty short, no closer than three days before the race. Reason is, your hands are shaking the night before the race and you don’t want to nip them too short or cut the skin!

“Count the days and figure out if you are going to have your period. If so, wear black shorts or capris. You don’t want to be preoccupied by this. If you don’t use a menstrual cup, you might test it now. But don’t do anything new in the race.

“Add extra carbs – pasta, potatoes, rice – for the three days leading into the race. Eat a good breakfast that has carbs. Check the timing; you want to eat something substantial about three hours before. If you go into the race hungry, you risk crashing with low blood sugar. Sometimes there is a huge wait at the start of the big races. In that case, take a banana with you.

“Try to get good sleep the week before, especially two nights before. The night before the race you invariably won’t sleep well, and it doesn’t matter as long as you have a few nights in reserve already.

“Here is what I didn’t know but learned in my first marathon race: that good preparation made me very confident that I could finish. So I didn’t worry about that. I knew almost no one there had run 31 miles a month before the race!

“I have always done the full distance in training. That way I feel very confident and can worry about other stuff.

“The determination to finish is important. You will have things that conspire to make you want to quit, but if you can overcome them, you will feel the triumph forever. Having said that, you should know if you are getting injured. There is a difference between hurting/tired and hurting/injured. Don’t be a hero for one race; recover and come back. 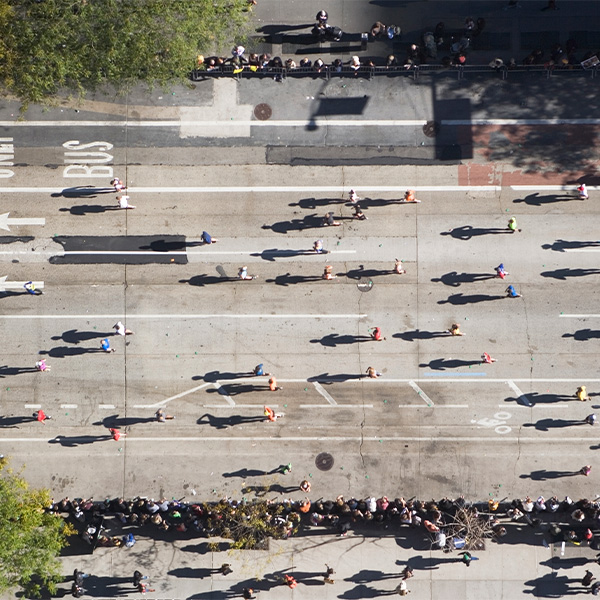 “You are surrounded by thousands of strangers and they are all your best friends. Every man actually running in that first Boston Marathon that I met, encouraged me. When you are feeling low, encourage someone next to you to take your mind off it. Enjoy the sights. It’s an astonishing way to visit a location!

“Make sure you know where you are meeting up with your significant others after the race. But also have a plan B in case you arrive significantly sooner or later than expected. Don’t ruin the day with an argument or misunderstanding.

“Plan a celebration after the race, that evening if possible, to capture the moment. If you just want a shower and to go to bed, do celebrate sometime soon. Wear your medal!

“However I would recommend that you don’t sit in a hot bath for a long time after the run. You’ll feel like having a bath at first, but may emerge feeling sick. Instead I suggest a shower… and a hot soak the next day.

“Expect, three to four days after the run you will probably go into a postpartum funk. It’s totally normal! Rejoice in that extra time you have to recover and do something that makes you feel significant.

“Write down your memories before they fade. Write down your dos and don’ts in your logbook to remind you what worked and what didn’t for the next time.

“The biggest thing I learned from my first marathon is that after that, I knew I could do anything.”