Ultrarunner, coach and journalist Damian Hall has been a part of the Women’s Running team for a long time. Since stepping down from his official duties as Chief Sub Editor a few months ago, he has remained a great friend and an inspiration runner to us all, so it was with great pride that we watched him cross the Pennine Way finish line in record time on Friday, all while clearing the trail of litter.

Damian, who’s also an ambassador for inov-8, completed the iconic ultra route from Yirk Yetholm in Scotland to Edale in Derbyshire in a record time of 61 hours 34 minutes, beating the previous record by over three hours.

The Pennine Way is Britain’s oldest, and arguably toughest, National Trail, with a total ascent that exceeds the height of Mount Everest. It usually takes hikers between 16 and 20 days to complete. Our pal Damian did it in two-and-a-half.

Wiltshire-based dad-of-two Damo battled tough weather conditions and exhaustion, but that didn’t stop him from clearing the trail of litter as he ran. Along the way he and his crew of pacers stuffed any rubbish they spotted into their packs, handing it to support team members at meeting points.

Damian has been a vocal climate change campaigner for several years and is proud that all of his running this year, including his Pennine Way challenge, have been certified as ‘carbon negative’ by Our Carbon, along with his family’s lifestyle for 2020 so far.

Speaking just after he crossed the finish line at 7:34pm on Friday, he said of his adventure: “I feel overwhelmed, really. I remember writing about Mike Hartley’s 1989 record in the Pennine Way guidebook before I got into running and thinking ‘That’s insane, I could never do that!’ 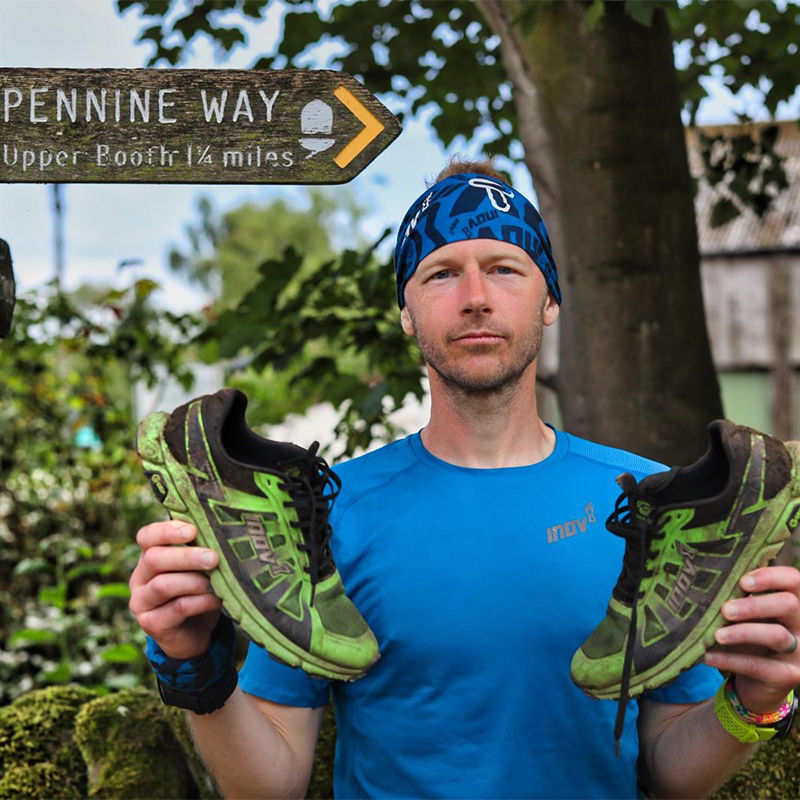 “It was a huge team effort and I couldn’t have made it happen without the support of my road crew, pacers and the people we met along the way. I had the inevitable low spells, but the incredible team got me through them.

“I felt hugely motivated by three things and had FFF written on my arm in permanent marker as a reminder. They stood for Family, Friends, Future – the latter relating to our need to protect the planet.

“There wasn’t a lot of litter on the trails, but we picked up anything we saw. The road support crew did likewise from the places they met me at along the way.”

A huge well done to Damo, who raised over £4,000 for Greenpeace. You can still donate to his JustGiving page here.