Sally Orange: "I hope others will get help much sooner than I did" - Women's Running

Sally Orange: “I hope others will get help much sooner than I did”

Adventurer and endurance runner Sally Orange is no stranger to a tough challenge, with over 50 marathons under her belt and several Guinness World Records. She’s also the only person on the planet to run a marathon on every continent in fancy dress. Her costume choices? You guessed it: pieces of fruit!

Her latest task saw her complete two marathons in the space of a week, this time with the goal of raising awareness of the importance of our mental health. The military veteran Army Cadet Force National ambassador took on 26.2 miles 1000m underground in a mine as well as on a treadmill positioned in a London Eye pod.

Sally’s aim was to raise awareness of the power of sport for the recovery and rehabilitation of wounded, injured and sick service personnel and veterans, and she managed to bag herself two new Guinness World Records in the process.

The underground mine marathon, named ‘Below the Surface’ by Sally and completed on World Mental Health Day, was a way of representing how difficult it is to know what’s going on behind closed doors in a person’s life, with the London Eye marathon, which she ran in aid of the Invictus Games Foundation, also being a good way to portray the highs and lows of the recent pandemic.

“Running 26.2 miles in an isolated bubble seemed the perfect way to symbolise the ‘ups and downs’ that the pandemic has had on people and the associated need to reduce the stigma attached to poor mental health. Sport has always been a key factor for me to maintain my physical and mental fitness,” Sally told Women’s Running. We spoke to her further about these two incredible challenges.

Between the mine run and the London Eye pod, which marathon attempt were you most apprehensive about?

“I was apprehensive about both marathons but for difference reasons.

“The underground marathon involved a team and so I wanted to make sure I didn’t let anyone down. I had been down the mine back in February so was confident I could cope with the conditions and although I knew it would be challenging was excited about the prospect of marking World Mental Health day in a unique way.

“The London Eye marathon had also seemed a great way of highlighting the challenges the pandemic has had in mental health, but being scared of heights posed a huge challenge!” 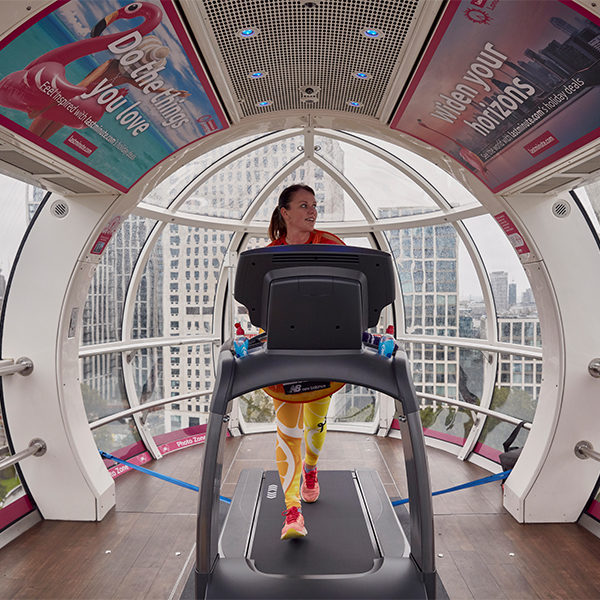 Were there any particular challenges that running 1000m below ground presented?

“One of the main challenges was the temperature as it 35 – 40 degrees, so very hot! We also had to wear safety helmets and torches as it was pitch black. It was incredibly dusty so mixed with sweat we all looked quite a sight when we eventually returned to the surface. It was also surprisingly hilly down there but it serves as a great reminder that there are miners who work in these conditions every single day.”

How did you mentally prepare for the challenges you faced?

“I had been down the mine in advance as a matter of health and safely to ensure I was comfortable with what the conditions would be like. I kept putting to the back of my mind the height of the London Eye and told myself I could focus on the treadmill if it all became to much.

“My real focus for both though was knowing exactly why I was wanting to do these challenges, which wasn’t just for the uniqueness of the marathons, but more to be able to raise awareness of mental health challenges faced by human beings. By talking about my own difficulties with mental health, I hope others will get help much sooner than I did.”

I imagine running a marathon inside a London Eye pod takes some mental nerve!

“It certainly does when you’re scared of heights!!” 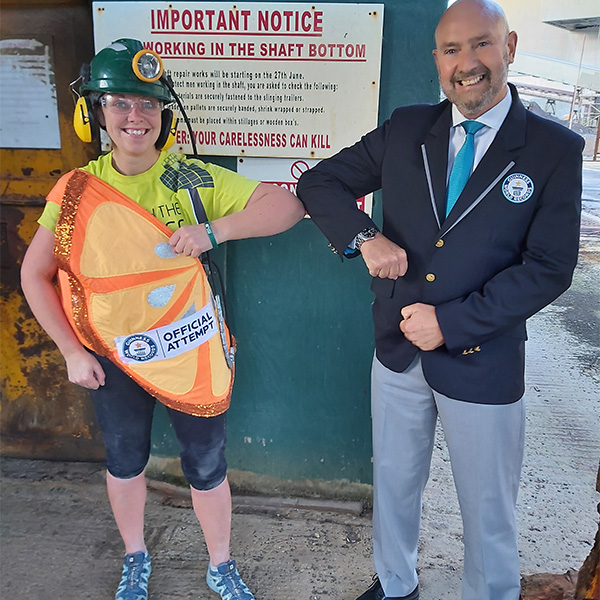 Do you think the link between our mental and physical health is important?

“I know it is absolutely vital. As a physiotherapist I have seen first hand the impact that physical injuries can have on an individual’s mental health and vice versa, so it’s incredibly important to treat both elements hand in hand.”

Do you think we talk about mental health enough in the running industry?

“As a physiotherapist, I know that people have no problem mentioning a physical injury to others and what they have been told to do to manage it, but they aren’t always advised on how to manage any deterioration in their mental health that their physical injury may lead to.

“Unfortunately people still don’t openly recognise and admit they have a mental challenge and the impact that it may be having on them physically.

“I think it is improving but that there is still some way to go.”