Running and postnatal depression: “It's been a massive part of getting me back to who I am” - Women's Running

Running and postnatal depression: “It’s been a massive part of getting me back to who I am”

This week is Maternal Mental Health week. Last year, we spoke to Sarah Pritchard, who suffered from crippling postnatal depression after the birth of her second child. With the encouragement of her friend Hannah Cameron McKenna and the support of psychiatrists, she was persuaded to put her trainers on again, and in so doing aided her journey back to full health. Sarah and Hannah told us their story… 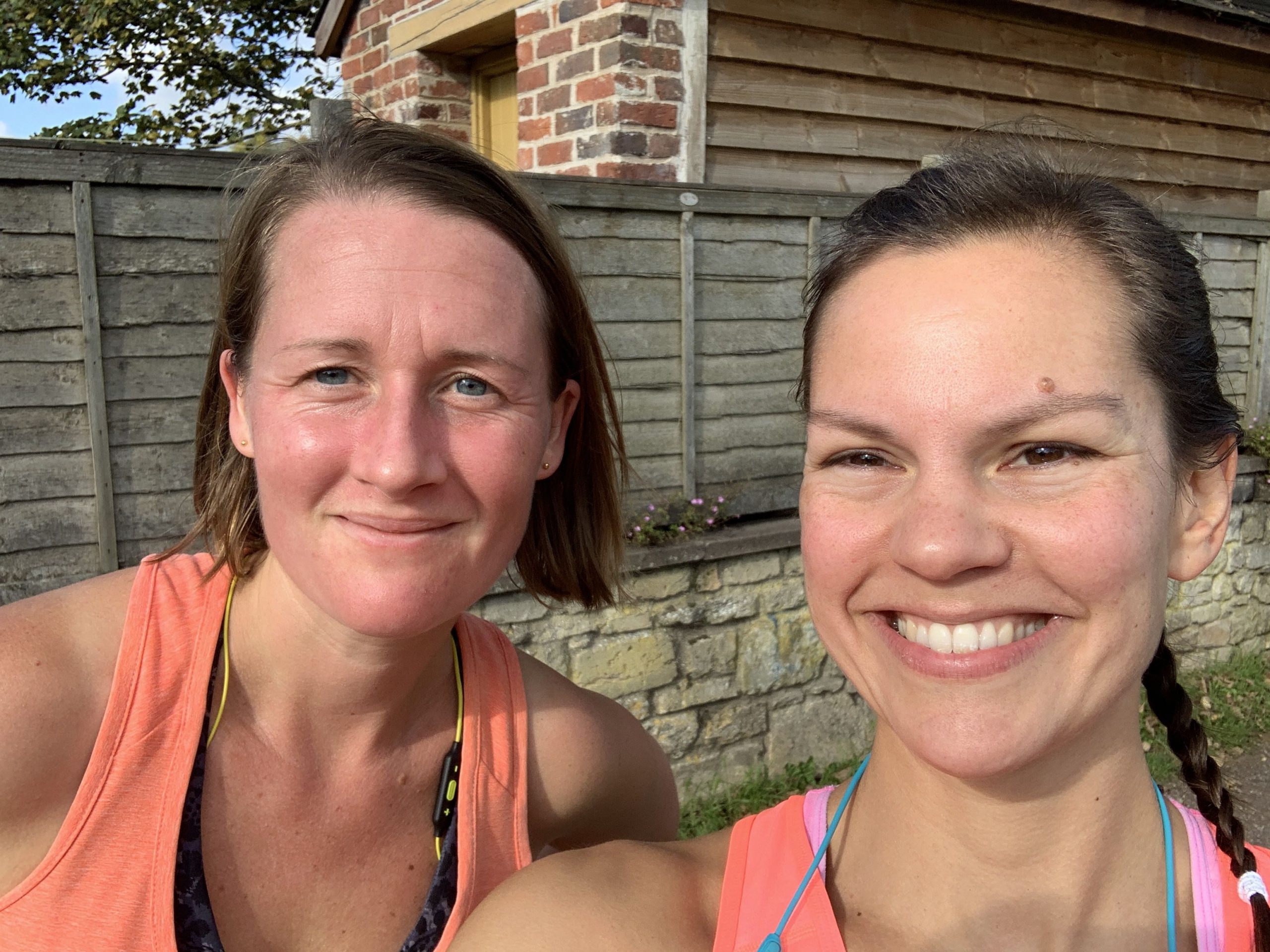 Sarah: “I started running when I was at uni because I couldn’t afford to go to the gym, but it wasn’t until 10 years ago that I did my first race. I had met a group of people who loved running, and I decided to join them and got the bug. We put a couple of teams into the London Triathlon as they do a relay, so I could just do the run part, and the buzz I got was unbelievable. So then it was cemented into my routine. I was running to work, and started thinking about other races I could do. The community thing was amazing – it got me friends, it gave me an ‘in’. I realised it was more than a cheap sport; it was about friendships, community and boosting each other.

“I had my first baby in 2014. I was really poorly afterwards with postnatal depression, but felt sufficiently recovered by six months to start thinking about running again. I got involved with This Mum Runs, as I had noticed them popping up on Facebook. I thought that was the perfect way to get back into it. I met lots of lovely people through it, and one day someone suggested I could be a Run Angel, so I did that but then it tailed off because TMR left Bath. But by then I had a great group of friends who loved running, and we set up a Facebook group called the Sisterhood of the Skort (we all love a skort!).

“We continued to run and be a general supportive community. I did the Bath Half, and the Bristol Half. And then the massive thing last year was when I came to see running as another level of support for mental wellbeing.”

“When my second daughter was born in February 2019, I descended into a scary depressive episode very quickly. This time the impact on my family felt like a nuclear mushroom. This is where Hannah comes in. In those first few weeks when I was working out the best way to manage what was happening, I had this phenomenal response from my friends. Hannah became chief project manager of the response team and organised meal drops, arranged friends to come and sit with me in the evening, and to help pick up my daughter from school. She would come here to check on me, make me a drink and hold the baby.

“But as things went on, I deteriorated to the point at which I couldn’t be supported at home. A place was available in the New Horizons mother and baby unit at Southmead Hospital in Bristol, and I was persuaded that it was a good idea for me to go there.

“I was petrified about going, but I had no choice really. I truly believe if it wasn’t for New Horizons, I wouldn’t have got better as quickly or as completely as I have done, which is why I now want to support them as much as I can.

“At the unit, their approach is holistic, and goes beyond the immediate patient and their baby. After I had been admitted, it wasn’t long before I revealed that I like running. The clinical psychologist said they wanted me to bring my running kit in, so my husband bought it for me. They said, ‘just put your shoes on; have a walk around’. I found those early sessions difficult but she kept saying ‘behaviour causes motivation’. At that point I felt zero motivation, but I started putting on my running kit. Six weeks after I got back, Hannah mentioned going for a run.” 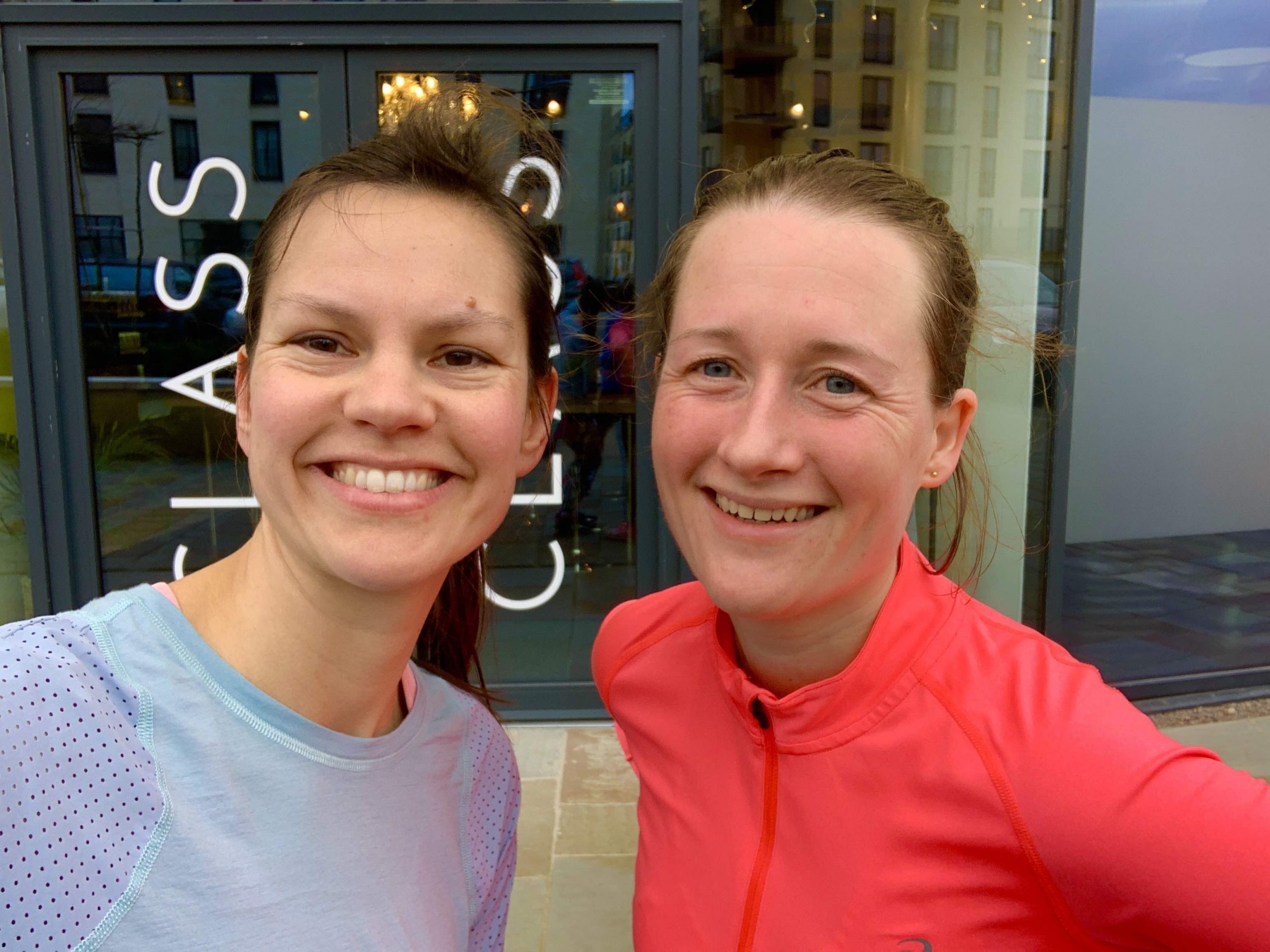 Hannah: “I remember just thinking that she wouldn’t feel disappointed by trying to go for a run, but I wasn’t sure if it would work. Sarah had come to junior parkrun with her oldest child and couldn’t do it. She had to stop. So I didn’t feel confident that suggesting a run would work. But I knew she couldn’t make any decisions for yourself, so I knew that asking her if she wanted to go for a run was pointless. I just said ‘I’m coming over, put your trainers on’.

“We did 3 or 4K. She cried half the way round, but we did it. She was having a lot more proper talking therapies at that stage, and a lot of uncomfortable stuff was coming out, and it was hard for her to be home, but we did it, and we both considered it a success. It was only then that I knew she were going to get better.

“When she was ill she was like a different person. There were still glimpses of actual Sarah, but I just tried to think what would she have wanted to do. I just felt like it wasn’t a huge risk – we weren’t going to go far, and I thought the worst-case scenario was that she would have a panic attack and I’d have to drag her home.

“That first run gave me the confidence to persuade Sarah to do stuff out of her home. So the following week we went to yoga. I’d booked a restorative yoga session for the two of us and another friend of mine who didn’t know Sarah. She’s a runner too, and I’d told her about Sarah’s PND. She gave Sarah a massive hug when we’d finished as she’d had her own mental health struggles, and it reminded me how important the running community is. It was a really enlightening moment of how this community of women was going to get Sarah through the next stage.

“When Sarah was first ill, when it was clear that things were not going to get better, I confided in Hannah Lees, who organised our community running group. She organised sending a plant and a card, and she pushed the message out to all the runners that had run with Sarah. I was suddenly overwhelmed by messages from people saying, ‘can I bring over a lasagne’. They all just bowled in and were amazing. I just couldn’t believe how this big group of really busy women with children and jobs just dropped everything without question and joined the cooking rota. There was no, ‘if you need anything give me a shout’ they were just there. They just showed up.

Sarah: “I got this card when I got home, which was basically a list of all the people I had run with, along with a plant and some hand cream. It was overwhelming because it humbles you. There’s so much more to running.

Sarah: “Hannah had done the Bath Half while I was pregnant, and hadn’t enjoyed it very much. So I said to her I wanted to help her run the Half again, and help her to have more fun this time, and while doing so I wanted to raise more money for the New Horizons unit. And Hannah said she’d do it even though she’d had this awful time.

“The Half is a celebration of recovery. It’s not just the day; it’s all the training. It’s going out when it’s icy, and when your kid has been up since 5am. But it’s also a celebration of friendship and what the running community can do to bring a person back.

“Running didn’t make me better, but it’s been a massive part of getting me back to who I am. Now I feel like a platinum version of what I was before, as I see the value of running and what it is for other people. So by raising money I want to show my running community how much I valued their part in my recovery. It’s not about repaying; there’s no price for supporting someone in the depths, but you feel like you need to acknowledge and to remind people that what they did has not gone unnoticed, and not been without importance. It was a way I could do something practical and enriching. The Bath Half is a massive marker of what we’ve been through.”

Hannah: “And the time of year is so poignant. When I ran it last year, the running saved me from spiralling into my own low point directly from what was happening with Sarah. I couldn’t have ever imagined that Sarah would be where she is now, that we could contemplate running the Bath Half together. I thought she’d recover, but I thought she wouldn’t be the same.

“I felt like running was the thing that made Sarah ‘her’ again. She was tons better when she came out of the unit. But on every run, I could see her returning more than anything else she did.”

Sarah: “It’s in my mental health care plans now. My psychiatrist says that it’s things like running that makes a person better. Things that mean so much to you, that you’re in control of, that you can motivate yourself to do, has as much impact on your psychological wellness than any medication.

“This isn’t just about running, it’s about finding those things that help people bring their hope back. Showing other people that they can get through it, because I’ve done it and I’m no different to anyone else.”

Sarah and Hannah are running the Bath Half on 15th March to raise money for the New Horizons Mother & Baby Unit at Southmead Hospital in Bristol. You can support them here.