Kemi Mafe: "I want more people who look like me to run" | Women's Running

Kemi Mafe: “I want more people who look like me to run”

Running has taught natural sprinter Kemi Mafe a lot about pacing herself – both in races and in life. Here she tells Rachel Ifans how she fell hard for running...

Kemi Mafe lives in London, although with parents and immediate family in Nigeria, she’s often visiting them in Lagos. She fell into running just a few years ago, in 2016, while studying for a PhD in renewable energy. “It was actually by accident,” she explains. “Back then, I was really stressed out by my PhD work and I used to go for really, really long walks. This one day I think I was gone for two hours and I suddenly thought to myself, ‘Hold on a minute, all this time I’ve spent walking I could have run it, done it in half the time and got back to my work’”.

She laughs, remembering, “Literally, that was it. I started running around the block first, and then increasing the distance. I also started looking for run clubs in the area where I lived. I joined Sweatshop, Adidas Runners, Run Dem Crew. I was running all over the place!”

Kemi recalls how her love soon turned to something else. “I became obsessed with running – it was all I was doing and I wasn’t doing my PhD work. In hindsight, I now know I was using it as a way to escape the work and along the way I’ve realised I was su ering from anxiety at that time.”

This realisation has helped Kemi and her family make sense of why she was running all the time. Previously, her family and friends had found it hard to understand what was going on in her life. “My friends would lament the fact that we used to be couch potatoes together, and then all of a sudden I was running everywhere! And my parents were worried it was distracting me from my studies. Even today they still don’t really get it, I don’t think, but they’re getting used to it!”

Looking back to 2016, it’s easy to see what was going on. Kemi was riding the psychological benefits of running, like a wave. “You feel like a weight has been lifted off you when you run,” she says. “You always feel good after a run and you feel free while you’re doing it. I think it’s that feeling you get at the end of it, though, that makes you want to do it more so you can feel that way again.”

She was also enjoying the added benefits of running rather than walking; she lost a bit of weight and felt good about herself and her body, and she enjoyed exploring new places through her running.

In those early days, she didn’t have a plan. “I had no idea what I was doing. I just went round the block the first time and it went from there. I basically ran the routes I used to walk, and when I became able to do that without stopping, I just kept pushing the boundaries further and further.

“I didn’t put pressure on myself in terms of distance and times. I just wanted to get out and enjoy it. I wanted to run and sweat.” 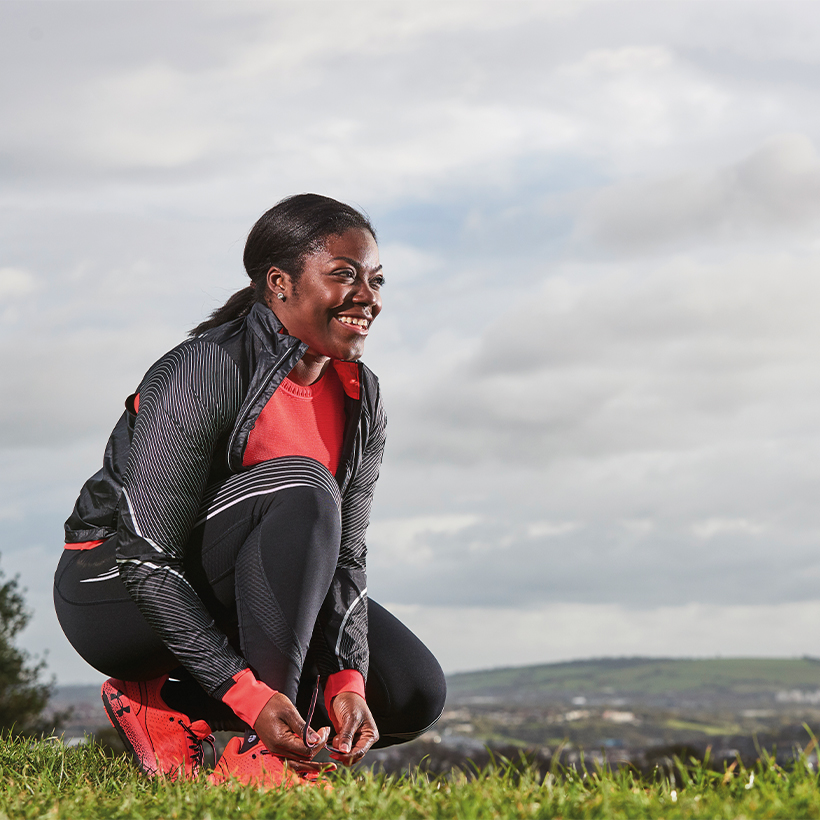 So, Kemi was pretty hooked on running. She was out there six days a week most weeks and then she went a step further forward, completing a run streak of 25 days for Advent 2016. “Well, of course I got injured after that!” she says. “I wasn’t doing the proper warm-up or stretching exercises because I found them boring and just wanted to run.”

A hamstring injury forced Kemi to cut back a bit on her running, something she found really hard because it had become a way of life for her. “I had been doing it all the time, so I didn’t know what to do with myself when I had to pull back. At first, I’d still sneak out stubbornly and do little runs, but I just kept reminding myself I wanted to be able to run for the rest of my life. It was more about that than about running races, so I pulled out of a few commitments, went for massages and physiotherapy and gradually built things up again.”

Racing for the finish

In classic Kemi style, once she started doing races, she didn’t stop. “I started running in 2016 and in 2017 I did a half marathon in Copenhagen and then later that year did my first marathon in Amsterdam. It happened very quickly because I just kept pushing myself.”

Once she had a marathon in the bag, she turned to mountain running. She was invited to take part in a 2018 campaign by Stance where they were trying to take road runners out of the city and introduce them to trail running.

It wasn’t just your average trail run – it took place in Chamonix for a start! “We had a guide who trained us on how to use poles, because there were some very steep bits we couldn’t run up so needed to hike. They also guided us on routes. We ran up to a refuge one day, stayed overnight and then ran back down again the next day, covering 50K in a couple of days.

“I’m scared of heights so I was freaking out about the mountains, but it turned out to be such an eye-opening experience,” recalls Kemi. “I found out I absolutely love running downhill – I go so fast I can’t control myself! I also loved the mountain running because I had to pay attention to what was in front of me and plan where to put my foot next.”

The exhilarating high the mountains had delivered meant that Kemi fell out of love with road running for a while on her return to London.

So there we have it. The journey from beginner road runner to accomplished trail aficionado complete within three years – a path it can take runners decades to navigate. What next, you may ask… 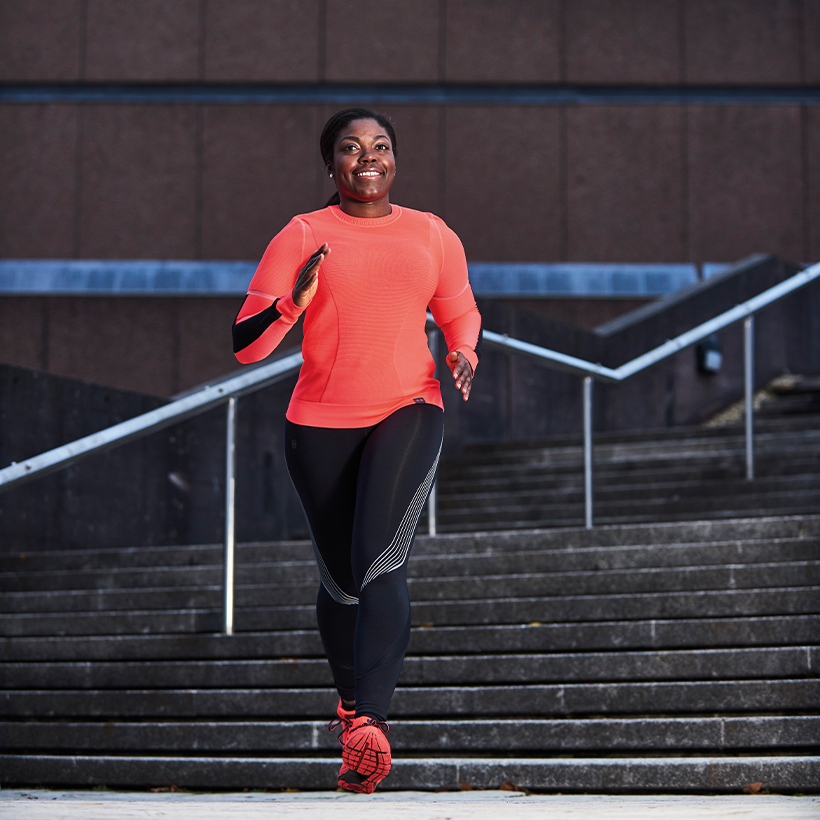 Kemi is now a very keen pacer. “When I was younger I was a natural sprinter,” she says, “so when I first started running I used to try and sprint the whole thing. I had to learn to pace myself and it was a bit of a struggle, so that’s, I think, why I’m so good at it now. I have really big quads, which makes me powerful, so I always do a 100m sprint finish after a long race – if I’ve got enough left in the can, that is!”

She is a regular pacer for many races these days, often for Virgin Sport but for others too. And it’s not just the race-day involvement that she loves: “I really enjoy the weekly sessions where I take people out for training runs too. Of course on race day itself I get a lot of satisfaction and pride from watching people with whom I’ve bonded over the weeks cross the finish line with smiles on their faces.”

This new way of running is replacing Kemi’s need to race through life, with something more social and satisfying. “The urge to beat my time just isn’t there any more – running is more about the experience and being with friends for me these days.”

Having mentored a fair few new runners now, she has plenty of tips for runners just starting out. Firstly, she says, enjoy it. “Don’t be too hard on yourself, chastising yourself for stopping, being too slow, wishing you’d gone further. Enjoy the benefits of running rather than making it hard for yourself. Secondly, keep in mind the reason you started running in the first place – and don’t get swept up in the usual performance traps.” 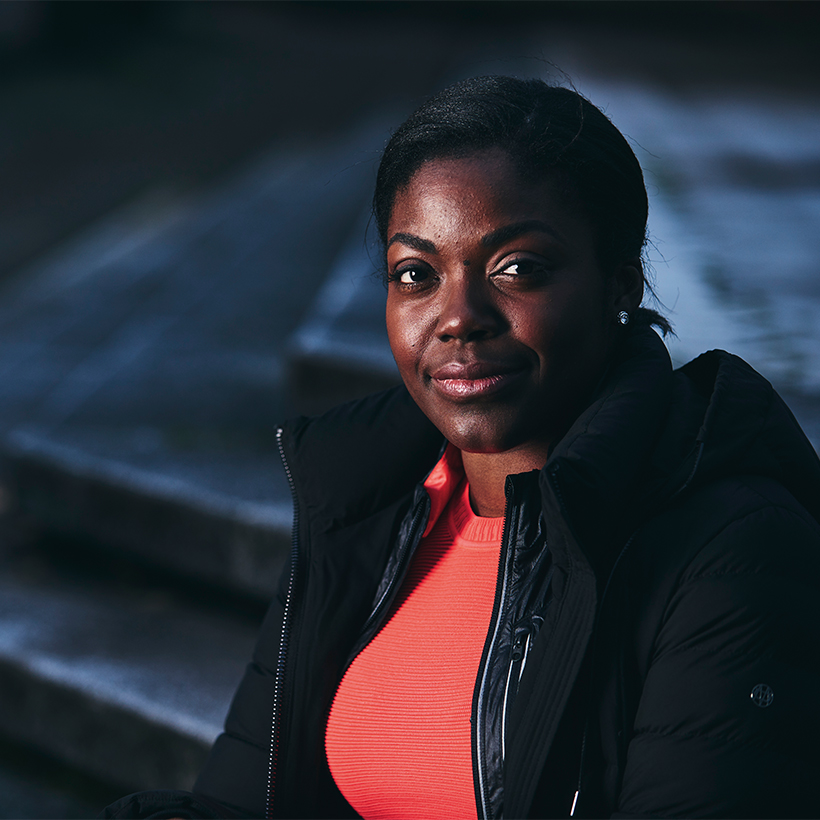 Finally, Kemi advises, try and find your tribe, a group of people you can run with. Because the social aspects of running can be a real motivating factor.

Kemi has vast experience of both solo and social running. “My running started off as a solitary thing but after a while I found my running crews and ended up running with them all the time. This had a huge effect on me – so much so that it then became difficult to run by myself at all. I began to feel like I needed someone around me to keep me going and keep motivating me, which is crazy as I’d run alone for years previously. When I moved house recently, I had no choice but to go back to solo running again, which was hard work for a while. Now I try to mix solo runs with group pacing runs and it gives a better balance.”

But when she’s in Nigeria she always sticks to groups. “I just love the running community – everyone is so nice and friendly. I’ve been able to meet runners here through my Instagram account (@kemmersss) and also – maybe because running is less popular here – if I see someone out running, I just start talking to them there and then. I’ve ended up making a few running friends here; we run together, eat together – it’s really nice.”

She explains about running in Nigeria. It’s a lot tougher. For a start, there are only two times a day when you can run (6.30am and 7pm) because of the heat in the middle of the day (“I did that once and passed out afterwards!”). Also, the dust blows in off the Sahara and gets into your lungs and throat making it hard to breathe properly. And, although it’s flat, there aren’t the kind of paths and open spaces we have for running in the UK. “The pavements break off all the time for access to buildings and because the pavements are high it means you’re up and down a lot and it’s hard on your knees. So I run on the roads which isn’t very safe!”

The love of Nigeria, her family, her passion for running and pacing are all colliding in Kemi’s head right now and she’s got plans she’s excited about. “I have plans to organise a few races myself in Lagos. It’s not runner friendly here so there are barely any races. There’s a marathon that’s been going four years or so, but no 5K, 10K, half marathon race options. I also think there could be an appetite for run crews here, especially for women, so I’d like to maybe set one up.”

Kemi’s friends say she is very relatable for other women. She explains, laughing again: “I don’t look like a runner, you see! I have powerful thighs. Of course, I know you don’t have to look like a runner to be a runner, but the wider public have this image of runners being wiry and skinny and I don’t fit into that. Even my dad says: ‘You do all this running and you’re still not skinny!’ But I’m not running to be skinny! My friends say I will encourage more women who look like me to run and I’m all for that!”