The 2020 US election result should inspire girls and women the world over – not least to get out and run!

After a nerve-wracking wait for both sides of the political coin, news sources announced that Joe Biden was set to become the 46th president of the United States on Saturday. In a history-making election that saw a record turnout, the Democratic candidate and his running mate Senator Kamala Harris claimed victory and sparked hope for young women tuning in to the coverage all over the world.

Vice President-Elect Kamala Harris is the first woman, first black woman and first woman of South Asian descent to serve as Vice President in the White House, and is a vocal supporter of equal rights for all. She made notable waves when she grilled Brett Kavanaugh in 2018 at his Senate Judiciary Committee confirmation hearing in what was described as an ‘epic takedown‘ in the wake of his sexual assault accusations.

Joe Biden acknowledged in his first address to the US as their new President-Elect that it was only right that the government should reflect the diversity of the American people, and the power of that representation has already been made clear. A post began circulating social media yesterday as Californian Wendy MacNaughton shared images of young girls all over the world transfixed by Harris’s acceptance speech.

If you need a boost, a smile or a deep happy cry, I collected photos of girls across the USA (and the world!) watching…

“While I may be the first woman in this office, I won’t be the last. Because every little girl watching tonight sees that this is a country of possibilities. And to the children of our country, regardless of your gender, our country has sent you a clear message: Dream with ambition, lead with conviction, and see yourself in a way that others might not see you, simply because they’ve never seen it before. And we will applaud you every step of the way,” she said.

She jokingly referred to Biden’s ‘audacity’ in choosing a female running mate, and he was full of praise for her in his own speech. He also referred to himself as ‘Jill’s husband’, as is a habit of his, as he spoke of his pride for his partner, Dr Jill Biden, who will become the First Lady in January of next year.

Dr Biden is a successful educator and also, as it happens, a keen runner. It started as a way to fundraise for Race For The Cure, a breast cancer charity in the US, but quickly became a regular activity that she’s kept up for the last 30 years. 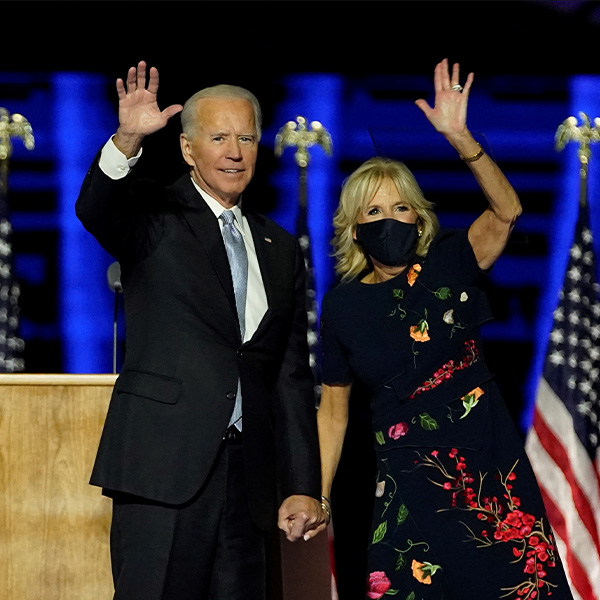 Harris is also vocal about the importance of exercise, telling Barack Obama in a Twitter interview back in September: “I work out every morning, regardless of how much sleep I’ve had.” She claims it’s the best way to start her days, and has been going on six or seven-mile long walks over the lockdown with her partner, Doug Emhoff, who will become the US’ first Second Gentleman in history when Harris is inaugurated.

It’s inspiring to see two exceptionally strong women set for White House occupation next year, and particularly women who can set an example to girls everywhere to stick at exercise, work hard and break down patriarchal barriers. We hope to see a generation of runners striving for great things as a result of the hope that Harris and Biden provide as role models.