"I use every day as an opportunity to create change": Kadeena Cox MBE interview - Women's Running

“I use every day as an opportunity to create change”: Kadeena Cox MBE interview

As the Paralympics kick off in Tokyo, we catch up with two-time Paralympic Champion Kadeena Cox MBE to discuss injury setbacks, using her platform to make change and representing Team GB

Thanks to hardworking para-athletes and campaigns like Virgin Media‘s #WeAreHere the Paralympics has become a much more visible event, creating space for more sporting excellence that’s as exciting for spectators as the preceding Olympic Games.

Athletes like Kadeena Cox MBE, who made British history in 2016 by becoming the first Team GB Paralympian to win golds in multiple sports, are inspiring to me as an everyday runner: just knowing that people can overcome the barriers in their way and become record-breakers serves as encouragement during a tough run.

I sat down with Kadeena the day after she arrived in Tokyo to ask her what it takes to be a Paralympian, how she tackled a year of injury-related setbacks and how she turned her 2014 diagnosis of multiple sclerosis into a way to inspire change in the world.

After bringing home an impressive of haul of two golds in Rio (for the women’s 400m T38 sprint and the women’s C4-5 cycling time trial), as well as a silver and bronze for other track events, I was keen to hear what she was aiming for in Tokyo.

We can’t help but laugh at the sheer absurdity that these are the kind of goals she has in her sights, and she jokes to me that she should have quit while she was ahead. But there’s also a serious side to her, one that never shies away from a challenge, and this determination speaks for itself.

I ask her about training for the Paralympics for both track and cycling events, and it becomes clear that she’s had a pretty rough year of it.

“It’s been a mess! I got concussion last July, which took me out for 11 weeks. Then I got back into training, which was going really well: and I’d done a really good rehab session on my Achilles prior to that, so I had a really good winter.”

She explains to me that she was doing times in October that her team would expect her to be hitting about a month out from the Games, and that she was feeling confident about her performance. But then more injuries started plaguing her, setting her back and jeopardising her chances of flying out to Tokyo at all.

“I tore my hamstring, so I was out for 12 weeks, then tore my calf which took me out for another couple of weeks. And then the last injury that I had was bilateral Achilles tendonitis, which meant that I wasn’t able to run at all for eight weeks. Prior to selection, I think I’d had about two or three sessions – and I wouldn’t even call them sessions! They were more like: “Can she run? Okay, let’s not make her run anymore because we want her to able to race next week!” So it’s been a pretty stressful time. In terms of athletics, I’ve probably had what will have been about five weeks training by the time I get to my race.” 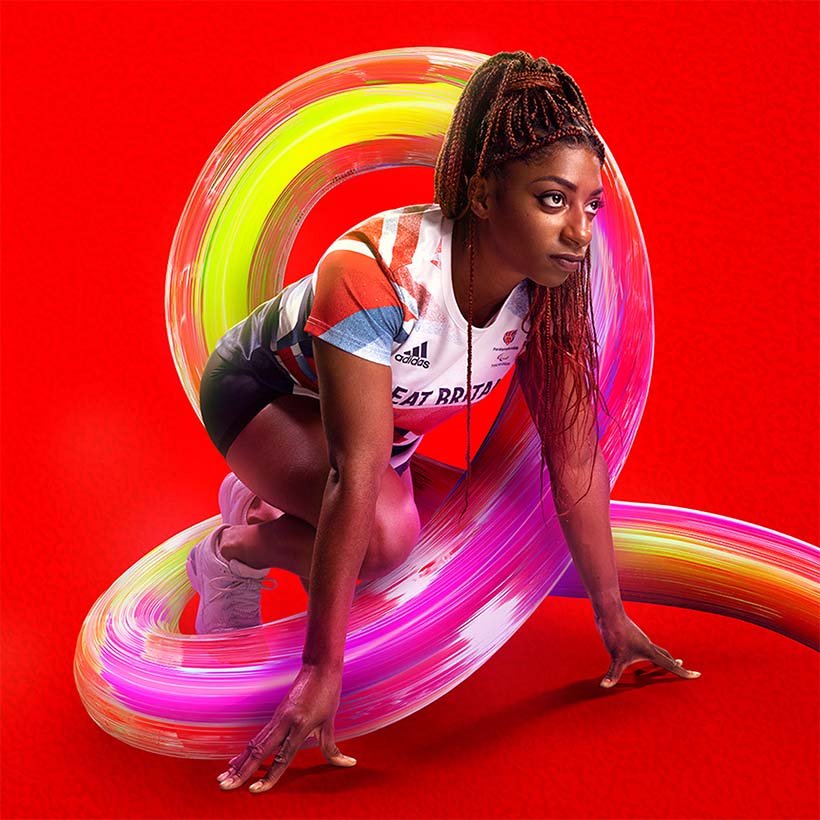 In terms of her cycling training, she’s found the biggest impact of the relentless injuries has been mental. But she’s found support in her family and friends, as well as her fans, to help her through a lead-up to the Games that’s been far trickier than she imagined. She’s been speaking to her family regularly, she tells me…

“I don’t think [they’ve] have quite gathered the time difference, and we need to work that out sooner rather than later! It is challenging, but I’ve been able to talk to my mum and my sister in the evenings and first thing in the morning.”

Social media, on the other hand, is something she’s steering largely clear of.

“I tend to come off social media during the Games,” she explains. “But my management are looking after that for me. I’ve just been on TikTok, which is great because I love dancing, but can also be quite a toxic place! There are some awful comments.”

Kadeena tells me that she’s no stranger to this negativity, and I’ve seen her tackle it myself with strength and grace on Twitter. She’s not afraid to use her platform to speak out against issues like racism and sexism – in fact, she sees it as part of her job.

“I fall into a very small category of people being a black, female, disabled Christian. I can relate to a lot of people, and it does make me want to use my platform for the better. My life changed very quickly in 2014 when I got ill, but I feel like there was purpose in that and I’m here for a reason. I’m living my purpose and using everyday as an opportunity to try and create change and try and help future Kadeenas to have a better experience and a better chance.”

She’s very aware of how rife racism can be in sport, but she isn’t defeatist about it – she’s practical and takes an active stance. She spoke out recently, for example after members of the men’s England football team received racist abuse after the Euro 2020 final.

“The sad thing about that is that, after it happened, I’m pretty sure that every black person knew what was coming,” she says. “[White people] didn’t expect it, and that’s not [them] being racist, but it just shows the ignorance towards it, and not understanding what we have to deal with. Systemic racism is everywhere, and that’s what I want to make change with.”

She’s experienced being treated differently as a result of her disability, too, even as recently as in the lead-up to the Tokyo Games. Though she feels fortunate in some respects to be an ambulant athlete:

“I know a lot of the Paralympic athletes weren’t able to train in the same way that the able-bodied athletes were because they have equipment that was difficult to adapt for Covid times, which they then weren’t allowed to use. They are still elite athletes, but they weren’t allowed to train as much as we did. I’m lucky that I was able to access facilities, but it’s another thing that made me want to create change.”

She takes her role as an ambassador for Paralympic sport seriously. “While I’ve got a voice and a platform,” she states, “even if 95% of people don’t want to listen, it will hopefully help to create some change and leave a lasting thought in some people’s minds.”

Before our time is up, I ask her what she’d say to young women and girls who want to get into sport but aren’t quite sure where to start.

“Just find something that you enjoy, and find something that’s sociable,” she suggests. “If you can get a group of girls together then that’s great. As a young athlete I did everything because I just really enjoyed sport. I’d encourage people to enjoy everything you can while you’re young and specialise when you’re older. There’s no point in doing a sport for the sake of fitness that you don’t enjoy, because you’ll easily fall off – you’ve got to enjoy it.”

Her message is loud and clear: love others, love yourself and love what you do. We can’t wait to see what Kadeena can do in this year’s Games, and we’ll be reporting on her as the week continues.

Kadeena Cox MBE is a Virgin Media-sponsored athlete who will be competing in both the T38 sprint and C4 para-cycling events at Tokyo 2020. Get behind her and the rest of ParalympicsGB by joining Virgin Media’s Wave of Support on social media using the hashtag #WeAreHere. Full details at virginmedia.com