Here are just some of the inspirational people running the virtual London Marathon on Sunday...

In just three days, the class of 2020 take to #the40thrace, London Marathon‘s 40th anniversary and its very first virtual race. Over 45,000 are due to take part in this history-making event on Sunday 4 October, all around the world. From first time marathoners to loving family tributes, 24 hour efforts to celebrating health, life and happiness, here are just a few of the incredible women taking to the 26.2 challenge in their very own way.

Husband and wife team up to run for Leukaemia Care: mum of two Jasmine Barnett will celebrate 18 months in remission when she runs the virtual Virgin Money London Marathon with her husband, Ashley. Diagnosed with a rare form of leukaemia (acute promyelocytic leukaemia) in February 2019, while training for that year’s London Marathon, Jasmine now plans to walk most of the 26.2 miles in Devon with her husband where they will be on holiday with their two young children. The pair are fundraising for the charity Leukaemia Care.

Running buddies run first ever London Marathon together: Cherry Owens, 73 and Christine Armstrong, 67, are set to run their first – and last – London Marathon side by side as they run 26.2 miles across the Isle of Wight. Originally qualified to run the London Marathon in April with Good for Age places, they will be running in support of the charity HomeStart, who support families in difficult times and have helped the local community throughout the coronavirus pandemic. 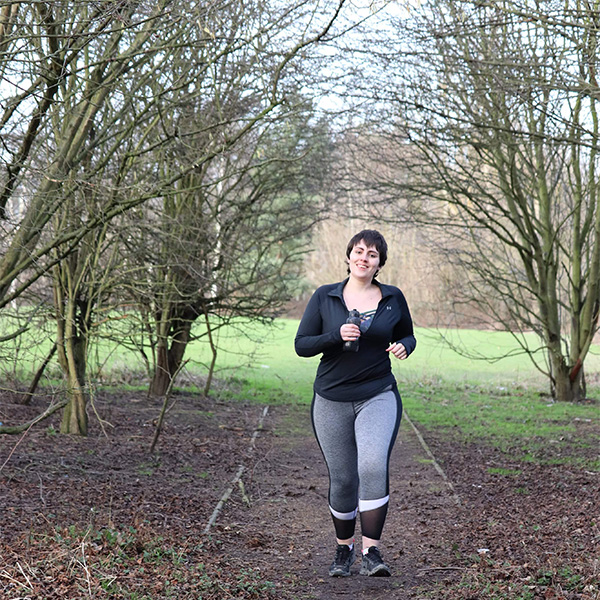 Jasmine Barnett will be running for Leukaemia Care

24hr London Marathon effort: friends Lindsey Underhill and Sharon Sumner, from Stafford, will be running their 26.2-miles across the full 24 hours of Sunday 4 October. Members of their running group will join them, socially distanced, for different legs of the run including a midnight neon 10K to kick things off and they hope to finish by 7pm, when they will run the final mile together. Lindsey is running for YoungMinds, after the charity supported her family through her daughter’s diagnosis with autism, while Sharon is running for the mental health charity MIND.

Family tribute to British judo star: June and Tina Fallon, the mother and sister of British Judo player Craig Fallon, will be walking 26.2 miles for MIND – the mental health charity. Craig, who committed suicide in 2019, is widely regarded as Britain’s best ever judo player and is a former world champion. His mother and sister will finish their London Marathon at the beauty spot in Shropshire where Craig took his own life hoping to raise awareness of mental health.

Running in memory of her husband: Kirsty Makin, 29, from Manchester, is running her first marathon in memory of her husband, Tom, who died from osteosarcoma aged 29 in June 2019. Tom had already fought the disease twice before he died, leaving behind wife Kirsty and two daughters, then aged three and eight weeks old. Kirsty will be running with Tom’s Team, which includes a group of his friends. They have already raised a staggering £52,000 for the charity Sarcoma UK. You can see more about Tom’s Team here.