"I was so focused": Jo Meek on her record-breaking run - Women's Running

“I was so focused”: Jo Meek on her record-breaking run

Jo Meek enters the record books, and runs the Nigel Jenkins Darmoor Round in 14hrs 39 minutes

On the 15th August starting at 0400hrs, Jo Meek ran the Nigel Jenkins Dartmoor Round. She covered the 28 Tors and 74 miles in 14hrs 39mins, improving on the previous time of 16hrs 11mins. This is a new record ­ not just a female record.

She planned thoroughly, recceing the course and this was well rewarded as in true Dartmoor weather the mist, fog and rain remained with her until the earlier afternoon. The route was split up into legs so that she could be crewed and joined by other runners, and many of the previous record holders were at the finish to cheer her on. We spoke to Jo after her incredible record-breaking achievement.

How did you prepare for the Nigel Jenkins Dartmoor Round?

“I have been a runner for many years and an ultra-runner since 2014. Over lockdown I decided I wanted to get to really know Dartmoor. I planned routes North to South, East to West and all the known ways, such as the Abbots Way, Lych Way, half of Two Moors Way and the Perambulation. In hindsight this was great preparation because they were long days out over Dartmoor. It was physical preparation but also navigational knowledge. As soon as I’d set the challenge, I fitted in a long recce run every two weeks. I recovered for two-three days and then resumed training to fit in around work. It worked well as I wasn’t accumulating fatigue.” 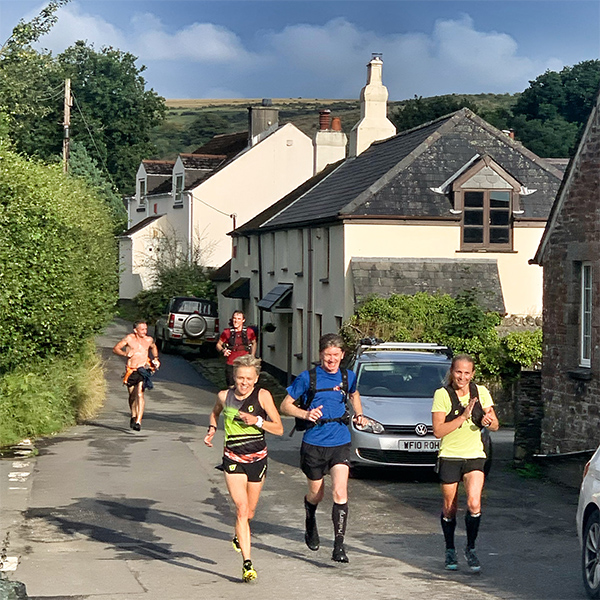 And why did you want to do it?

“I absolutely love Dartmoor and I really want to get to know it. This challenge combined my love of running (a long way) and Dartmoor, and so as soon as I heard about it I knew it was for me!”

Were there any low points?

“To be honest, no. To have nice weather and good visibility was the thing I’d really been praying for, but when my prayers were not answered I didn’t get too stressed about it. I was so focused on my journey to complete the Round I just got on with it. The Round may have been quicker with better visibility but then maybe the heat would have slowed the pace down.”

What did you enjoy about it?

“I organised it so I had company the whole way around and this was hugely enjoyable. I do most of my running alone so having company was really special. Everyone smiled all day and the pub atmosphere at the end was really rewarding.”

What’s your next challenge?

“I still have one race this year which hasn’t been cancelled but I’m not holding my breath. It’s called Les Templiers 78km in France. All my races from this year I’ve moved to 2021 so I’ll get back to focusing on them.”

Find out more on Jo’s blog.