I ran the Virgin Money London Marathon, and this is how I found it - Women's Running

I ran the Virgin Money London Marathon, and this is how I found it

“You know what, it wasn’t that bad.

“But before I get on to that, I have a confession to make. I’m the editor of a magazine about running, and I have massive imposter syndrome. While I am passionate about women’s health, about running, about all of you, and about every word we put in here, I have never actually ever run a marathon. And that’s a hard thing to admit. You guys – so many of you have done this, have run marathons and ultras, have achieved such huge things. So I have always felt like I needed to hide my inexperience. I mean, I love running, I’ve always loved running, but up until the start of the year, the longest I’ve ever run was a half marathon.

“In many ways, I like to think that my love of running and my very ploddy averageness has been a strength, I think: I know that while many of you are big distance runners, there are equally loads of you that are just starting your running journey, or are comfortable sticking to shorter distances, or actually aren’t at all bothered about how long you run for – you just want to get there. Lots of you don’t race – and why should you? – you run for the joy of it, for your mental health, and for your me-time. Me too! My passion for running in all its forms – the kind of running I can do, and the kind of running that seems impossible, incredible, out of reach – means I like to cover all bases in the magazine and our website.

“But when I decided to take on this marathon – my first marathon – I wasn’t sure I was going to tell you. I was ashamed. I felt I should pretend that I was race experienced. Two people, however, have persuaded me to talk about it: “you should share your marathon journey!” they sort of said. “Everyone will want to know!” That’s sweet. I’m realistic, though – I know that not everyone will want to know. But at the same time, perhaps it might be helpful for some of you out there who watched the marathon on Sunday, and who have been inspired by those of us who took on the virtual race. Honestly: if I can do it, you can do it too.

“This is my experience. 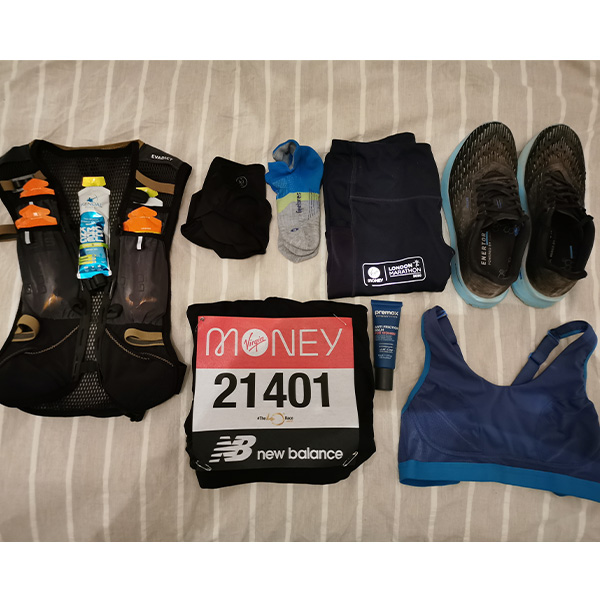 “In October 2019, I decided to run the London Marathon. At the time it was earmarked for April, as it normally was. While I’ve always run regularly since my early 20s (I’m now in my mid-40s), I’ve also always been plagued by injuries. Calf strains, bursitis, that sort of thing. I didn’t think the marathon distance was for me. But when the opportunity came up, I knew I couldn’t turn it down: I’m from London, my mum ran it back in 1984, I have history there. Plus I knew the ballot was a nightmare, and I’d been offered a place – how lucky is that? I couldn’t turn that down!

“I started slow, building up from 10K as my longest run, until I was comfortably at 10 miles by Christmas. I added a mile a week, put in tempo runs, hill sprints and strength work. From 10 miles onwards, I started experimenting with gels. All was good.

“Then, in late Feb, my longest run got to 18 miles. On that run, because of one thing or another, I developed an achilles injury. I calmed down my training ahead of the Bath Half in March. I ran that – got a PB in fact – but properly destroyed my achilles; I was hobbling for a fortnight. When the London Marathon was postponed I was upset for everyone else, but genuinely relieved for myself – there was no way I’d be race fit in time for April.

“In my head, I didn’t think the new October date was going to go ahead. So over the spring and summer, I took the time to heal, and dropped my mileage right down, just running for my head – as many of us were doing during lockdown. And then the virtual was full steam ahead, shocking me out of my comfort zone. Because the decision was made two months ahead of race day, my immediate thought was, “oh okay, I’ll do it – but I’ll walk/run it.”

“Lisa Jackson, the author of Your Pace Or Mine, is a long-term contributor to Women’s Running and a huge fan of the walk/run method. I’d spoken to her about it and how to use it myself, and it felt like the sensible way to approach marathon distance when I didn’t have the miles in my legs.

“But the wicked devilish voice from my other shoulder started tempting me to see what I could do. I started adding two miles a week – just to see. 8 miles – that was fine. 10 miles – yep, fine, but shouldn’t have had a drink the night before. 12 miles – fine. 14 miles – fine. 16 miles – hard. 18 miles – hot, tough, never-ending, ran out of water. 20 miles – last mile was agony. But I’d done it. The longest run. The idea of running a whole marathon now seemed tantalisingly achievable. Sort of. Maybe. 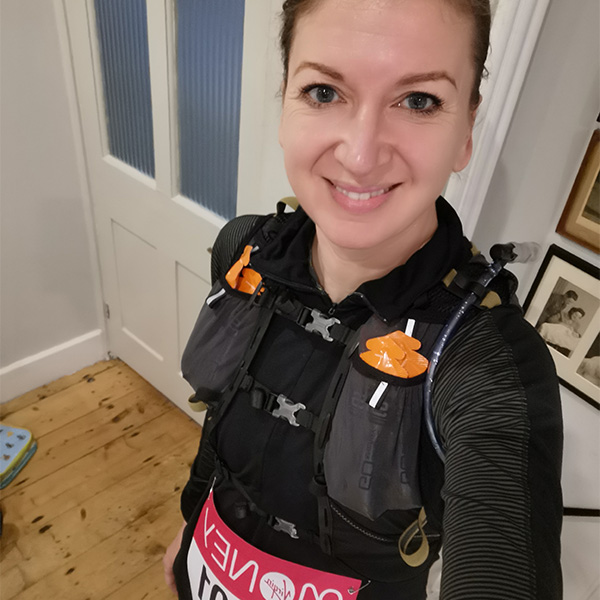 “That left me a taper of just two weeks, where everywhere I looked said we should have three. But I just needed to get above 20 psychologically.  So then I tapered like a pro. And in the very last week, I stopped strength training too, and properly rested. Loads of carbs – even actual white carbs (properly lovely).

“So on the morning of the race, I felt the healthiest I’ve done in a long time. I felt strong, I felt fit in my lungs (coming from an asthmatic, that means a lot), and my legs felt good.

“But I didn’t do any of them. And my body wasn’t lying. So over the past few weeks of training, these are the things I did that made it all work out.

“I started slow. Everyone says it. Everyone’s right. The only miles I focussed on pace were the first four, and every time I looked at my watch, I dropped back a little.

“I had practised my gel strategy. And I limited it. I’d felt sick after taking seven of the blighters on my 20-miler. So I had a bigger breakfast, started with gels a lot later – from mile 6, and took one every three miles. I had a caffeinated one in reserve, which I took at mile 20 – that one had broken and half of it had run down my leg, but in fact I really only needed a little bit, and it really helped. I used Precision Hydration powder in my water for electrolytes, which meant I could stick to mostly simple gels that just delivered carbs and nothing else.

“I asked some friends and family to come and meet me at three different points on my out and back course. They met me at four, and it was wonderful to see them. The last time I saw them before the finish was with just two miles to go, and I really needed that lift.

“It was piddling down. At the last minute, I wore a cap, which I never do. Everyone says not to change what you’re wearing on the day. I agree with this mostly, but in this instance, everyone is wrong. The cap was a godsend.

“A friend of mine told me to wear mascara. That’s so vain, isn’t it? But I did, and I’m glad I did, and it added a tiny element of confidence. Every bit of confidence helps: if a bit of mazza does that for you, then wear it. But make sure it’s waterproof. That’s all. 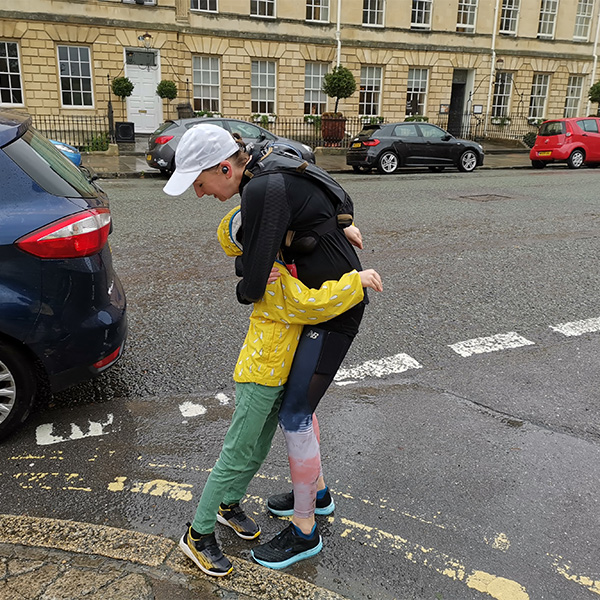 “What I hadn’t practised, but what made it utterly joyful, was the support from pedestrians and drivers – I was honked (in a good way), and there were loads of “well done!” and “good luck!” from cheerful walkers, and also from fellow marathoners: we would spot each other’s numbers and grin hugely from ear to ear: “Keep going!” “you can do it!” “well done!”. One marathoner – a very fast chap –  lifted both arms as he ran towards me in a celebratory salute, clutching Lucozade bottles aloft.

“And so I did it, I made it to 26.2. And possibly a little further too: my Garmin wasn’t quite in step with the London Marathon app, so while my husband was shouting at me: “you’ve done it! The app says you’ve done it!” as I hobbled towards him along Great Pulteney Street in Bath, I just ignored him and plodded on past. Because, as you all know, if Garmin and Strava don’t say you’ve done it, then the run never existed in the first place. Right? Any mistakes? Yep, a few.

“Not walking for ten minutes after the finish. My legs have been like lead for three days.

“Not wearing gloves – I lost feeling in my fingers and opening gels was a nightmare.

“Not putting gels in some sort of dry pouch: puffy, wet, numb fingers and wet, slippery gel packets are not a match made in heaven.

“It was remarkably pain-free. It turns out that just the right amount of training, and really nailing the nutrition can really do the job. It just wasn’t that bad. Promise.

“So that’s it. Am I signing up for another one? Well, I’m already down to do London next year, so yes! I have history with that place – I feel like I’ve got the capital in my sights, and I just won’t let it go until I’ve done it. Who’s with me?”

Next year’s Virgin Money London Marathon takes place in the autumn, on Sunday October 3 – and the ballot for entries is open now!

Places will be confirmed in January 2021. The ballot is free to enter, but closes at 17:00 this Friday 9th October – so now’s your chance. Be part of something amazing!