"I got into running a lot later in life": Helen Davies interview - Women's Running

“I got into running a lot later in life”: Helen Davies interview

Having represented Great Britain and England, with a hat-trick of wins at the Brighton Marathon under her belt, Helen now has her sights firmly set on London

I got into running a lot later in life. I was okay at running in school, but when I was there it wasn’t something that was picked up on too much. There was a cross country club that no one turned up to. I’d get put down for all the running events at sports day, but I never really pursued it.

I discovered running again in my mid-20s by accident. I started renting my first house and I couldn’t afford the gym, so I started running because it was free and accessible. I carried on doing that until a friend persuaded me to do a 10K in 2003. So I rocked up and finished third in the women’s race and was like “oh ok, I can do this!” Then I carried on for another year, did the same race, and did it a couple of minutes quicker. Someone from the local running club approached me, and persuaded me to join them. At the same time, I wanted to do the marathon, and I thought a club could help me. I then quickly progressed by getting good advice and understanding how to train properly. At one track session I was introduced to Clive, a run coach, and he started coaching me for my first marathon and that’s where the journey began.

In 2006, I did my first marathon in 2hrs 56 mins. Two years later I ran it in 2.47 and was selected for Team England. From there, I was selected to run for GB in the 2010 European Championships and the 2010 Commonwealth Games. That’s when I gave up my full-time job to concentrate on competing. Having my boys gave me a five year break from running from 2012, but within six months of my second child being born, I was doing a 10K and running around 35 minutes, and the progression started again.

That lead to doing the Brighton Marathon in 2017 and winning that race in 2.42. Then I ran it in 2.38 the following year, and was selected for England again, 10 years after my first selection. In 2019, I ran Brighton in 2.35 and was selected for British Athletics to represent Team GB at the World 50K Championships where I was a silver medallist.

That was September last year. Now I’m building up for the London Marathon – I’m returning this year having not run it since 2012. 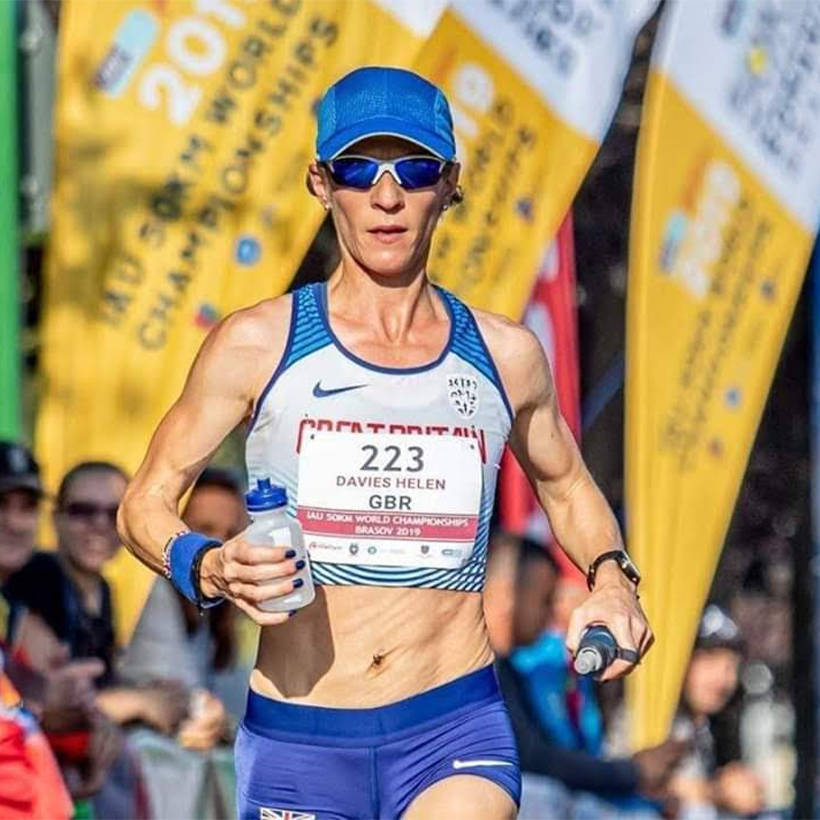 What was being selected for the Commonwealth Games like?

It was just amazing. And very different! We stayed in a holding camp for 10 days before the games in Doha, which was strange and so hot, and then transferred into Delhi about five days before. It was a strange environment – you’re in this little bubble. When we were in Doha we couldn’t see what was going on in the games, so we felt really out of it. Because the marathon is the last event that’s run, all the athletes were disappearing from the hotel before we ran. But I finished eighth there and survived it!

Every experience I’ve had to run for my country has been amazing, it’s living the dream. For someone who lives and breathes running, to be in the situation that that’s all you’re doing 100% of the time is just amazing.

What are you running this year?

I’m doing London this year. There was no reason to do it last year as my time wouldn’t have been quick enough to be selected for anything. So I decided to do the hat-trick in Brighton instead and it was a great event. Then the plan was to do London this year when we knew it was going to be very competitive. I’m sad to not do Brighton; it’s got a special place in my heart having gone back there in 2017 for the first time since having kids. There’s a real buzz about that marathon; the city comes alive and they treat the athletes so well. It feels more intimate than London. And when I returned people knew me and supported me all the way round. 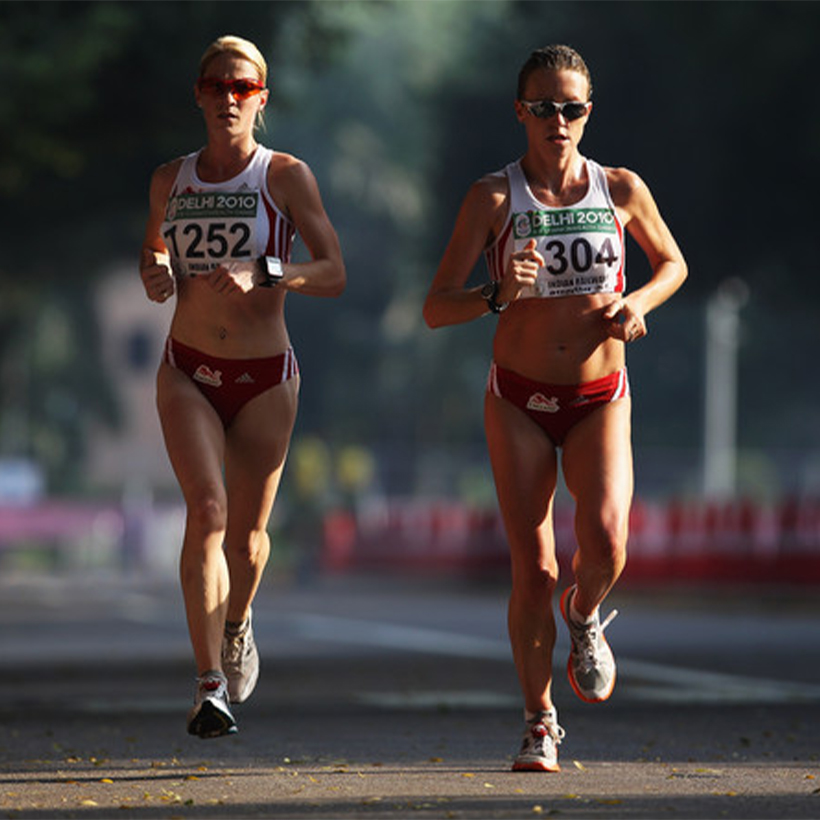 How do you think long distance running has changed since you started competing?

A lot of that was around London landing the Olympics. There was a dip in marathon running, and my coach spotted the opportunity in 2010. He said: “do you know what, if we can get this right, there’s a window of opportunity as the qualifying time was 2.38”. He said that, at that time, there were only six women in the UK that could do that sort of time.

At the time I working for the National Trust, and they let me reduce my hours which allowed me to do what I needed to do, giving me the opportunity to pile on that training and do a little bit more. And then in 2010 I smashed that time in 2.36.56 and was third British woman, but in 2011, they’d lowered the time and I missed out on qualifying by just 40 seconds. Then in 2012 everyone came out of the woodwork!

British Athletics lowered the qualifying time to 2.33 in the 2012 London Marathon. They’d already pre selected Paula Radcliffe and Mara Yamauchi for the Olympics, and only three women were allowed to run, so there was only one place up for grabs and that was highly competitive. I should have run 2.31 or 2.32, but it didn’t happen for me [Helen ran 2:34:11 and achieved a PB]. It certainly has been interesting to watch this in marathon running in the UK – so many more women are doing it and smashing it.

I’m not in contention for running a qualifying time in London this year. There are five women running in the 2.25-2.27 time. I’m just really excited about a race that will pull me round in a competitive time. It will be fun! 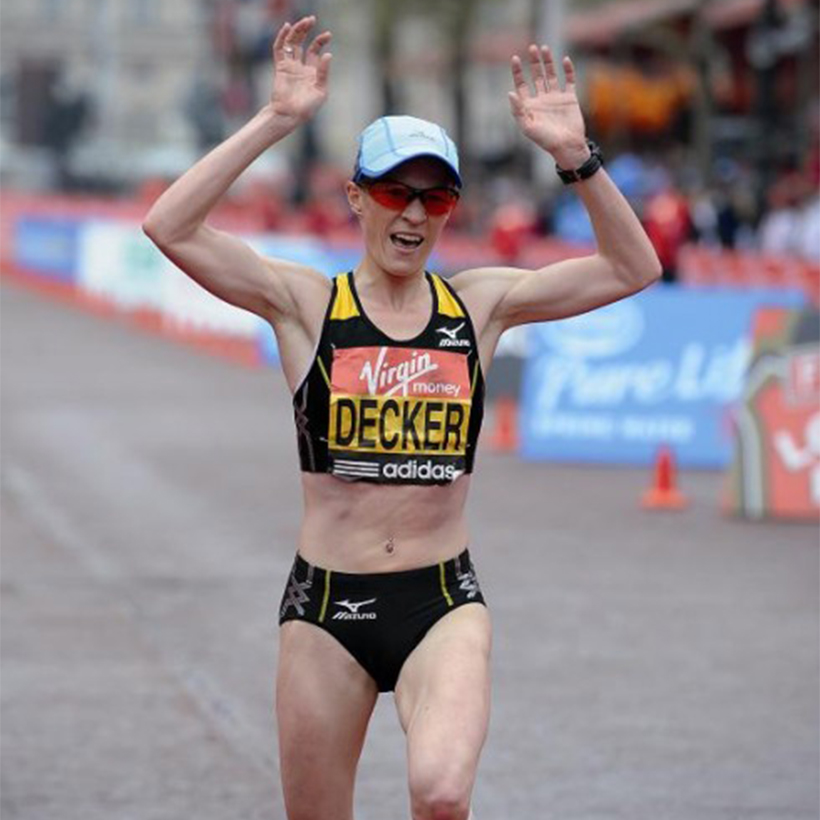 What runners do you admire?

Well obviously Paula Radcliffe, she’s my heroine. I’ve been hugely privileged to spend a lot of time with her. And Kelly Holmes – she has always been one of those ‘never forget’ moments for me, when she did the double after all she’d been through. Reading her book is such an inspiration. I did a race in Tunbridge Wells in 2010, as part of my preperation for the London Marathon, and she was there. So I took my book along for her to sign, and it was chucking down with rain and I was in a bin bag. She asked me why I was racing, and I explained I was hoping to qualify. She was an ambassador for the Commonwealth Games, and said “I might see you there!”. And then she wrote in my book “never stop believing”. And low and behold I did qualify and did see her there!

More recently, people like Sinead Diver have been really inspiring. She’s 43 with two young children and last year she ran 2.26 at the London Marathon – she only took up running after having her kids. It’s lovely to relate to her and how she manages her family life. There are no excuses now!

Can you tell me what your next adventure is going to be?

I really enjoy doing the 50K world champs. I wanted to do the 100K but I’ve been talked out of it by my coach, who feels that I will be doing myself a disservice when I should still be concentrating on the marathon. The plan is to try and run a time that I know I’m capable of running, if everything goes to plan. In between that, I’d like to try and bring my 10K and half marathon times down. I’d like to give myself a chance on a flat and fast one like Berlin. Then tackle a spring marathon the following year and get selected for the 50K championships for 2021. But right now, the focus is running a fast autumn marathon in London, really. 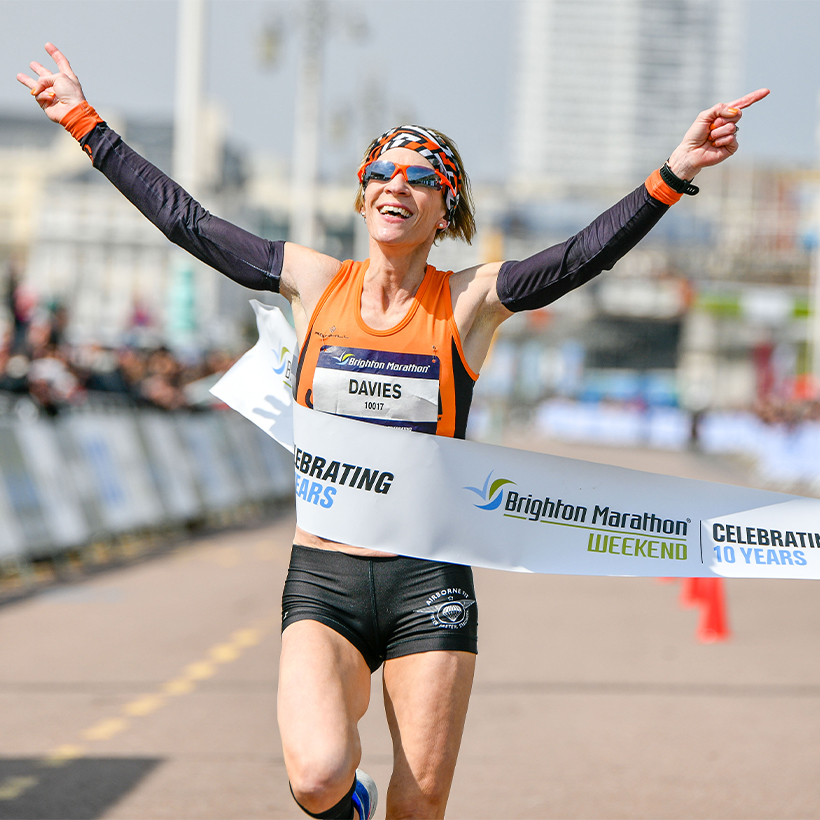 What advice would you give someone running a marathon for the first time?

Enjoy it! Just enjoy it and take it in, and stick to your plan. A lot of people have these perfectly executed race plans and they get caught up in it, and go off too quick and it ends up not being a nice experience. Know your fuelling strategy and practice with your drinks and your fuelling plans, and do a practice run in your kit.

And don’t forget your mental toolkit. It’s basically your little box of tools in your head to keep you going. Whether it’s a positive quote from somebody or just thinking about somebody who’s really important to you, thinking about the finish line, visualising a big plate of fish and chips, thinking about all the training you’ve done. You can pull yourself through that. Just concentrate on one mile at a time and tick them off. Listen to all the crowd and get them to spur you on. Just enjoy it and say to yourself “I am bloody amazing!” And remember that feeling when you cross the finish line – you’ll forget everything else immediately afterwards. And keep your medal in your back pocket to show everyone!