Fiona Russell spoke to the record breaker today, after she completed her epic run

Carla, 36, said: “I am over the moon. It was the hardest and most painful thing I have ever done. I am so happy to be finished.”

The Team GB ultrarunner from Buckinghamshire set off from the most southerly point in mainland Britain on July 16. She ran an average of 73 miles each day and for between 16 to 17 hours, and she slept only four hours a night. She pushed through last night to finally finish at 5.30am today.

She said: “For the last week I have had very painful legs. I have never felt pain like it. I had thought it was a tendon issue in my shin but it was then diagnosed as cellulitis, which is an infection. I am being treated for it by the doctor in my support crew but it has meant I can’t lift one of my knees.” 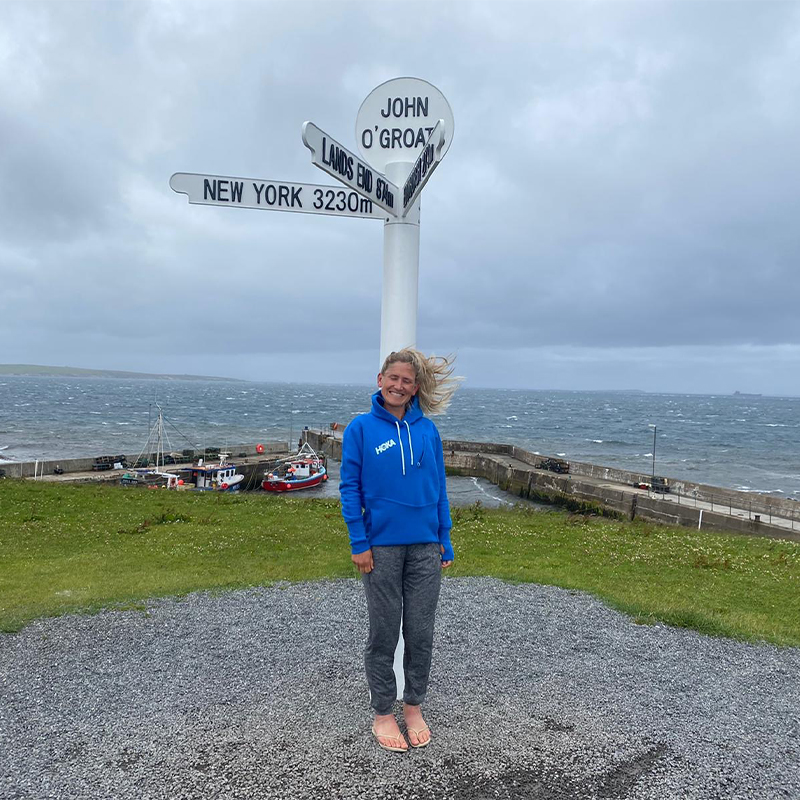 She described the final day as “horrendous”. She said, “The weather started dry and sunny but it deteriorated to a strong side wind and driving rain. It was horrendous. Because of the infection, I couldn’t run. It was so frustrating. I had to walk the last 50 miles to John o’Groats.

“I walked on and on through the cold and the dark trying not to fall asleep on my feet. I wanted to get to the end so much.”

It was during Covid-19 lockdown that Carla, who grew up in South Africa, decided to take on the Land’s End to John o’Groats (LEJOG) challenge. She said, “I had plans for races but they were all cancelled. I had hoped to do the LEJOG in 2021 so I just decided to go for it this year instead.” 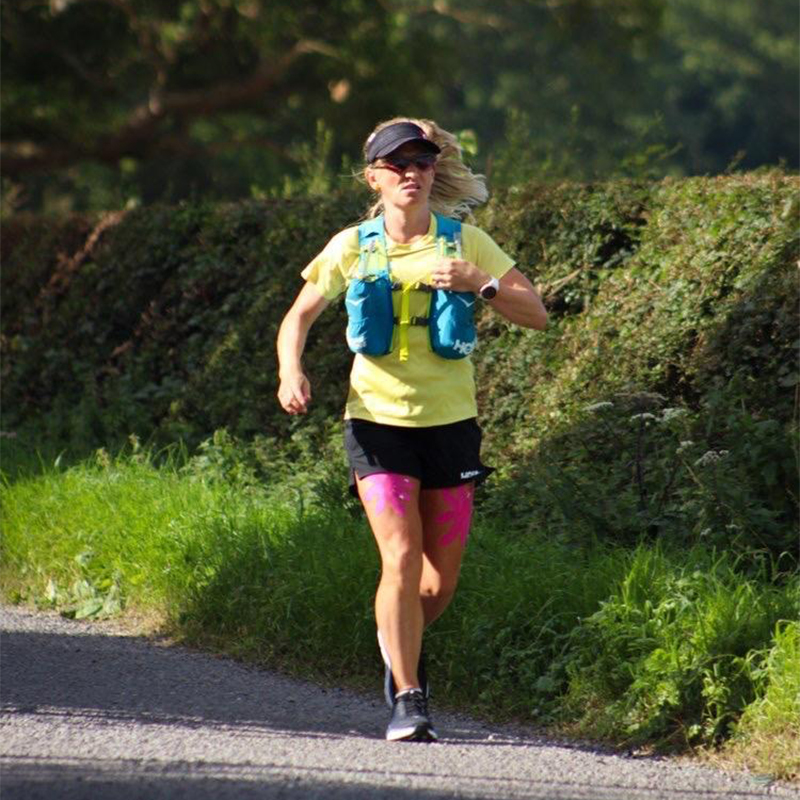 It was a far tougher undertaking than she had envisaged. She said: “The tarmac day after day was brutal. My legs suffered so badly and each day they would seize up in the afternoon.

“It wasn’t much fun either. Other long-distance challenges I have done allow you to chat, laugh, stop for a coffee, whatever, but this was relentless. All I could focus on was getting on with it. I just had to keep going.”

Carla describes a section in the Pentland Hills, near Edinburgh, as a highlight. She said, “It felt wonderful to be on grass. The descent was on bog and moss. It felt like I was running on marshmallows and that was amazing after being on the tarmac for so long. The views over Edinburgh, to Arthur’s Seat and the three bridges over the Forth were fantastic.” 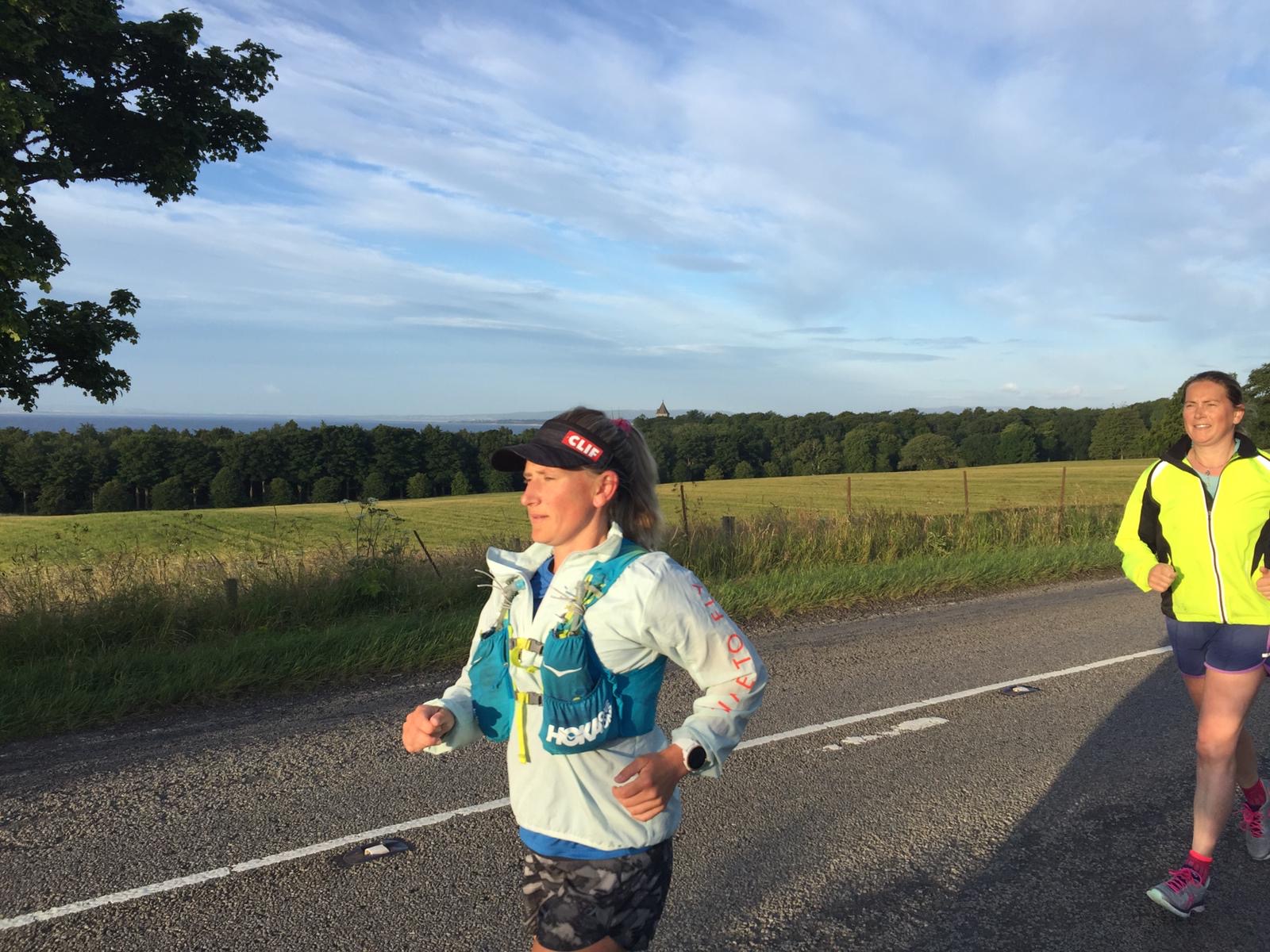 She believes that she was fortunate that everything went well. She said, “There are many things that could go wrong on a challenge like this. Everything had to come right for me to break the record.”

Carla gave praise to her supporters and crew, including her sister Andrea and brother Mark. She said, “I could not have achieved this record without my support team. They have been amazing. They have allowed me just to focus on what I needed to do day to day. They have fed me, massaged me, cycled with me and been there when I needed to lie down. It has been wonderful to have so many people come along and run with me, too.”

Carla had hoped to finish on her birthday, which was yesterday (July 27). “I knew when I started yesterday, I would not make it to the end that day,” she said. “But I did keep going through the night so, technically, I am saying it was still my birthday when I got there. I don’t think I want to do anything like this again on another birthday. If I suggest anything similar, I hope everyone will tell me just to go for a spa day.”

Carla’s time, which was recorded by Open Tracking, will need to be ratified by Guinness World Records.