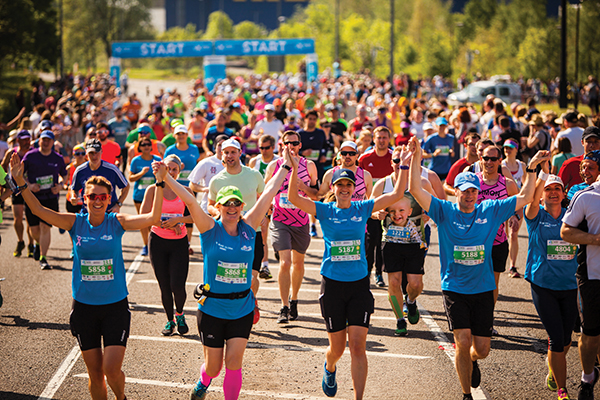 The results are in! Discover the best races, as judged by you our readers: from the finest 5k to the most unbelievable ultramarathon. Read on, sign up, and attack your 2019 goal!

Shoot for the stars on this rapid Rocket run. May 2019 brings the next rocket-fuelled 5k to Stadium MK. The super-speedy, mostly downhill, route has great PB potential and it’s an opportunity to experience the buzz of MK Marathon weekend without the extra mileage. The 5K takes place the day before the MK Marathon and is suitable for runners age 13 and up. Run the Rocket 5K and a main event the next day to gain the awesome MK Challenge Medal.

The Vitality London 10,000 has established itself as one of the UK’s most iconic 10K races. A fast and flat course, 2018 saw a record-breaking 14,000+ runners cross the finish line and Sir Mo Farah lead the elite field line-up. The course passes some of London’s most famous buildings including: Buckingham Palace, St Paul’s Cathedral, the Old Bailey, Big Ben and the Houses of Parliament. In Green Park the Vitality Wellness Festival hosts free events and family-friendly activities including coaching sessions in a range of sports and taster classes. Entry is now open for the 2019 Vitality London 10,000, on Monday 27 May.

The MK Half Marathon traverses tree-lined city boulevards before running through the lush Ouzel Valley following the beautiful, meandering River Ouzel onto Walton Lake, one of the richest spots in Milton Keynes to enjoy wildlife, and then onto the very picturesque Caldecotte Lake, before a superb stadium finish.

Founded in 1981, the London Marathon course starts in beautiful Greenwich Park and takes runners past the city’s famous sights, including Cutty Sark, Canary Wharf, Tower of London, Nelson’s Column, and the Millennium Wheel, before finishing in front of Buckingham Palace. In 2018 the Virgin Money London Marathon raised a record-breaking £63.7 million for charity, setting a world record for an annual single-day charity fundraising event for a 12th successive year. On Sunday 29 April 2019, around 75 per cent of the 40,000+ runners will be raising money for charity, adding to the incredible total of £955+ million raised so far by the event.

RACE TO THE STONES

The flagship event in the Threshold Trail Series, Dixons Carphone Race to the Stones is a 100K ultramarathon along the Ridgeway, from Lewknor in Oxfordshire to the Avebury Stone Circle in Wiltshire. More than 2,500 people of all ages and abilities walk, jog or run the route, either non-stop or over two days, camping overnight. It is fully supported with a sign-posted route, regular pit stops, medical support, delicious hot food, showers, plus entertainment and massages at basecamp.

First run in 1970, the New York City Marathon is one of the six World Majors, but it’s also officially the world’s biggest marathon, with more than 50,000 runners and sometimes double that in applications. The course takes runners through the city’s five boroughs.