The surfing destination that’s creating a safe space for women

Surfing might not be the first thing you think of when you hear the term 'social impact', but The Wave is doing just that; helping to make BlueHealth more accessible to as many different communities as possible. We chat to founder, Nick Hounsfield, to find out more...

I live in Bristol, so I first heard of The Wave through a story in a local newspaper: first inland surfing lake of its kind to be built on the outskirts of the city. I’ve only ever surfed once before. I was truly terrible at it but loved every moment, so I popped The Wave on my List of Things To Do At The Weekend and assumed I’d get around to it.

Working at Women’s Running definitely has its perks, and one of them was an invitation from our friends at FoamLife (if you haven’t seen their flipflops in the mag, they’re buttery soft, utterly comfortable and won our Eco Champion award) to join them for a day at The Wave. I jumped at the chance to tick off something on my list, and grabbed my wetsuit. 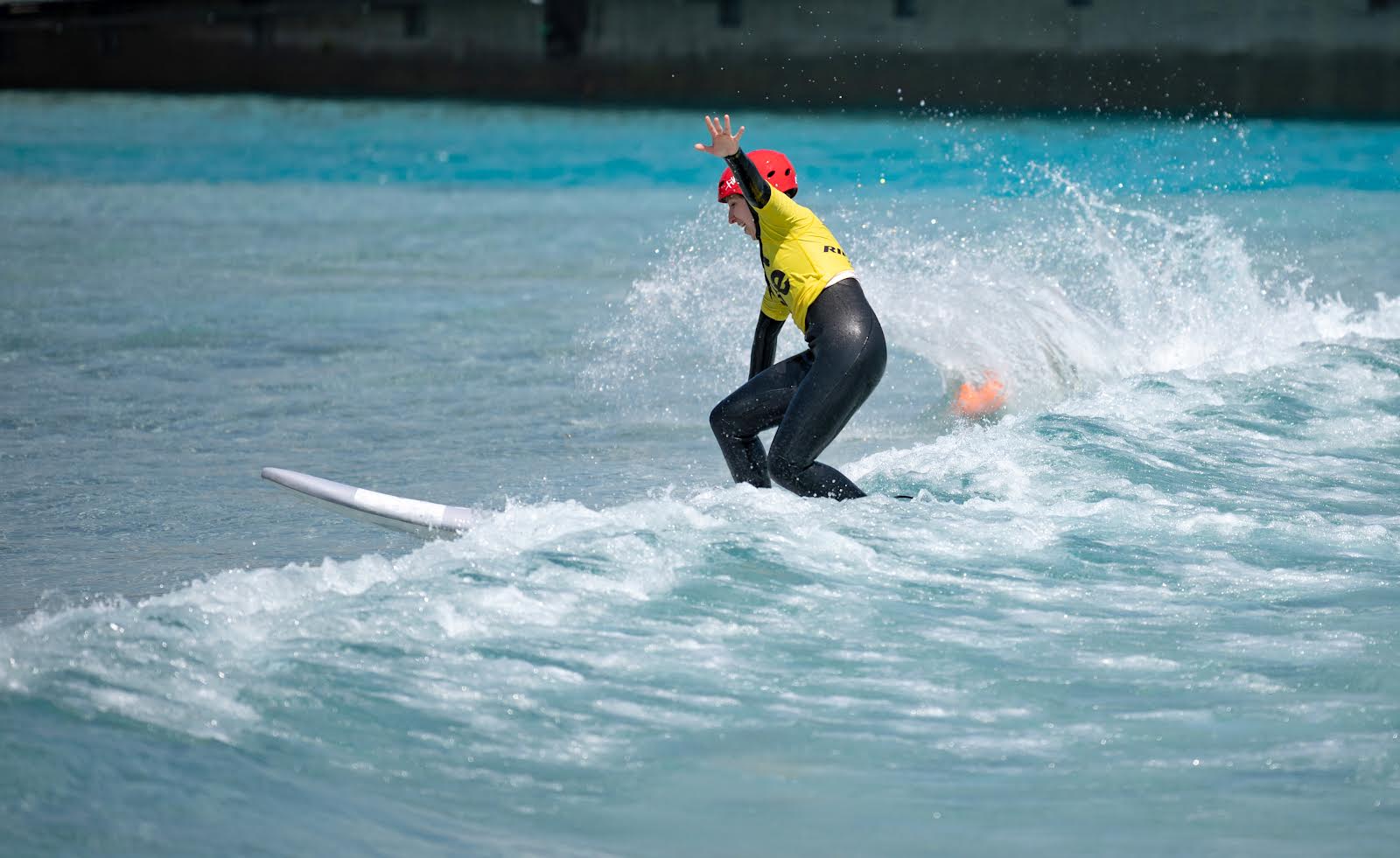 I had a beginner’s class and absolutely loved it. The instructors were so knowledgeable and friendly, and I much preferred falling headfirst into the crystal blue waters of the lake instead of the salty sea. (Perhaps one of the reasons I fell quite as many times as I did was the fact that a certain actor called Benedict Cumberbatch also happened to be enjoying a surf session at the same time – in a more advanced section of the lake, of course!). Each of area of the lake is suited to different surfing abilities, thanks to clever Wavegarden technology, so I felt safe from being bumped into by faster-moving surfers, and could see what I was aiming for as I progressed.

Surfing lesson complete, we sat down for lunch with founder of The Wave, Nick Hounsfield. You might have heard his name before; he’s the former sustainability director at the Eden Project, and a founding member of the environmental group Surfers Against Sewage. And it was during this chat that I realised that The Wave is not just a Thing To Do At The Weekend; it’s a destination with purpose who is striving to make change. 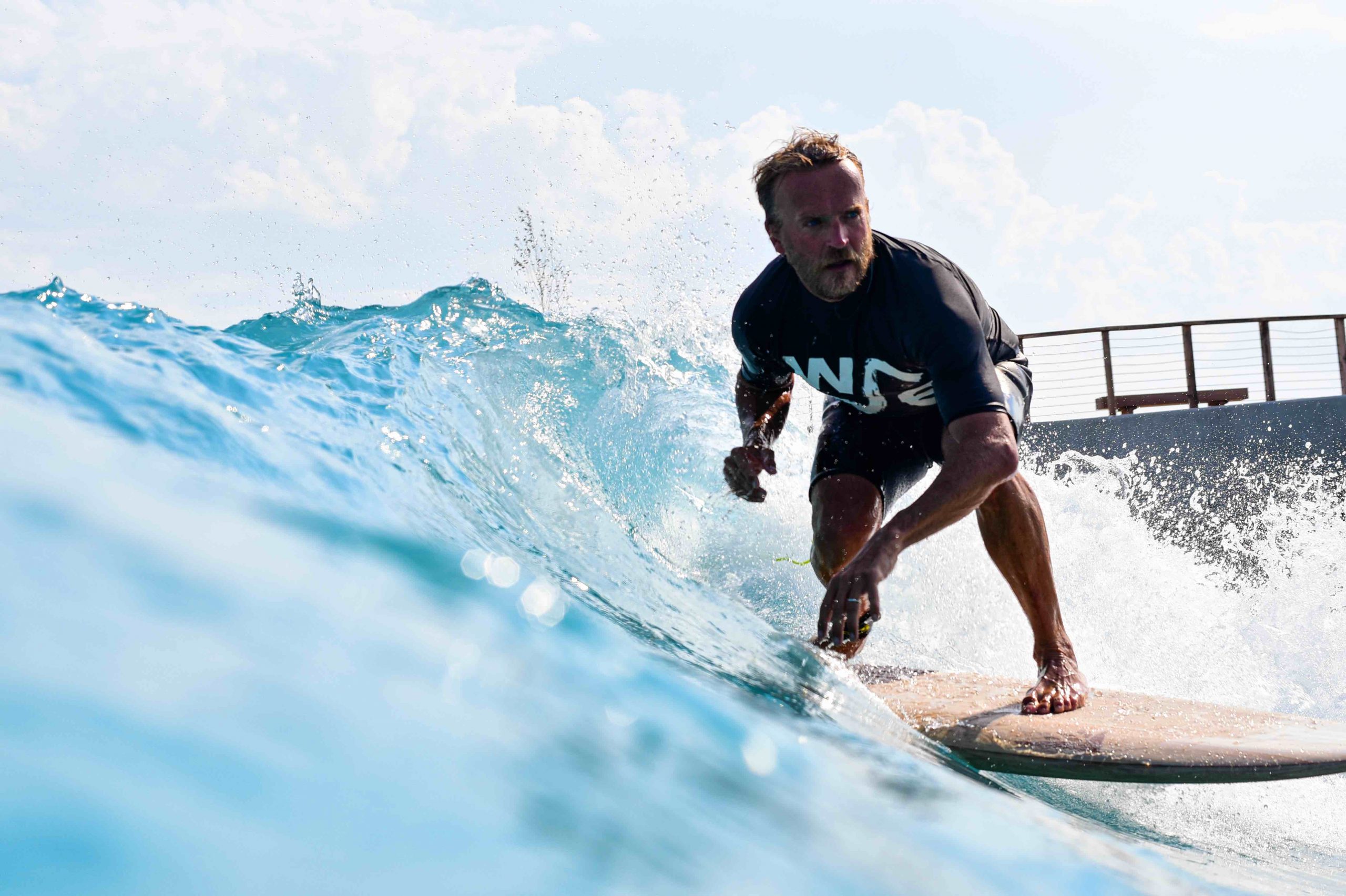 “We founded The Wave in 2012 with the aim of bringing year-round, consistent surfing and its benefits to a safe inland environment for both beginners and experts,” says Nick. But it’s about far more than just surfing. “The activity itself is a tool to start having conversations about wellbeing. We want to make social impact through projects that improve the quality of health in all communities by providing green and blue outdoor spaces that can both educate and rehabilitate.”

So, how do you go from surfing lessons to social impact? Nick explains: “Firstly, we’ve set up different ‘waves’, as we call them – waves of support, waves of change – to widen the demographic of the people who use our space. We’ve asked ourselves how we can get more women in surfing? How can we support the BAME community? How can we help those who are suffered during COVID? How can we make our experience more adaptive for those who are disabled?” 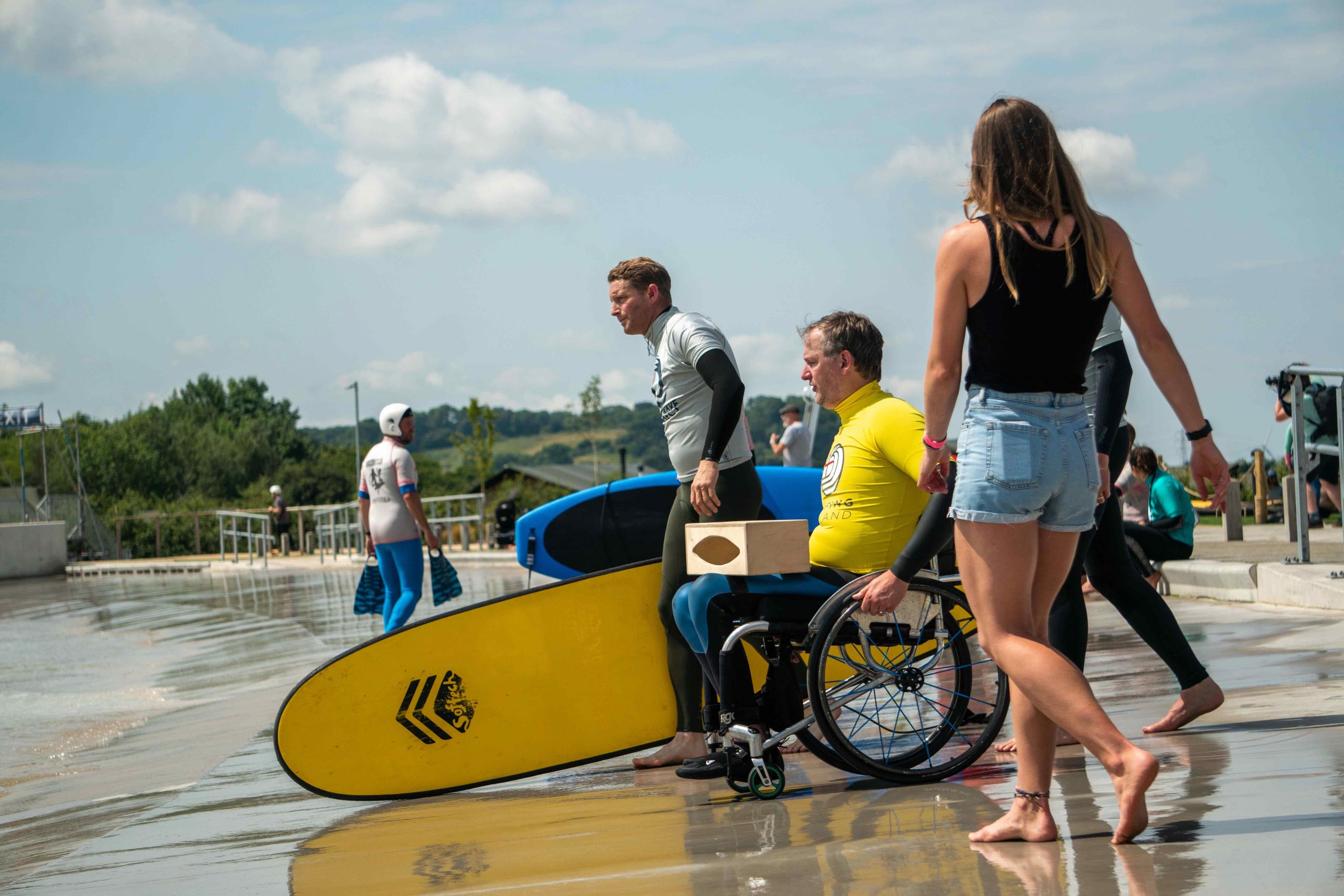 And these questions yielded actual, practical answers. “Obviously this year was the first time surfing has been in the Olympics, which is great, but we want to take that one step further with the inclusion of surfing in the Paralympics.” This year, The Wave hosted the English Adaptive Surfing Open. “It is the perfect way in which we can create change,” says Nick. “We can bring the people who make those decisions here and really showcase the incredible surfers and how engaging it is as a sport.”

Last year, The Wave also worked with The Wave Project to launch surf therapy for young people in Bristol. “Those who had been referred arrived feeling so anxious,” Nick remembers, “but by the end of the first session it was smiles all round.”

“We’re also launching some women-only surfing sessions,” says Nick. “It really does change the whole atmosphere here and we’ve already had feedback saying that it makes a relatively male-dominated sport so much more approachable to women who have never surfed before.” 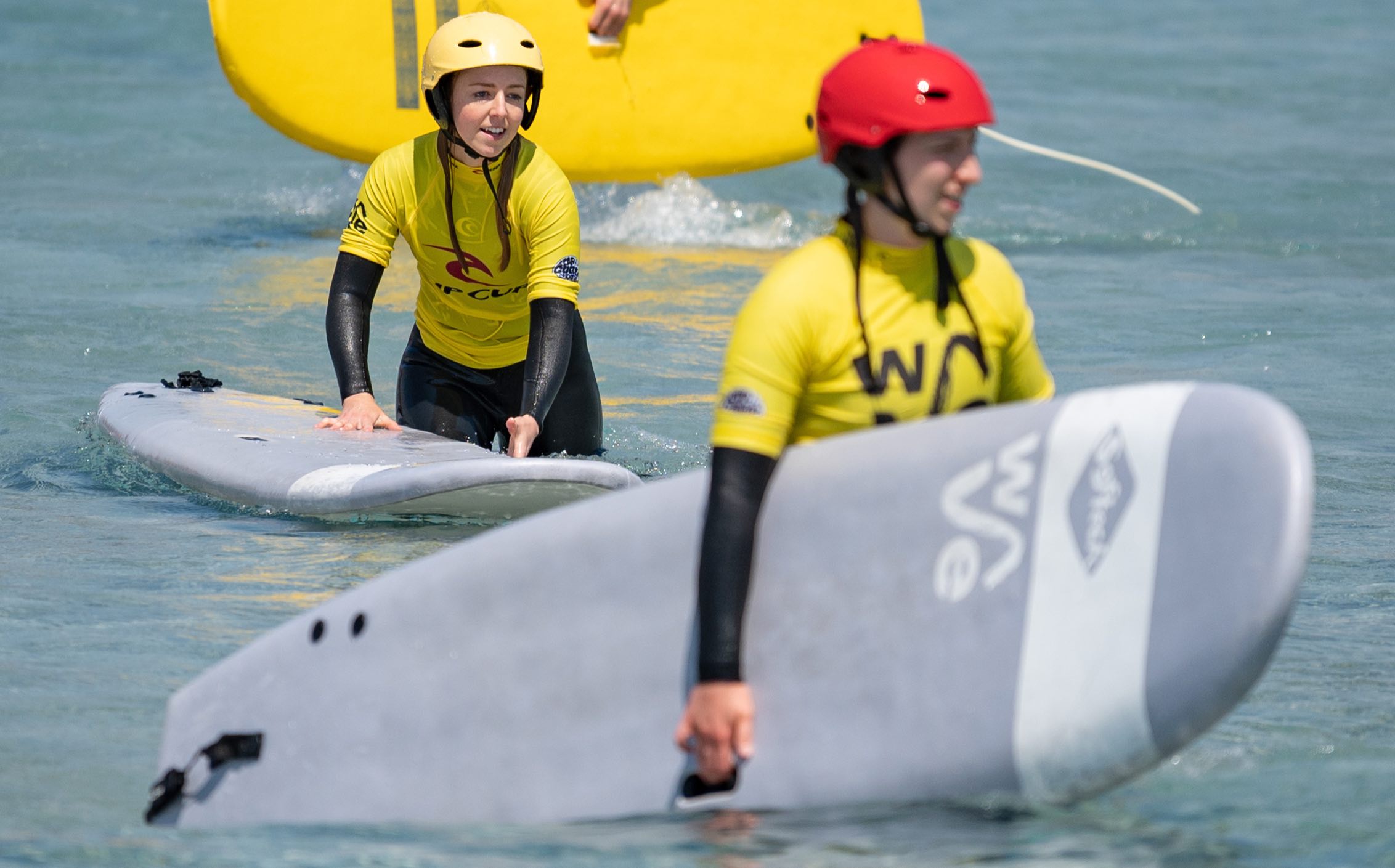 And this is only the beginning. “There are lot of exciting conversations on the go. We’re in talks with some Somali women who want to come here, as well as Wave Wahines CIC, who teach young girls how to surf and feel confident in the water. Yvette, founder of Wave Wahines CIC, is also doing sessions for Syrian refugees down in Devon. We’ve been talking about how we can repeat the same thing here, using our network of charities and partners to help bring the sea in-land and into those communities.”

It’s this network that The Wave has created that is key to making surfing accessible to as many people as possible. While The Wave themselves are organising programs supporting the areas that they feel most passionate about, they’re also bringing together charities and partners, who want to use the space for their own initiatives, with beneficiaries and donors who want to help.

And these steps are already having an impact, creating a sense of community for women at The Wave. “We have groups of cyclists and runners stopping here for a coffee and to watch the surfers; we have mothers who meet here with their children. “Surf & Skate Sundays” were set up by women skaters and surfers in Bristol; they partnered up to organise a monthly event, entirely off their own backs, where they would do a surf lesson together, then teach each other to skate around our waterside track.” (You can find them on Instagram: @wavespavesgals.) Now that these communities are starting to happen organically, we want to look at how we can better support them, helping them to spread their message or funding them to organise events.” 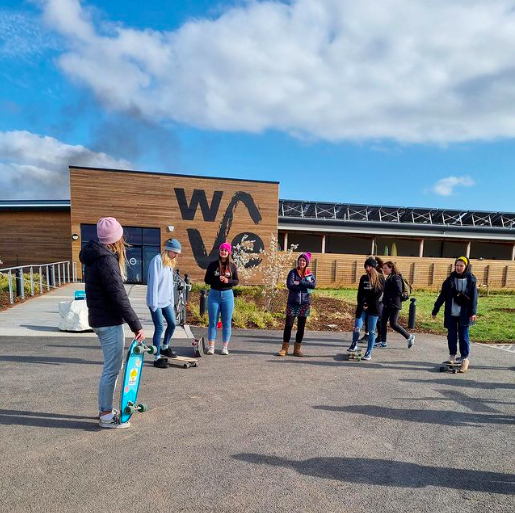 The Wave are also working to do their own research into the benefits of BlueHealth. “The thing that spans all of these different strands of social impact work is BlueHealth,” says Nick. “Everything comes back to that; the power of being in water, on water and around water. That’s central to everything we do.”

“The more people who come and spend time here, the more research opportunities we have,” Nick explains. “It means we can talk to a diverse range of people and really quantify the benefits of being in water, which again will help us to spread the message and in turn help more people. It allows us to say “not only do we believe in this, and not only do we see it day in and day out, but we can give you some actual evidence of it.”

If their social agenda wasn’t enough, The Wave have got even bigger plans for the future. “We’re just about to start on our next venture, which is a location near London. We’re looking at doing around 5 of these projects at different locations in the next 5 years – or at least, to get them started! We’ve been thrilled to see how many people are travelling to come to The Wave, but want to make it accessible to those who can’t or don’t have the resources to travel to us.” 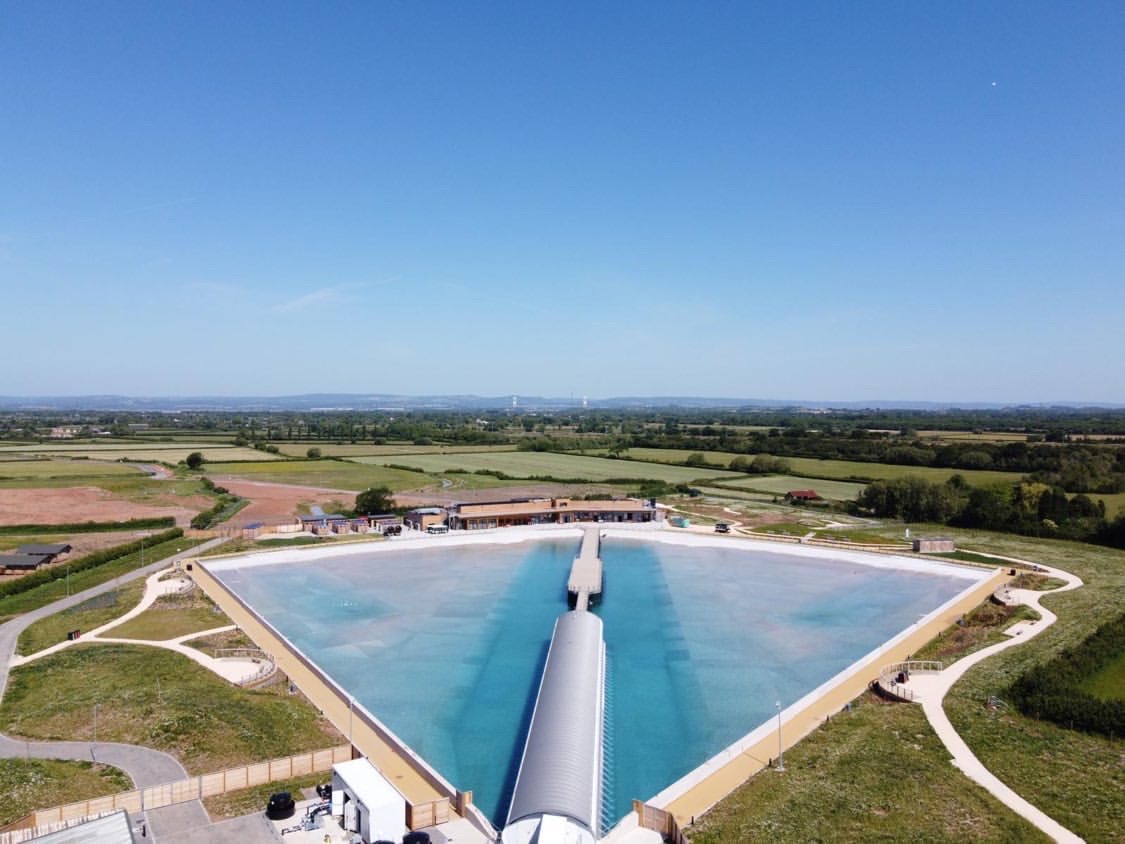