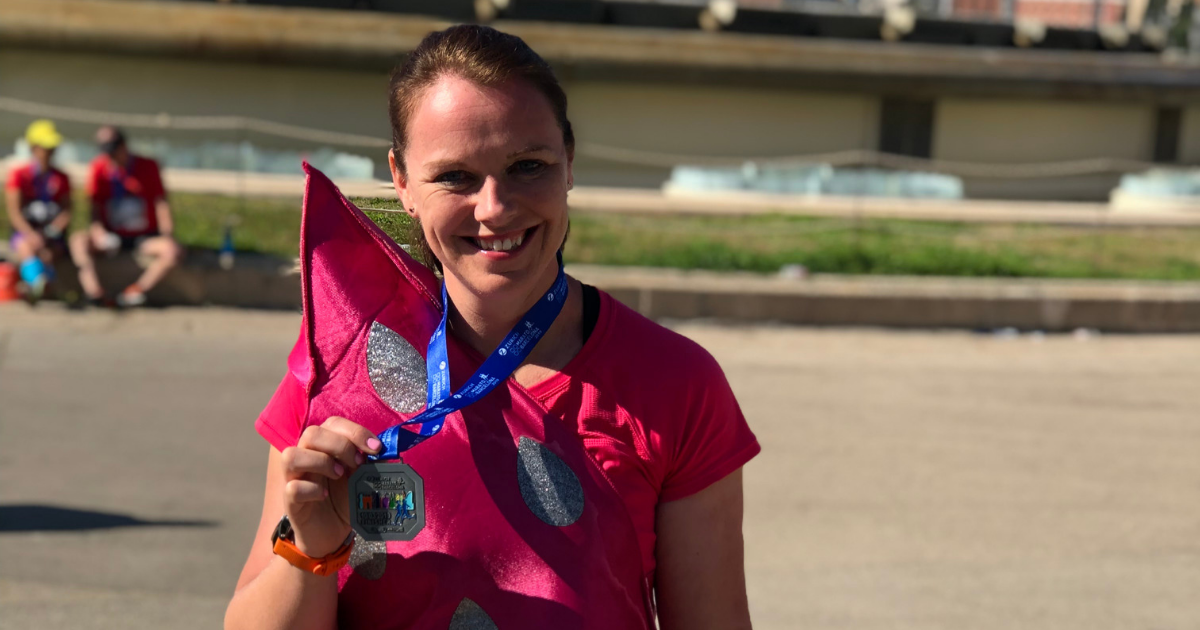 Sally Orange has been a physiotherapist in the army reserves for 21 years. She began running when she was 34, when she trained for her first London Marathon. This year, she runs her 8th London Marathon – her 45th Marathon in total.

I’d run at school, but then nothing until I ran my first marathon when I was 34.

I remember watching the very first London Marathon, and thinking that I would love to do that one day, but it seemed so out of reach. Not just the distance or the training, but having to raise that much money for charity, to ask people to give me money for charity. That was a confidence issue in its own right.

To take the pressure off when I applied to do it, I thought I would run in fancy dress. I signed up for my first London Marathon and gave myself three goals: the first was purely to finish, the second was to finish without walking, and the third was to do it in under 4 hours. I did it in 4.08, so two out of three isn’t bad!

Tell us about a recent race you’re proud of.

I did the Barcelona Marathon in March this year dressed as a watermelon! After running as Supergirl, I decided I wanted to do something different. I thought of using my name and run as an orange. And that time, I got the Guinness World Record for the fastest marathon dressed as a piece of fruit. So then it became my thing. I’ve raised money mainly for various military charities, but more recently for Heads Together. When I met him, Prince Harry asked me why I was dressed as a tomato, and I had to confess that I was actually a strawberry.

What do you remember about your first race?

I remember being sick before! But it was the London Marathon, and that first race has a special place in my heart. I ran dressed as Supergirl, and I still remember feeling like a superhero. After I’d run it, it took a couple of days to sink in. I also remember not being able to walk for a week!

What race result are you most pleased with?

I don’t go for time. I go for the time of my life. For most of my races, I couldn’t tell you the time I did it in, apart from that first one. The marathons I’ve done around the world are all so different that you couldn’t compare them: Antarctica, Mongolia, Uganda… but they’ve all been in costume. I’ve not done a marathon without a costume.

Last year I did 12 marathons in 12 months on seven continents, and in each one of them I was dressed as a piece of fruit, but I don’t know my times for any of them!

How do you train?

I don’t! I’m not part of a running group, I find that too intimidating. I don’t really train at all, so there isn’t any pressure. I run for the marathon experience, not for regular running. That said, I do like to go out for a run occasionally, anywhere between two or three miles and 13 miles. There are plenty of times I regret having not gone for a run, but I never regret having gone for a run.

My orange fruit kit! I don’t just have one: I’ve got a slice of orange, a cross section of orange, and a full orange. I have 40 odd costumes to choose from – I have an aubergine I haven’t worn yet.

Tell us about this year’s London Marathon

I find that running is very similar to living with a mental health issue, in that it involves setting goals, no matter how small. If you know you’ve got a goal ahead, you need to break it down into small steps to achieve it. And with running, because it hurts physically, your brain is thinking about that physical pain rather than what your head is thinking. Sometimes I use a run to think about an issue, while other times I use it to escape and listen to an audiobook. My head constantly tells me I’m not good enough, so I suppose that’s where running without a time helps: my brain can’t tell me I’m not good enough.

I run and chat in all my marathons, which inspires me as I discover so many stories, and I’ve been told inspires others as I grin all the way round, rather than looking as though I’m in pain. I truly believe everyone can do a marathon – it’s just that not everyone wants to!