"I want to run the marathon in the next Olympics": Charlotte Purdue's journey to her incredible London Marathon race - Women's Running

“I want to run the marathon in the next Olympics”: Charlotte Purdue’s journey to her incredible London Marathon race

Charlotte Purdue ran an incredible race at Sunday's London Marathon, achieving a personal best as the first British woman to cross the line. Rachel Ifans recently caught up with her to find out all about her journey to the marathon, and how she's coming back stronger after being overlooked for Tokyo 2020.

Charlotte Purdue has had a tough year, although you wouldn’t know it by talking to her.

After a couple of years of being dealt considerable blows – think being separated from her coach by a global pandemic, being injured in the run up to the Tokyo Olympic trials, being overlooked for Olympic qualification and having her appeal rejected – she stillscomes across as one of the most friendly and forward-looking people you could hope to meet.

Now, you may say that athletes are trained to be strong and positive mentally, and that knockbacks and resilience come with the territory, but there’s something a bit different about Charlotte. She’s determined, she’ll stand her ground, but her good humour and easy nature seem to go deeper than what you learn on the sports psychologist’s couch. It’s not that she doesn’t feel the pain of missed opportunities and the frustrations that come with being an elite athlete – be they injuries or the infuriatingly complex and sometimes nonsensical rules of qualification – it’s that she seems to hold them as lightly as possible. 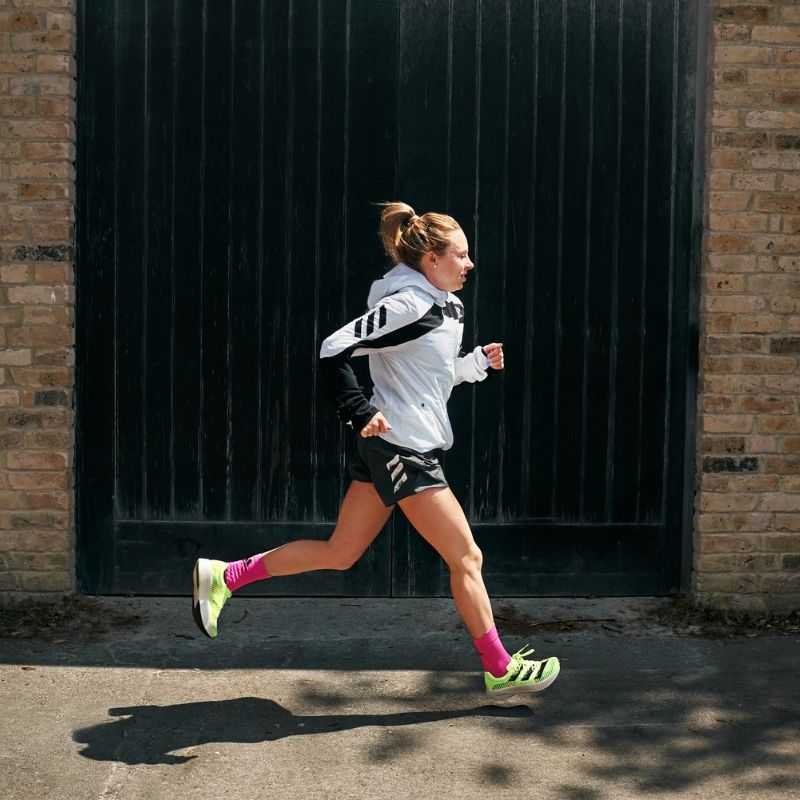 In it to win it

Charlotte is modest about her natural ability as a long-distance runner: “I’m not very good at running fast over anything less than a kilometre. In fact, I don’t think I was ever good at sprinting; I remember telling my first coach that I thought I was going to be an 800m runner and he just looked at me and laughed!”

The training and the racing was a lot to take on when she was so young, but Charlotte doesn’t seem to have been intimidated by it all. She looks back on those early successes: “I think I was 13 when I won my first national cross country and then, when I was 15, I represented Great Britain for the first time in cross country.” She explains about that event, which took place in very high temperatures in Kenya. All the senior athletes were allowed to go to heat training but, because Charlotte was still at school, she wasn’t allowed to go to the training camp that was held before the race. “Instead,” she recalls, “I trained in a heat chamber in an exercise physiology lab near home. It wasn’t the most fun I’ve ever had but it definitely helped.”

On the day, the race took place in 37-degree heat and almost all competitors had heat exhaustion at the end. “It was savage,” Charlotte remembers. But despite this, she loved the whole experience. “I remember being so excited to be there. I didn’t really know what to expect so was just taking it all in really, and everything was a bonus.”

To this day, she doesn’t really get nervous about competitions. “I feel like it’s the fun part, she beams. “I mean, training is obviously hard so it’s more just about enjoying the race on the day.” 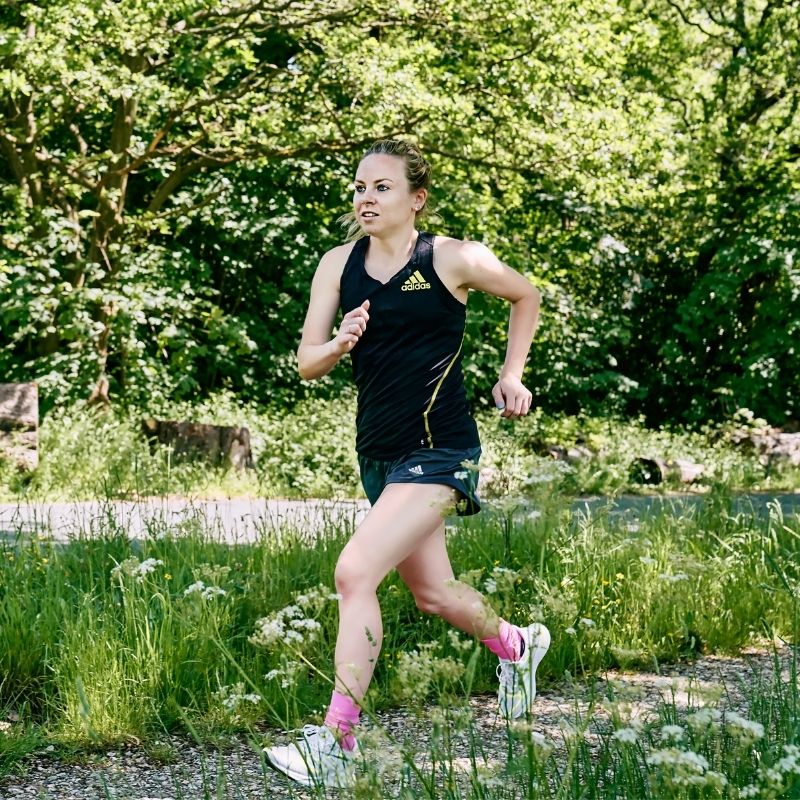 Charlotte had always wanted to move to marathons from cross country and, in 2016, after an injury-prone stretch and a change of coach, it was time to switch things up.

“At first, running marathons was a bit of a shock, because it was a lot more miles. My legs were really tired all the time from the training but now I’m way more used to it.”

Her first London Marathon was in 2016 and she placed third Brit and 16th in the race overall. However, as you quickly find out when talking to elite athletes, success is not as simple as your position on the day.

Understood. So, in 2016, for instance, to qualify for the Olympics in Rio, you had to finish in the top three at the London Marathon – which she did – and do it in under 2 hours 31 minutes.

And there’s the rub.

“The thing is, the system is a bit complicated; the two Brits who beat me already had the qualifying time in the bag so all they had to do on the day was finish in the top three.” So, in the race, those women weren’t really worried about running a specific time.

For Charlotte, it was her first marathon and she just wanted to get round and have a good experience. She explains: “We were running at a bit of an awkward pace, just off the Olympic qualifying time, but I wasn’t experienced enough to take it on.

So I just sat in the group, didn’t get the qualifying time and [the Olympic team] couldn’t take me.”

That year’s London Marathon kicked off her marathon career nonetheless and, with customary good attitude, she took the positives with her and left the regret and frustration behind. “No, I didn’t get to go to the Olympics in Rio, but I still placed well in my first marathon and it was a good time. Also,” she adds, “I think every single time I’ve trained for a marathon since that first one I’ve just got a bit better.”

Just a year later, the London Marathon 2018 went really well for Charlotte when she finished 13th overall, first European, and first Brit. “That was a really good day!” she smiles brightly. And, of course, the performance meant she also qualified for the IAAF World Championships in London later that year which saw her cross the line as first British female. 2019’s London Marathon turned out to be a career highlight too when she ran a PB of 2:25:38, finishing 10th woman, and third fastest ever British woman. 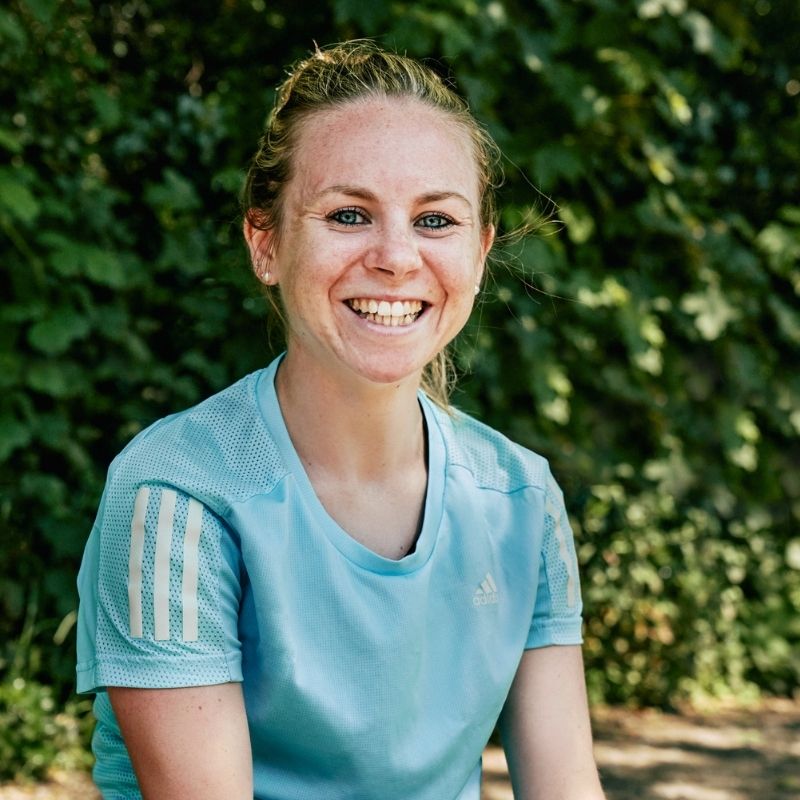 You have to take the rough with the smooth as a sportsperson and those years certainly had their ups and downs. 2018 saw her forced to pull out of the European Champs due to cramp in her hamstring, for instance: “I was only about five miles into the race but I literally couldn’t run it was so sore. It was really annoying as I was favourite to get a medal and my training had been going well.”

And a year later, in 2019, at the World Champs in Doha, Qatar, heat got the better of her and she had to retire halfway through the marathon. She explains how it was a real low to have to abandon a race when she was representing GB: “It was 37 degrees. We did do some heat training in Dubai two weeks before, but it was still so hard to run, I just felt terrible… really drained and I knew there was no way I could finish the race.”

And then, of course, 2020 rolled in and Covid took the world by storm, meaning that Charlotte has now been separated from her Australian coach, Nic Bideau for way over a year. In normal times, she spends the UK winter months in Australia with him, and he comes here during our summertime and they stay in touch virtually in between times. It’s meant she’s had to get used to training independently much more, and it’s been tough to face the Olympic obstacles she’s done this year without him physically by her side. 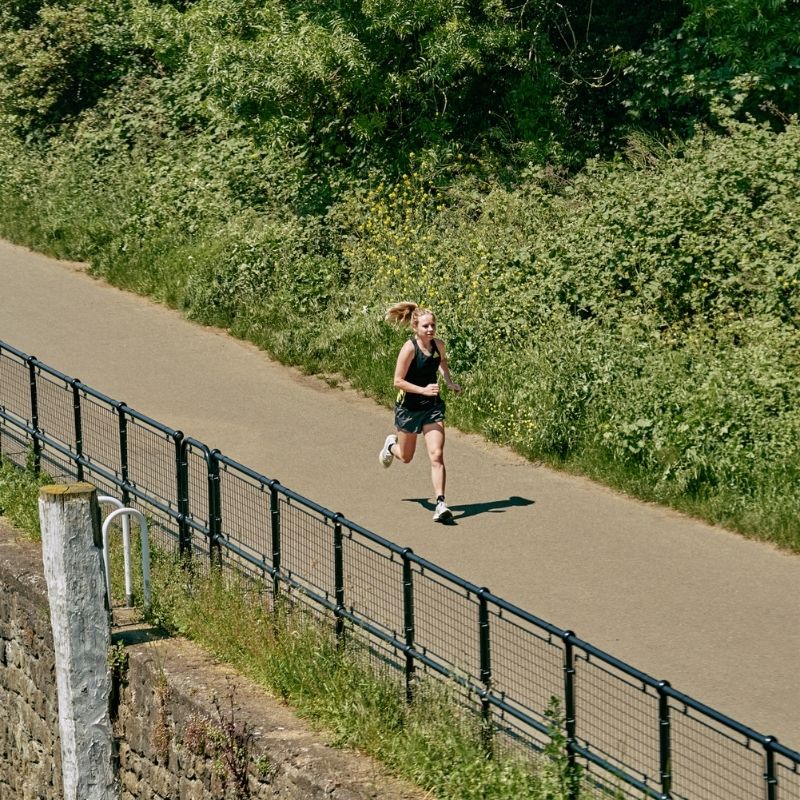 Charlotte has definitely had more than her fair share of injuries over the decades but she tries to be philosophical about them. “Once you get one injury, it’s like you’re susceptible to more injuries. Every time I get one injury, I then usually get three in a row, which seems never ending, until I break the cycle again.”

Some have wondered if the rigorous training she did as a youngster has played a part in injury patterns later. She thinks about this: “I trained hard as a junior.

When I look back, I see that I was doing a lot when I was pretty young, but” she qualifies quickly, “I got really good results and I think I wouldn’t have done that if I hadn’t trained as hard as I did. If I’d have taken a more conservative approach as a junior, I might not have been as good, and I’d rather have the good results.”

Having said that, the injury she picked up at a training camp in January was the start of a run of bad luck this year. It meant she had to miss the trials for the Tokyo Olympics, which were held in March, for a start. “Because of missing the trials, I knew my chances of selection were a lot less. However, at the trials, only one of the women ran the required qualifying time so obviously she was automatically selected… but suddenly that meant there were two spots left.” The field was open, or so you’d think…

Charlotte explains: “The two women they ended up putting into the Olympics hadn’t been able run the trials either. One of them was faster than me for sure, but I thought I stood a good chance of getting the third spot.” But it wasn’t to be.

Unfortunately, the selection team decided to give the other injured competitor a spot in the Olympics ahead of Charlotte which was really disappointing. When it comes down to it, she says, she had run a whole minute faster than the woman who was ultimately picked, and neither of them attended the trials. It seemed very unfair, but the committee justified their decision by saying that Charlotte was a higher injury risk. “For me, I didn’t understand how you could you say someone was more injury prone than another when we’ve all been injured in our careers. Having run four minutes under the qualifying time, I felt like I was in a good position to make the team and then to be told that I was too high a risk of injury was gutting.” 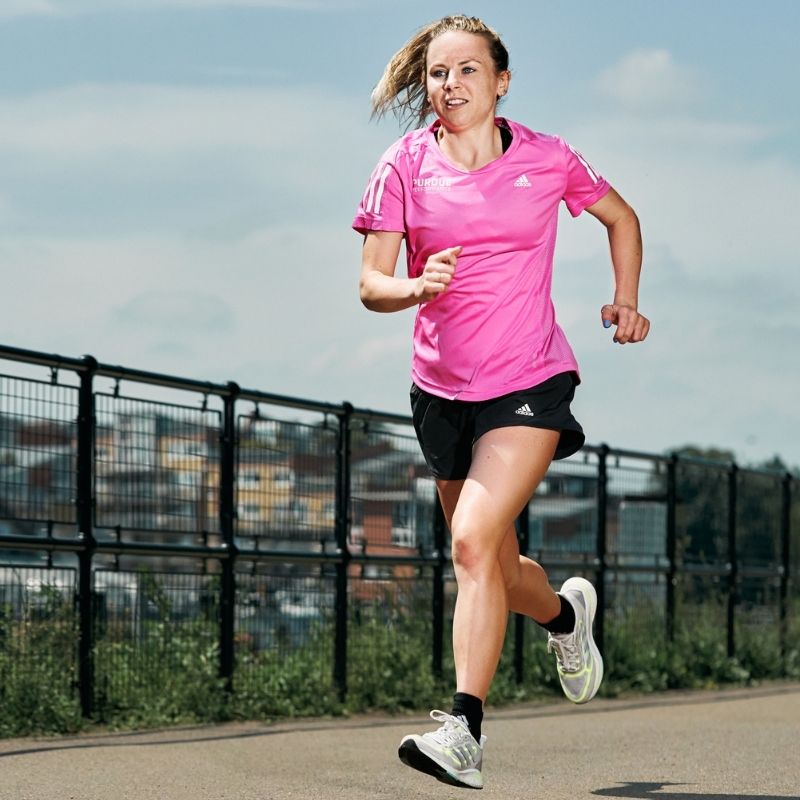 Charlotte didn’t take the decision lying down. She had 24 hours to appeal against the decision and, although she knew that they’d already announced the team so it was very unlikely that they would overturn the decision, she still stood up for what she felt was right. That same day, when her head must have been spinning with disappointment and injustice, she had the poise to make a stand.

Nothing changed because of her appeal, but that’s by the by. What matters is that she stood her sacred ground, something that more and more female athletes are finding the strength to do these days. The more of us who do it, the more change will happen, whether it’s women being able to take their children to the Olympics with them, women talking openly and loudly about how unsafe they feel while running, or women campaigning to be allowed to run the same distances as men in ultra events.

Refusing to be overlooked in whichever way we can is the key to change.

The Tokyo Olympics are over now and this icon of the London Marathon is looking ahead. “My long-term goal is to run the marathon in the next Olympics, but before that there are other championships like the Europeans, the World Champs and the Commonwealth Games to come, so I’ll be trying to qualify for those and run faster times.” 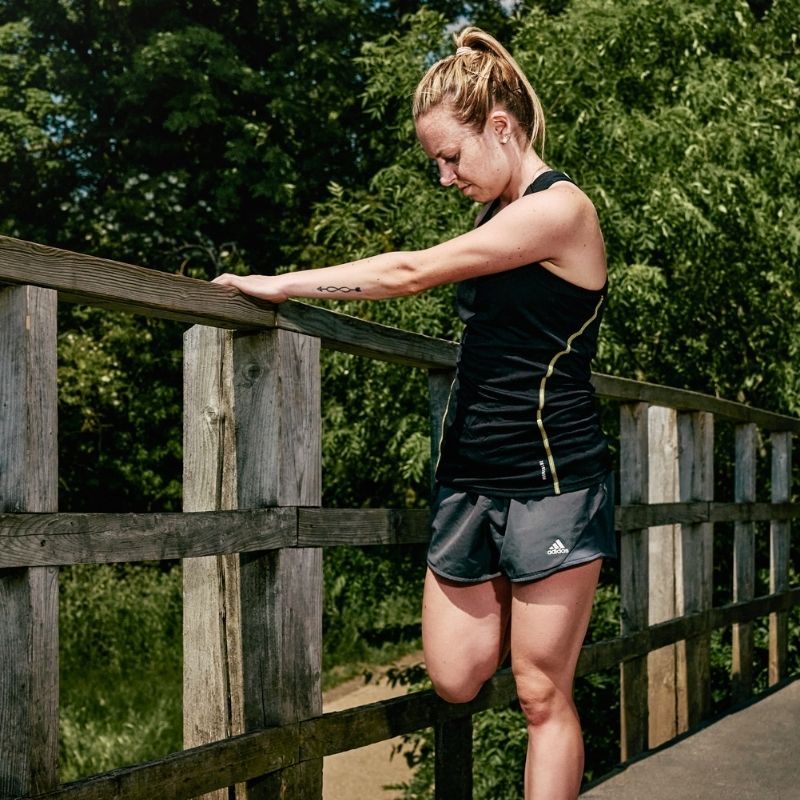 The key bits of kit Charlotte can’t do without