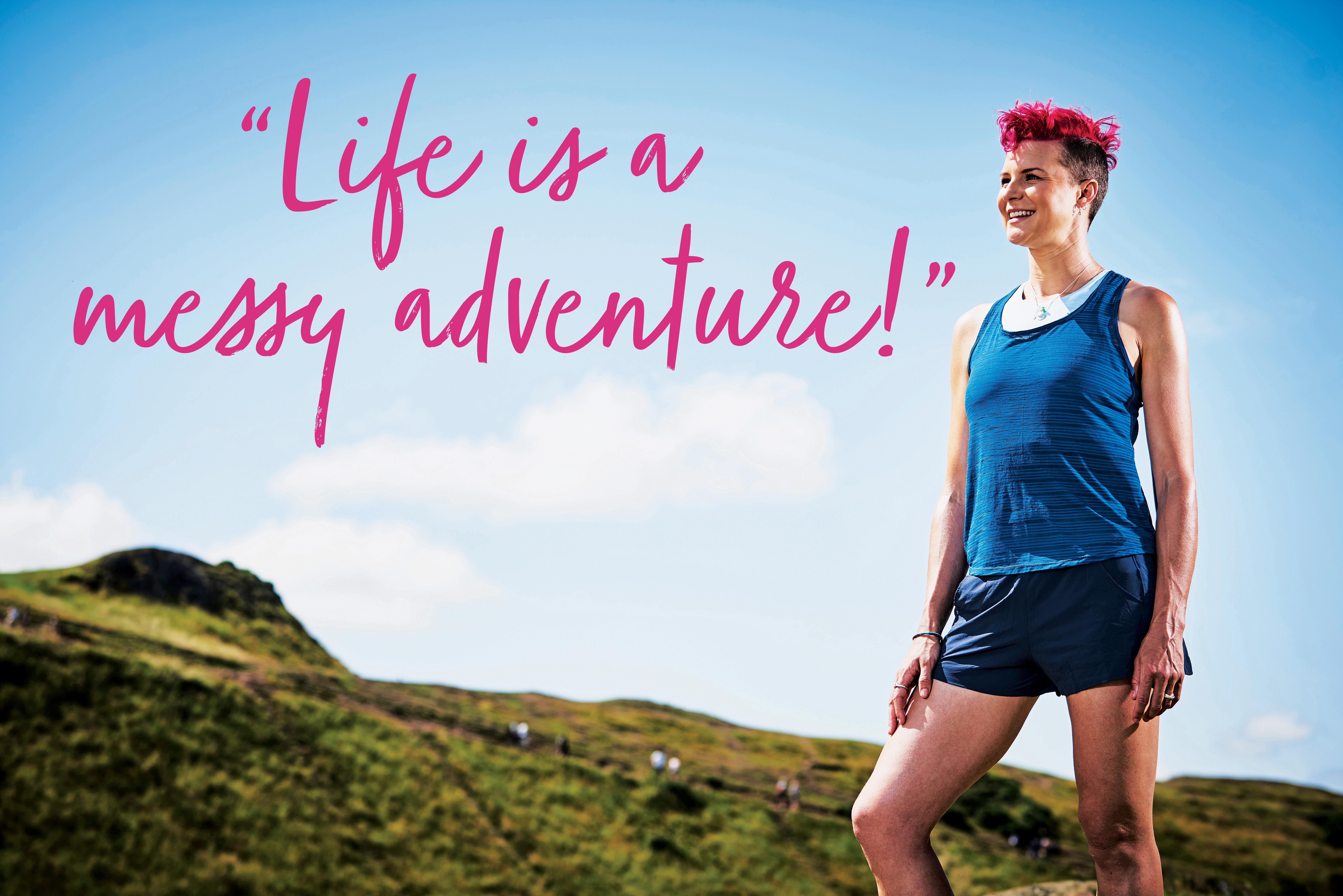 We talk to Anna McNuff about her running adventures, from a 1,911-mile New Zealand run to exploring Britain barefoot

“Winning running races isn’t for me – I like to run, stop, look at things and talk to people. It’s about the coffee and cake too, of course. For me, it’s more like I’ve chosen an experience and I just happen to be running because I love it.”

We like Anna McNuff already. She’s an “adventurer, speaker and mischief maker” says her website. The 34-year-old from Surrey tells me about the match that lit the touchpaper: “My friend and I dressed up as Roman soldiers and ran the length of Hadrian’s Wall together.

“I knew I liked going out for a day’s run. But I suddenly started to wonder what would happen if I took my stuff and stayed overnight, using it as a way to explore places. At that time I hadn’t explored the UK much, but my friend was a history teacher and I started to get more interested in learning about Hadrian’s Wall.”

Next, Anna donned a dinosaur onesie and ran the Jurassic Coast with another friend. “I’d found my niche. I didn’t want to be worried about my times, always keeping an eye on my splits or clock watching. For me, it was – and is – about joy and running.”

That had always been the case for Anna. “One of my earliest memories is of the school cross country – you know the type, where most kids sprint for the first 20 metres and then walk the rest of the way? My first race, when I was six years old, was a loop around a hospital in Epsom, and I ran myself to a standstill because I was so excited. I couldn’t make it to the end of the last lap and my dad had to pick me – I was in tears because I couldn’t finish.” 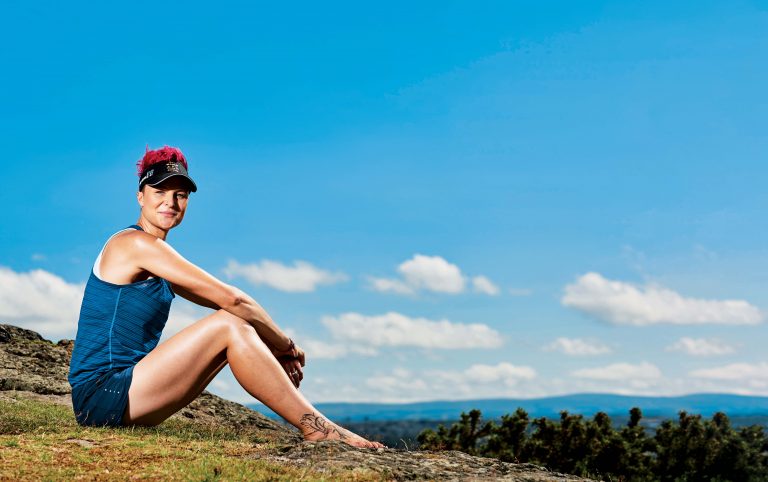 Keep on keeping on

She wasn’t the best, she says. She never won. But she loved it and relished getting muddy too. Anna took up many sports including football, rowing and cycling, but it took until her late twenties for her to really reconnect with running. “I used to commute to work and back. My colleagues thought I was mad but honestly, why would I have sat on a tube for an hour when I could put everything in my rucksack and run instead?”

Running became a necessity in Anna’s life but it wasn’t about speed. “Sometime in my twenties I realised that I don’t have those fast-twitch fibres; I can’t run really quickly but I can just keep on going. It’s a headspace thing for me, an escape, a place where you process things, and I just feel so much better when I’ve gone for a run.”

So, Anna played to her strengths and desires and started devising long, multi-day running journeys. It must have worked, because her love affair with running continues a decade on. And when I say long, I mean long. Her current challenge is to run up and over, through and across Great Britain; having started in the Shetland Islands in June 2019, she’ll finish in London, hopefully on 10 November (via big sidesteps to the Isle of Man, the South West and the Channel Islands). Oh, and she’s doing it all… no, hang on, I’ll leave that gem for later. 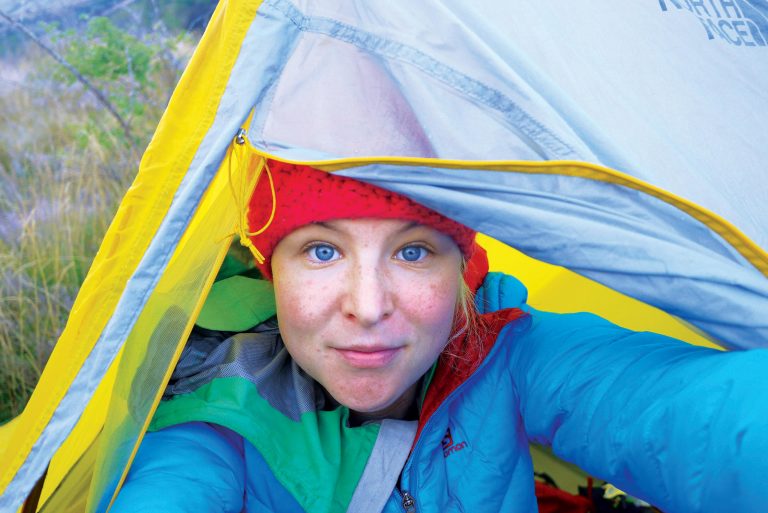 So, she knew she liked pushing herself and self-supported longer distance runs. Then she found the Te Araroa Trail in New Zealand. “I honestly started it having no idea whether I could do it. I’m not a traditional runner with an athletics background, but I wanted to see New Zealand on foot and by myself.”

Anna only had a six-month visa for her New Zealand adventure and was giving talks in schools along the way. “The journey took six months and pushed me right to the edge of what I was capable of. As I was doing it, I had so many negative voices in my head. I couldn’t stop telling myself I wasn’t fast enough and it really brought home to me how I spoke to myself when I did things.”

Before she went to New Zealand she’d written the majority of a book on a cycling adventure. But she learnt so much about herself on the mammoth Te Araroa run that she wanted to share that with everyone instead. “I learnt I could do long distance runs if I did them my own way. It was a coming-of- age journey and at the end of it I was so proud of myself and such good friends with myself simply because I’d pushed myself beyond my limits and I had nothing left to prove.

“When I made it to the Cape Reinga lighthouse at the end of the adventure I stood watching the Tasman Sea and Pacific Ocean collide, which is a phenomenal sight in itself. I felt a contentment I’d never felt before. ‘Well done, me’, I thought – and it really was just me who’d done it!” 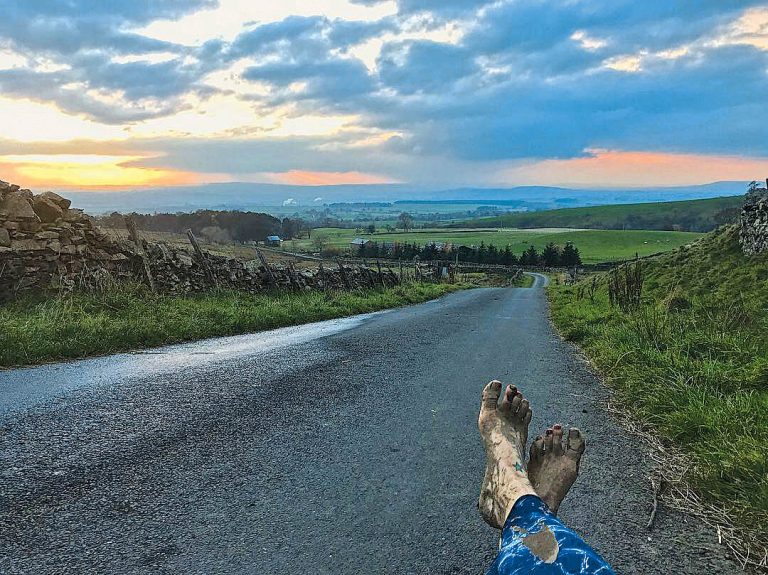 Wind forward to 2019 and Anna is in the midst of another huge challenge. Having been made an ambassador for Girlguiding, she wanted to get to know her own country more, to really see Britain. She also wanted to use her new role to get out and talk to Girlguiding units as she went along.

Her message to the Guides is simple: “You’ve got to take on things you feel are just beyond your reach, where you have moments when you think, ‘What on earth am I doing? I just want to go back home and be comfortable again.’ But it’s when you feel that and you keep going that the nerves subside and you get a confidence that carries you through the rest of your life.”

If she was saying that to the girls, she figured she also needed to find something to push herself that bit further. And no, before you ask, running the distance of 100 marathons over the course of six months is not a challenge enough. She needed an idea that terrified her.

“When I was thinking about how to challenge myself, I thought, ‘I’ve done long runs in trainers before – why not do it in bare feet?’” Anna had been running in Vivobarefoot minimal trainers for three years anyway, so she was used to the concept – but she still needed to train her feet. “I spent 18 months transitioning down to nothing – using the Vivobarefoots and then Skinners, which are socks with rubber bottoms. 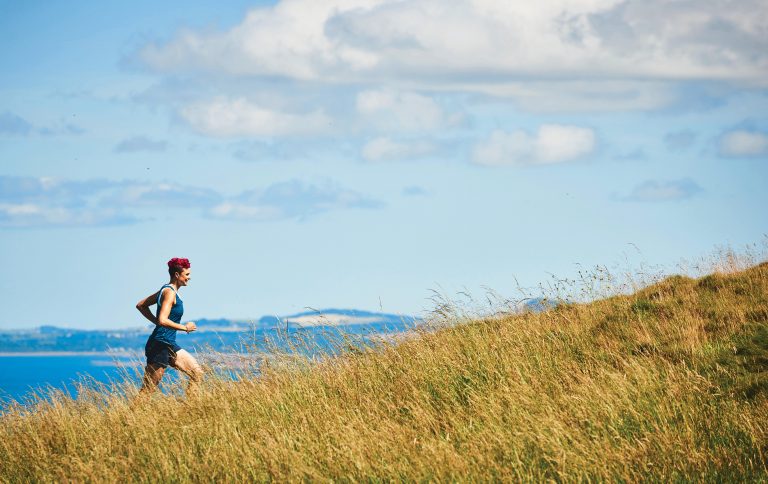 “When you first run barefoot, it’s agony. You hit the tiniest thing and you feel it. In fact, you feel absolutely everything. Then, as you get more and more used to it, you start to love feeling everything and begin landing more so softly naturally.”

Anna explains that firstly your muscles start to get used to it: your calves and thighs work harder, your Achilles starts to lengthen. Secondly, your skin starts to change; it thickens into a soft pad, a bit like a cat’s paw. Thirdly, your brain adjusts; to start with, you run staring at the ground but very soon your brain starts to understand in a split second what is and isn’t a good thing to run on.

Anna was 700 miles into the Barefoot Britain challenge when we spoke. I catch her on a couple of rest days in Edinburgh and she’s feeling good.

“The first month was an emotional rollercoaster. It was just so hard. Even though I trained for it, I couldn’t run that distance every day and as a result, the first fortnight felt like being hit by a freight train. My body wasn’t conditioned and I honestly wondered if I’d gone too far.

“I knew I wouldn’t give up, but it was just so hard and I was so miserable and I knew I couldn’t cope with that for five months. Gradually though, I started having good days. And now I can see the ups and downs of the last month and I think it’s going to be all right.” 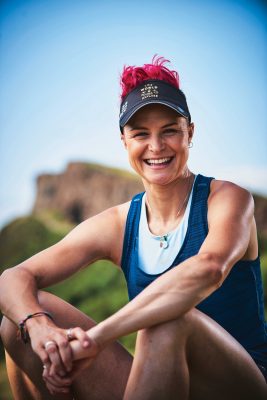 Anna’s route around Britain was determined by the fact she is doing three talks per week, dotting the map of the British Isles with Girlguiding huts here, there and everywhere.

What is she finding most challenging about this endurance feat, apart from the feet, I ask? “Ooof, well, the barefoot thing is one thing. However, a bigger challenge for me is asking for help and I’m prodding at that personal boundary on this adventure.”

As of 18 November 2019 Anna has completed her challenge!