Can supplements help you run faster?

With so many supplements available, it can be hard to know which, if any, can offer our running performance a boost. Laura Hilton finds out...

The supplement industry is big business; in fact, this year the vitamin and supplements market is thought to be worth over £400 million. Many manufacturers offer some quite impressive claims, promising instant improved performance or speed. But those claims are sometimes too good to be true. So, which supplements should runners consider?

Vitamin D, along with Omega 3, is the supplement nutritionists advise most people to take, whether they’re runners or not. Omega 3 improves immunity, bone health, reduces depressive symptoms and potentially improves strength and fat loss. Our bodies naturally absorb Vitamin D via the skin from the sun, but in colder months when we’re inside a lot and covered up when we’re outside, we struggle to absorb our Recommended Daily Intake (RDI). Vitamin D is present in some foods but in order to achieve that RDI we’d have to eat some pretty serious volumes of those sources. You’d need to drink 6,250ml of whole milk a day or eat 143 large eggs a day to get the right amount, which is obviously (hopefully!) impossible.

In a similar way to Vitamin D, Omega 3 is a bit of a wonder substance. Omega 3 often comes in the form of fish oil, although vegetarian alternatives are also available. It has cardiovascular benefits, reduces inflammation and may increase strength and improve fat loss. We can get more Omega 3 than we need by eating at least two portions of oily fish per week, but if you’re not regularly doing that, taking a supplement may well be a good idea.

Caffeine is a stimulant found in tea, coffee and chocolate. Scientific evidence says it offers runners a reduction in reaction time, an improvement in endurance (the ability to run at a steady pace for a long time), and an ability to stimulate the body so that it needs to draw less from its energy reserves. If you want to use caffeine to enhance your running, it’s better to do it by using a caffeine supplement such as a tablet or powder, rather than by just knocking back an espresso or two. The reason for this is that it’s far easier to control the dosages using powders and tablets than by opting for the drink.

Caffeine supplementation is best avoided by those who suffer with runners’ trots (gastric distress), as caffeine stimulates the gut and may result in a sudden need to dash for the loo; not ideal midrun. If this is a problem for you, there may be a supplement that could help…

Probiotics are micro-organisms found in fermented food and are thought of as good bacteria that keep the gut balanced and functioning well. There is evidence to suggest that regularly consuming probiotics can help reduce occurrences of runners’ trots, but the most benefit is seen when these probiotics are ingested in foods such as sauerkraut, kefir, kimchi or kombucha.

If you are after a speedy recovery between training sessions then it may well be worth considering taking an antioxidant. The form that this most commonly comes in for athletes is tart cherry juice, which is normally available in a pouch or as a concentrate you add to water. Some research has shown it reduces the body’s adaptation to training, (in other words your body doesn’t gain as much from a training session as it could have done) so some people advise not having it for at least four or five days before an important training session.

There is a substantial body of evidence on creatine monohydrate and it has been found to increase runners’ endurance and to increase the body’s storage of glycogen, which is the form in which our bodies store energy. Taking creatine monohydrate does cause our bodies to also hold on to water (fluid retention). This means that, for the period of time when someone’s taking it, their bodyweight may increase due to the extra fluid being held by the body. It’s worth noting this, as any extra weight a runner has to carry during a run has the potential to negatively affect their performance.

Nitrates are most commonly found in beetroot, as well as green leafy vegetables such as rocket, spinach and lettuce.Nitrates have been found to reduce the oxygen ‘cost’ of exercise which leads to an improved aerobic performance. By regularly eating nitrate-rich foods, you can enjoy the benefits nitrates offer, but if you don’t eat these foods often or at all, you might consider getting the benefits by supplementing your diet with beetroot juice. 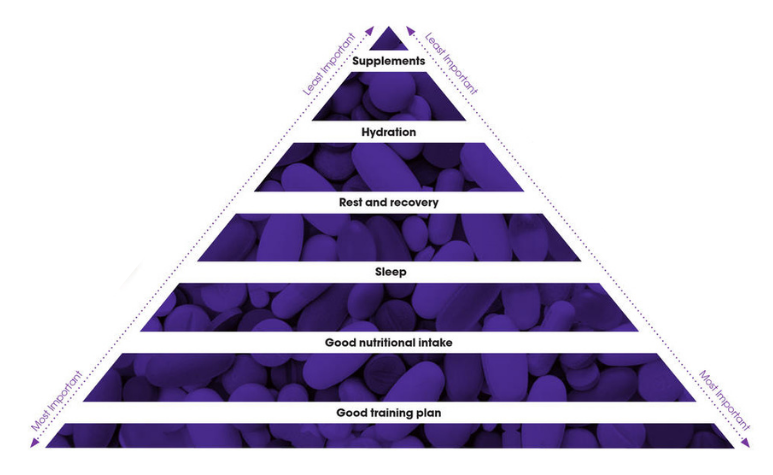 While all these supplements may be useful, it’s worth noting that supplementation should be lower down a runner’s priority list than other factors, such as getting proper sleep and eating well.

A runner needs to make sure they have a good training plan in place and that they stick to it. They then need to ensure they eat a varied, balanced diet rich in nutrients. After that, ensuring they have a good sleep routine is important, and then they should make sure that they drink enough fluids. It’s only once all of those things are on point, that a runner should even think about supplementation, as GP Carol Eddie confirms, “They should only do this once they have a great training plan, diet and sleep/recovery routine in place.”