Running and periods: the science you need to know

According to UNICEF, every month, 1.8 billion people across the world menstruate. Although having a regular period is a sign of good health, some people dread their monthly bleed and know they’ll be unable to run. For others it’s a mild inconvenience and they can carry on as normal.

Through history and across cultures, the attitude to periods varies: women have long been considered weaker when they’re menstruating. That leads to the assumption that you either shouldn’t or can’t run during a period. But many have proven otherwise.

Let’s investigate the science and overcome some of the barriers that crop up when running during your period.

Running and periods: what does the science say?

It’s easy to assume the changing hormone levels across your menstrual cycle will have a profound effect on your exercise. A meta-analysis, which combines all relevant studies, was published in 2020 and found that currently, it’s not possible to make general guidelines about what types and intensities of exercise best suit the menstrual cycle phases. Some individual studies show that performance can actually be enhanced during a period but this review found there might be a trivial reduction.

The conclusion is that we’re all different and need to take an individual approach. This means tracking our cycle, feelings and performance and spotting patterns. We can then work with our body rather than against it.

A period is theoretically classed as heavy if you lose over 80mls, that’s about four and a half tablespoons. In reality, a period is heavy if it’s difficult for you to manage, regardless of blood loss. Heavy periods (menorrhagia) make running difficult. There’s a risk of bleeding through your clothes, particularly on long runs or in races and blood loss can make you feel lethargic or light headed. Heavy periods also put you at risk of anaemia where low numbers of red blood cells which transport oxygen around the body, make exercise hard. Symptoms of anaemia include feeling short of breath, faint and a faster heart rate. Performance will be reduced and if you think you might be anaemic, don’t run and see your GP.

Pain rather than bleeding is often the run stopper. Either a continuous dull throb or ache or more random, sharper pains that come and go. The pain can be incapacitating. The muscular wall of the uterus contracts and cramps to shed its lining. Interestingly, these pains tend to reduce after childbirth. To some extent, period pains are ‘normal’ but there can be underlying causes such as endometriosis or fibroids. There’s actually little evidence to show that exercise will reduce period pain but many women find it does, even if it just works by distracting you. 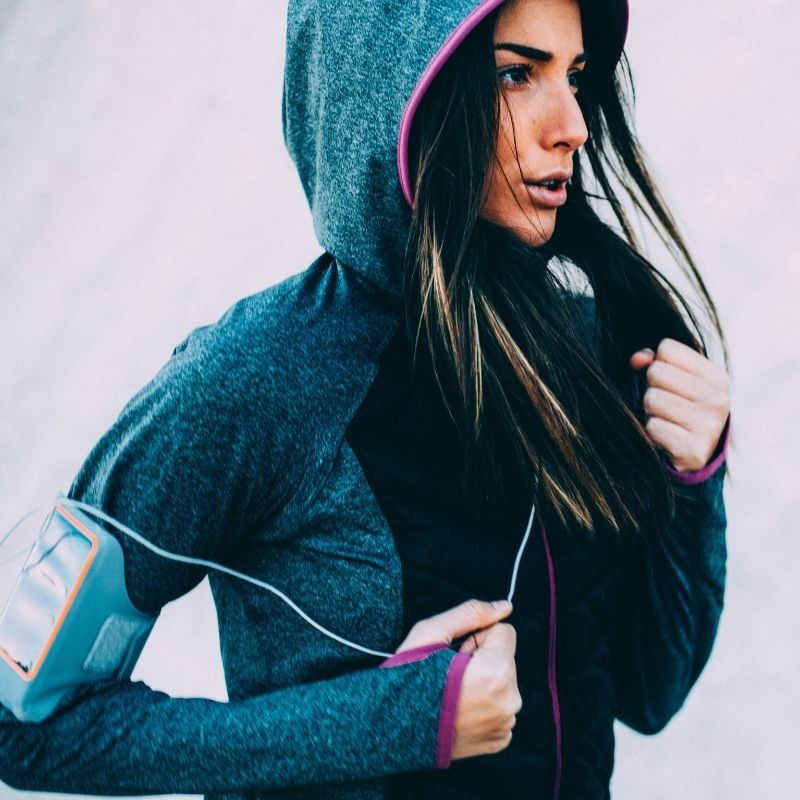 Coping with a period while you’re exercising can be tricky. Worries include, leaking through clothes, bulky pads being visible through tight Lycra and the sheer inconvenience of carrying sanitary products around with you.

If your period is due on race day, it can be a disaster if your periods are heavy or painful. Consider using a progesterone tablet, the most common is norethisterone, taken three times a day to delay a period, starting a couple of days before you’re due on. It usually works but there’s no guarantee and it might give you side effects which are worse than your period itself. You might feel bloated, sluggish and underperform. If you’re going for a PB or you’re an elite athlete this might not be the best option. The only other way to avoid a period is to look at longer term hormonal contraceptives that stop your periods altogether or allow you to manipulate your cycle. These aren’t suitable if you’re wanting to get pregnant.