Do women have different hydration requirements to men? | Women's Running

Do women have different hydration requirements to men?

When it comes to hydration, we need to make sure that we’re not just following one set of rules

Exercise physiologist and nutrition scientist, Dr Stacy Sims, published a well-received book – Roar – that looks specifically at females in sport. Its main purpose was to debunk the perception that women are just ‘small men’ and provide a rationale for why we shouldn’t be training, fuelling and hydrating ourselves in the same way as our male counterparts.

Stacy suggests females should approach hydration differently to men based on differences in our sodium and fluid balance. Those differences are attributed to the menstrual cycle and the fluctuating hormones which regulate it.

Clearly, there are physiological differences between males and females, but to what extent should these impact how we hydrate?

Let’s start with a bit of science and the menstrual cycle – it prepares the female body for pregnancy each month and, on average, lasts 28 days, although it can range between 21 and 35 days (and doesn’t always run like clockwork).

The cycle begins when bleeding starts and is split into two 14-day phases; the follicular phase (days 1-14) and the luteal phase (days 15-28).

Estrogen and progesterone are the two main female sex hormones involved in regulating the cycle. The effects of reproductive hormones upon our physiological systems, and hydration in particular, is not clear-cut though.

It’s made complex by estrogen and progesterone having opposing effects on water and sodium regulation, and the ever rising and falling levels of the two hormones.

Estrogen is the main regulator of the menstrual cycle and reproduction.

At day 5-6 of the cycle, the ovaries gradually start ramping up their estrogen production until around day 12 when the release of an egg causes levels to dip. When the egg is fertilised, levels then slowly rise again in the luteal phase. In the more common instance that an egg isn’t fertilised, levels return to baseline and the cycle begins all over again. 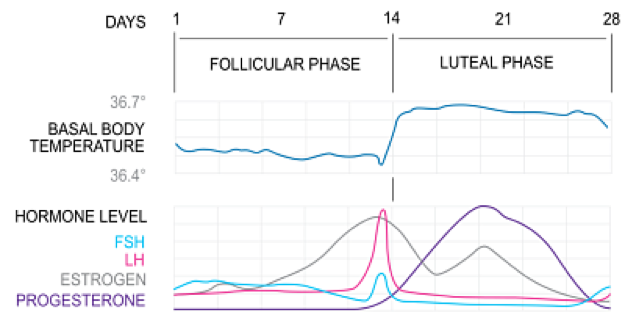 High levels of estrogen have many other effects within the body; one of which is the upregulation of the antidiuretic hormone (ADH – also known as vasopressin), which is the hormone responsible for retaining water and the constriction of the blood vessels.

By increasing ADH expression and reducing the amount of fluid the body excretes via the kidneys, elevated levels of estrogen in the follicular and luteal phase have been suggested to alter plasma osmolality and blood plasma volume…

So, estrogen is likely to have a water-retaining effect upon the body.

Blood sodium content is the other determinant of plasma osmolality though and, as mentioned before, high levels of progesterone (which also occur in the luteal phase) has the opposite effect of estrogen on water and sodium balance…

Progesterone is the hormone released by the ovaries in the second half of the menstrual cycle (luteal phase) and is again important in the body’s preparation for pregnancy.

Progesterone influences the body’s sodium balance by acting as a competitive inhibitor (i.e. it’s an Offensive Lineman in NFL terms as it attempts to block) of the antimineralocorticoid receptor to the hormone aldosterone, whose job is to retain sodium in the kidneys.

A rise in plasma progesterone concentration will inhibit (aldosterone-dependent) sodium reabsorption due to it competing with aldosterone for the receptor. This results in an increase in urinary sodium excretion.

Sims rightly reports days of high progesterone will increase our sodium loss, but research suggests that this only tells half of the story.

Evidence indicates that this ‘peeing out of sodium effect’ only lasts for a short time and is quickly offset in the body by progesterone causing greater aldosterone secretion (either by stimulating the renin-angiotensin system – which is responsible for coordinating aldosterone release – or by acting directly on the adrenal glands, where aldosterone is secreted from, to increase levels).

Remember that aldosterone retains the body’s sodium in the kidneys. More aldosterone being released and binding at the receptors in the kidneys lessens the ‘blocking’ effect of progesterone at the binding sites, meaning more sodium is retained in the body.

In addition, some evidence suggests progesterone also inhibits ANP (atrial natriuretic peptide), the hormone which is normally responsible for coordinating the body’s excretion of sodium.

Basically, progesterone isn’t trying to be the bad guy here! 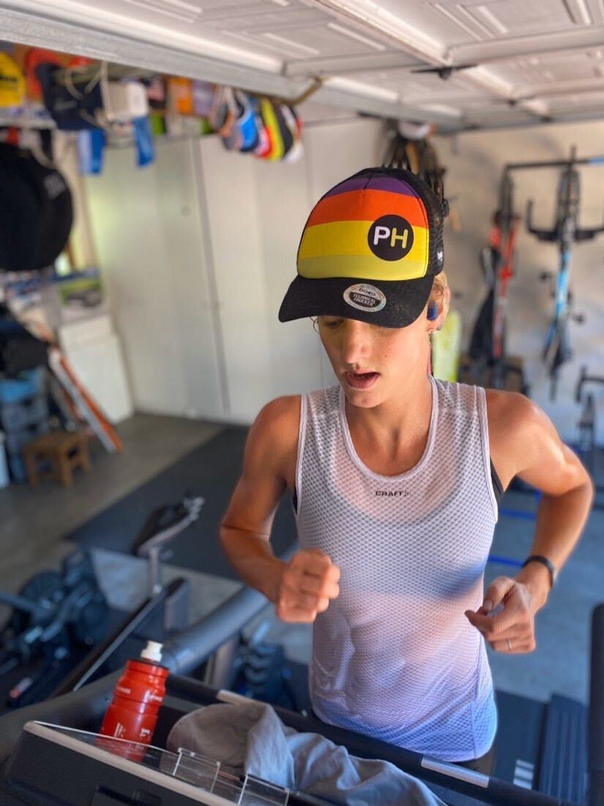 The menstrual cycle and hydration

Sims is correct that an increased shedding of sodium would be problematic to women’s athletic performance because of the direct relationship between blood sodium level and blood plasma volume.

Low total-body sodium leads to a reduction in blood plasma volume (see our blog on sodium/fluid balance) which in turn leads to low cardiovascular pressures and an elevated heart rate to compensate for this during exercise.

A reduced plasma volume also effects the thermoregulatory system. So, less fluid on board means less is available for sweating (i.e. cooling) and this results in a greater core body temperature shift during exercise.

Sims’ advice to compensate for this supposed loss of sodium and subsequent shift in core body temperature + total body water content is to consume a high-sodium hydration product before exercise to pull fluid back into your bloodstream.

This ‘preloading’ technique is arguably something which most athletes, regardless of sex, can reap the benefits of before a long, hot and/or sweaty bout of exercise or competition.

A study published in 2016 showed that 31% of more than 400 male and female amateur athletes were starting exercise dehydrated. (See Precision Hydration’s blog on preloading for more about using a strong sodium-based hydration product before exercise).

What is neglected by Sims in her discussion of this topic and what will undoubtedly skew the data, is the crucial factor of sodium ingestion. 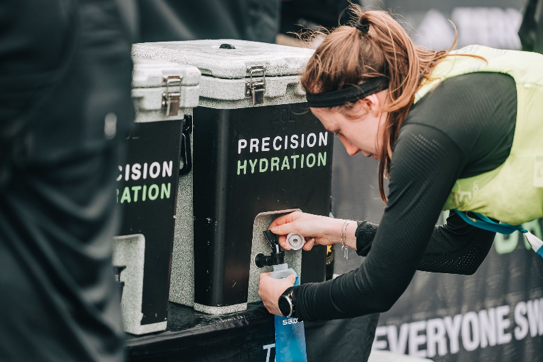 Our dietary intake causes daily fluctuations in the secretion of the sodium and fluid-regulating hormones, which adds to the difficulties of trying to reveal the true effect of the menstrual cycle. With that in mind, the role of dietary sodium ingestion and the menstrual cycle requires further investigation.

In young and healthy women, estrogen and progesterone do not induce excess fluid or sodium retention or loss. Instead, they appear to alter the homeostatic set point (i.e. the range of values that help maintain balance) around these systems which may spark an earlier response from the other sodium/fluid regulating hormones.

It’s worth mentioning that some women experience bloating in the 1-2 weeks before their cycle begins. The combined effect of elevated estrogen and progesterone levels in the luteal phase, increased ADH and aldosterone release, and subsequent water and sodium retention should be considered one plausible explanation for the bloating in these ladies.

It’s also likely that other factors have an effect on bloating at this time too. For example, reduced training load due to cramps, indulging in cravings and an increased likelihood of overeating (we all wish we could say we don’t know anything about that…), while reaching for sugary, processed foods which contain more salt is common too.

Ultimately, the overall effect of the menstrual cycle on sodium and fluid balance appears minimal, especially in the low-hormone follicular phase.

The later luteal phase, where estrogen and progesterone increase concurrently, may be slightly more impactful upon changes to our fluid and sodium balance, but the female body is very clever at finding ways and activating mechanisms to prevent major deviations.

Separate hydration for men and women isn’t warranted and it’s something which the American College of Sports Medicine Position Stand on exercise and fluid replacement also concluded: ‘The sex differences in renal water and electrolyte retention are relatively subtle and most likely not of consequence’.

Are women at increased risk of hyponatremia?

An increased risk of hyponatremia in women was previously attributed to the fluid retaining and sodium-excretion effects of estrogen and progesterone; thus predisposing women to low blood sodium levels in the luteal phase of the menstrual cycle. However, as covered above, this seems unlikely.

It’s true that women may be at a greater risk of exercise-induced hyponatremia. Several different analyses of the data have reported incidences of hyponatremia being greater in women than men. 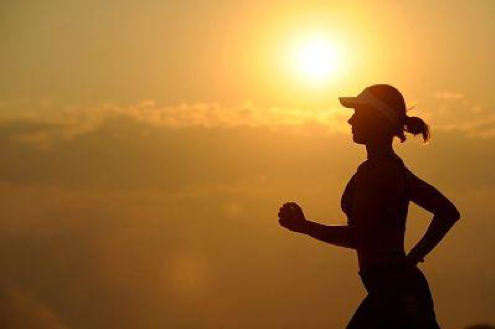 But, this risk has been attributed to their lower body weight and size (increasing the likelihood that a ‘standard’ volume of fluid is too much for them), as well as longer racing times relative to men (see a review paper on hyponatremia published in 2019 here), rather than their sex and different physiological responses.

A study conducted on participants at the 2002 Boston Marathon emphasised this point. It found 13% of finishers were hyponatremic and the majority of those were women. The apparent sex difference disappeared when the data was adjusted for body mass index and racing times though.

There’s no evidence that anything beyond stature and drinking behaviour – which doesn’t need to be sex-dependent – significantly increases the risk of hyponatremia.

It’s been suggested that women may excrete more sodium in their sweat during the luteal phase of their cycle, possibly as a result of the subtle increase in core body temperature which may influence sweat rate and sweat make-up (see page 8 of Roar).

Unfortunately there’s no evidence to suggest this is the case and differences in sweat sodium output are unlikely to be of clinical relevance to nutritional recommendations for the following reasons:

Sweat sodium concentration is largely determined by a person’s genotype and sex differences have never been reported. 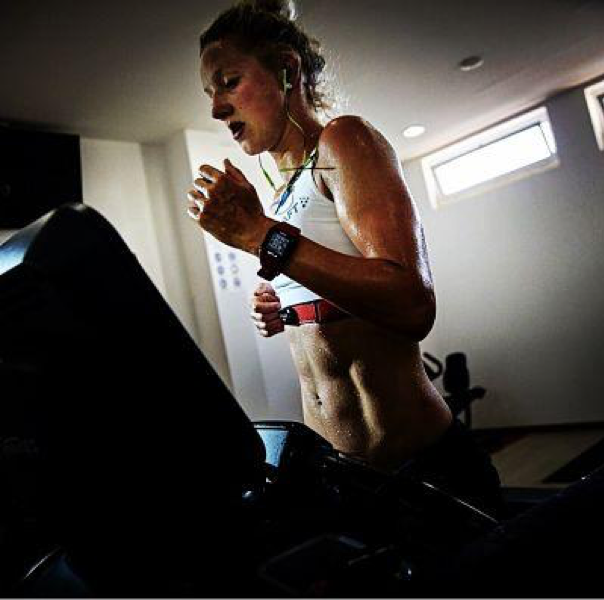 Where men and women may differ is their sweat rate (i.e. how much fluid they lose).

Typically, men have greater average sweat rates than women, primarily because women generally have smaller body sizes and lower metabolic rates when performing a given task than men. As a result of the higher sweat rate, the total electrolyte losses may be higher too.

But, there’s much individual variation to consider here. Some women have extraordinarily high sweat rates, not to mention the fact that they can have very high sodium losses which, despite a (possibly) lower sweat rate, may equate to a high net sodium loss overall.

Simply put, with so much individual variation, is it right to categorise individuals by their sex when it comes to hydration?

There may be subtle changes in fluid and sodium balance across a women’s menstrual cycle, which may at times reach statistical significance in research.

Writing this blog has highlighted to me the importance of reminding ourselves as practitioners and athletes what is clinically significant (i.e. what matters in the ‘real-world’ to performance).

Whilst suggestions have been made that physiological differences between men and women will mean our approaches to hydration should differ, my interpretation of the evidence is that viewing hydration on an individual scale and accounting for a person’s size, sweat rate and sweat composition, their sport and their environment, is of far more importance than their sex.

Precision Hydration are the Sweat Experts. To receive your own personalised hydration plan and electrolyte recommendations based on how yousweat, take this free online Sweat Test.

Women’s Running readers can get £10 off their first order of electrolytes at precisionhydration.comby using the code WOMENSRUNNING at the checkout before midnight on 31stMay 2020.

If you have any questions about your hydration strategy or PH products, please email hello@precisionhydration.comand a dedicated Sweat Expert will be happy to help.

Abby Coleman is the resident Sports Scientist at Precision Hydration. Abby completed her BSc (Hons) degree in Sport and Exercise Science at the University of Bath and has worked at the Porsche Human Performance Centre as an exercise physiologist. She also has qualifications in nutritional training, sports massage and sports leadership.