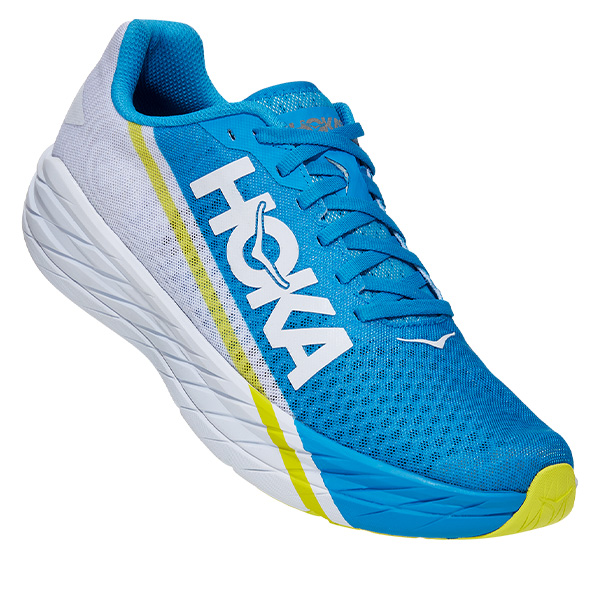 Yup, these are called Rocket X. So first off, HOKA ONE ONE wins the name game by about a billion points, because if you’re in the market for a new pair of fast shoes, then a pair called ‘Rocket’ is already ticking a very big box.

The HOKA ONE ONE Rocket X are described as “one of the most energetic shoes HOKA has launched to date”. These are super responsive shoes, designed for fast running at shorter distances.

As they’re HOKA, they are incredibly light – just 210g, so they feel featherweight. This is the one of the lightest shoes in HOKA’s line-up, in fact, and you can really feel the difference on your feet. It’s been engineered as a ‘racing flat’, although cos this is HOKA they don’t look like the racing flats you might be used to – largely because of that signature platform foam.

The foam itself is the lightest foam that HOKA have employed in a shoe yet, and have combined that with a breathable upper, and a lightweight foam outsole. But inside that light foam is where the really exciting bit is: there’s a 1mm carbon fibre plate stashed in there; the same one they have in the Carbon X. 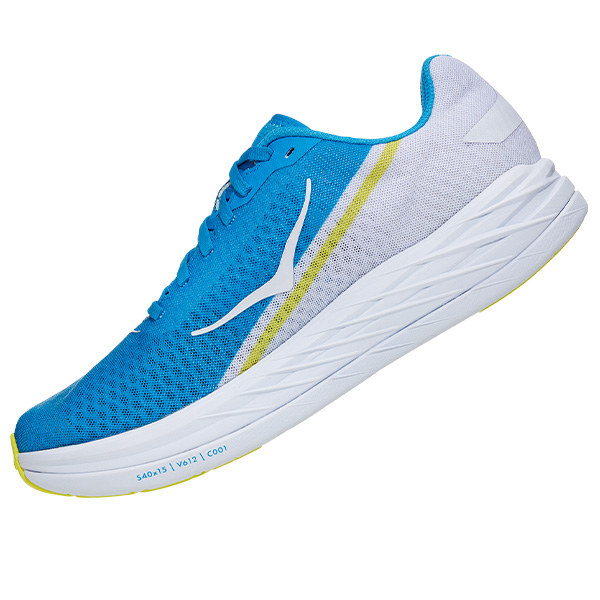 It’s an incredibly comfortable shoe, right from the off. The fit is spot on – I go one size up in running shoes, and this fits like a dream. There’s wriggle room in the toebox, the upper hugs my midfoot well, and the fit around the ankle is comfortable enough that you don’t notice it, and it certainly doesn’t rub.

The feel is ludicrously bouncy – that word ‘responsive’ that brands tend to chuck around, really comes into its own here. What that means is that once you’re laced in, it feels like the shoes want to take you for a run rather than the other way round. The run is fast, joyful, bouncy – you can feel the shoes propelling you onwards. The confidence they inspire is awesome, to be honest.

We test a lot of shoes here, and a small minority actually make us excited – and these are firmly in that minority. I’ve had one small, fast run in them, and I cannot wait to get out there again. My only reservation with them is that they’re described as a “responsive racer geared for elite athletes”: I’m not an elite athlete, and never will be, but I loved these shoes. I’m not sure I would have bought them, though, with that description – so don’t let that put you off. These are shoes for every runner!

The Rocket X – spoiler alert – is £140. While £140 is a big chunk of change, it really isn’t a big price for the tech that’s been squished into this shoe. In fact, it’s borderline remarkable. A lot of high end running shoes are in this price bracket now, but the carbon fibre speed freak offering of the Rocket X could have comfortably pushed it closer to £200 and no one would have batted an eyelid. Keeping it under £150 makes this a shoe that more of us can try, and more of us can race in. Big thumbs up to HOKA for this one!

Buy now at HOKA ONE ONE