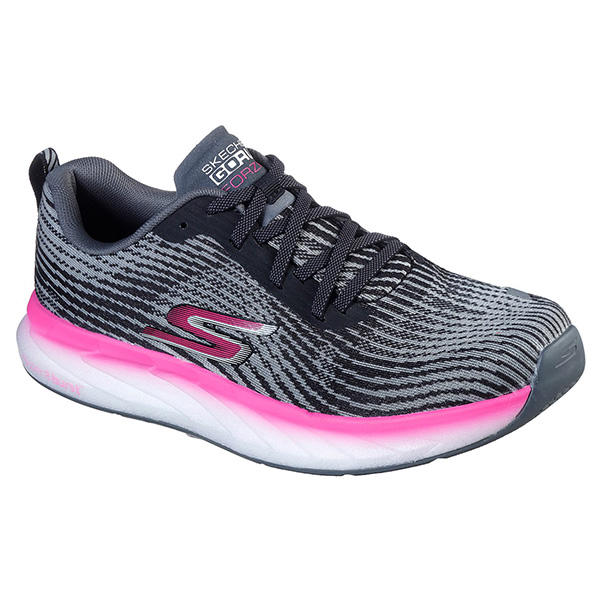 Don’t underestimate Skechers – that’s my big learn from testing out the Go Run Forza 4s. Up until very recently, I’d thought of Skechers as a fashion brand, but while they very much are, they are also very serious about their running shoes, utilising their decades of experience and combining that with some very smart tech indeed.

The Go Run Forza 4 is a mild stability shoe – but here’s the thing, out of the box, you would never believe that. And in fact, I had to check twice just to make sure. Why? Cos it’s light as a feather. Well, as light as a 235g feather at any rate, which is what my size 6s came in at, weighed scientifically on my measuring scales.

That’s super light for a stability shoe, as those medial posts etc can really add some grams – Brooks Adrenaline GTS 21 come in at 258g, for instance, while Asics Gel-Kayano come in at 244g. And those weights are taken from the brand websites, where women’s shoe weights are normally taken from a size 5, while my Forza 4 is a 6, so the Forza 4 gram-for-comparable-gram is looking very favourable indeed.

And ooh, it looks nice.

It’s a great looking shoe. The flouro pinkness of it removes any princess connotations, and married with black makes it a proper statement of a shoe. It’s definitely received more than a couple of admiring glances, and even a “where did you get THOSE?” which is a rare compliment indeed.

They feel great on. The fit is basically spot on. I sometimes go up a whole size for running shoes, but with these just half a size was perfect, and the fit was great. I’ve got quite a high arch, and the fit was fantastic around the midfoot; snug but not too tight. There was plenty of room in the toebox without feeling too spacey, and there was no budging around the ankle either. It feels quite warm on – so you can imagine this would be a good choice for winter running, as it has a toasty feel, which has something to do with that pretty plush upper, which feels thicker than a lot of shoes these days, particularly in the lightweight category.

So what’s under the bonnet? Loads of good stuff, basically.

The support element comes in the form of Skechers’ Ultra Flight technology, its medial support system. This gives some support, but it’s definitely not as rigid as a lot of support shoes, so it feels fine for both neutral and mild overpronators. What’s marked, though, is that you don’t ‘feel’ it – there’s no stiffness at all, the shoe remains very flexible and moves with your foot.

In part, this will be down to the Hyper Burst midsole, which provides you a really energetic cushion: so it’s quite firm to the tread, but gives you a bit of a ‘ping’ forwards as you run.

That tech is teamed with something called M Strike, another bit of tech in the sole, which helps encourage you to land midsole rather than to heelstrike.

Finally, the Goodyear outsoles top everything off: giving you good, confident grip, especially in wintery, wet weather. And again, this is a pretty robust, and surprising, offering for such a light shoe.

Cor. Innit good? There’s a confidence you get from a good fit, and that’s the first big tick for the Forza 4. Second impressions are slightly odd: it’s that M Strike – you can feel it under your sole, a sort of hump after the heel, which means that walking feels a little weird. But as soon as you take off, running feels completely natural, even with a lower drop than normal. And yes, it really does encourage you to plant your foot down at the midsole. And more midfoot striking means potentially less risk of injury, so this is all very good.

They do feel a little stiff to begin with, but noticeably more flexible after a run, as though your feet have bedded in. I really appreciated that outsole in the current conditions, too – I have cold feet, and I’m a tentative runner in the wet, and these gave me a very welcome boost of warmth and confidence in both areas.

The energy return was fabulous: that slightly stiffer feel gives real bounce and propulsion, something I’ve not seen much of in this price bracket, now that high end runners tend to be £150+.

A beautiful, high performance shoe, great for neutral and mild pronators, and perfect for cold weather running. If you need something to encourage you to get out there when the weather’s dreary, you’d do a lot worse than the Forza 4.