Salomon Speedcross 5: How do you redesign an icon? | Women's Running

Salomon Speedcross 5: How do you redesign an icon?

Redesigning an iconic shoe like the Salomon Speedcross must have been tougher than the trails it tames, but what has emerged is something special. Written by Damien Whinnery at Wiggle.

Over a million pairs of Speedcross are bought each year by intrepid hill climbers, fell runners, adventures, and off-piste runners. But as shoe technology evolves, Speedcross has had to keep up.

The flagship Salomon shoe has always been lauded for its stupefying grip, but version 5 has found yet more ways to enhance its star feature.

Larger, more aggressive lugs have been spaced more widely, with an updated geometry for better push-off and braking.

“You can see that it will be agile and bite the ground because of the lugs. It’s like a motocross tire, with no compromise,” said Salomon’s Global Footwear Design & Innovation Sport Science Director Philippe Besnard in a recent interview.

“And you can’t take the lugs from the Speedcross because that ability to bite the ground is part of the source code.”

It’s the success of that source code which has ensured the Speedcross’s popularity for over half a decade.

But more than that, it’s the excitement that Salomon have for their new shoe that’s proving infectious with runners and adventurers. 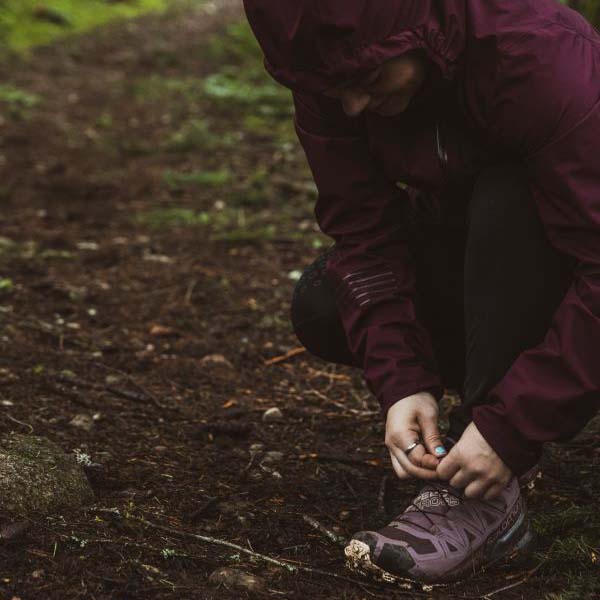 “There are two kinds of excitement as a designer,” Besnard said. “There is working with a blank slate or working to regenerate and make something more exciting—like the fifth generation of a shoe that we sell millions of pairs of when no one knows how we can make it better.”

And key to that challenge was making the new Speedcross “more Speedcross”, as Besnard put it.

“It’s an icon,” he said. “We know that; so, we needed the simplest execution of that, but we needed it to be more expressive.”

And expressive it certainly is, with sweeping curves and a return to its original silhouette. The extra-high heel counter, meanwhile, adds fuel to the shoe’s fire.

It’s inside heel where the action is truly happening, however. It’s essentially a carefully constructed cradle for that important pedal pivot point, ensuring a clean foot strike and stability through the stride.

It also has a completely welded upper offering more toe volume for more natural movement of the foot, providing comfort no matter how rocky the road.

“It has more attitude than the previous design,” Besnard added. “I can’t tell you how we did that exactly because you don’t give away the recipe.”

He’s quite right. The Speedcross 5 looks just as tasty as its former iterations. And one thing is for sure, runners everywhere are going to eat it up.