Thinking of doing a running retreat? Here's what to expect - Women's Running

Thinking of doing a running retreat? Here’s what to expect

As someone who mostly runs alone, I’d been thinking of doing a running retreat for a long time. Getting to spend a few days doing what I love with like-minded people sounded like total heaven. But as I got on the train to make the journey down to Devon for my first running retreat, I suddenly questioned my decision.

What if I couldn’t run fast or far enough? What if everyone else was there in pairs? What if I hadn’t brought the right running kit? What if I had to run on an empty stomach or, worse, a full stomach?

Luckily, my time with Wild Coast Escapes quickly put all my questions to rest. We spent a magical few days running and swimming along the rugged Devon coastline, eating the most delicious (and nutritious!) food and talking with some incredible running experts.

I left feeling restored and re-inspired to run, and excited to plan my next running adventure. I feel that every runner should do a running retreat at least once in their life, but I know that the fear of the unknown can sometimes stop us from taking that leap. So, here’s my guide to what to expect from your first running retreat.

Don’t worry about being a ‘good runner’

There were some runners on the retreat who were super-speedy along the trails, but there were also some runners who wanted to take things more gently, and even someone who was currently taking a break from running due to injury.

The important thing is to know where you’re at and let the organisers know if you’re unsure about an upcoming run. Ronnie and Ceri, who run Wild Coast Escapes, wanted everyone to feel welcome and included. They adjusted and adapted the schedule to give us all options that suited. Within the runs themselves, there were usually two lead runners with us (one of whom was incredible ultra runner Jo Meek, who I fangirled over!), so that we could split into two groups dependent on ability.

I ended up doing a run every single day, because I have massive FOMO, but there was also the option to skip some out if you were feeling tired. One of the retreaters spent a lovely afternoon enjoying the hot tub with a view at our house while we got covered in mud on a trail run. After a shower, I was the first one to join them when we got back! 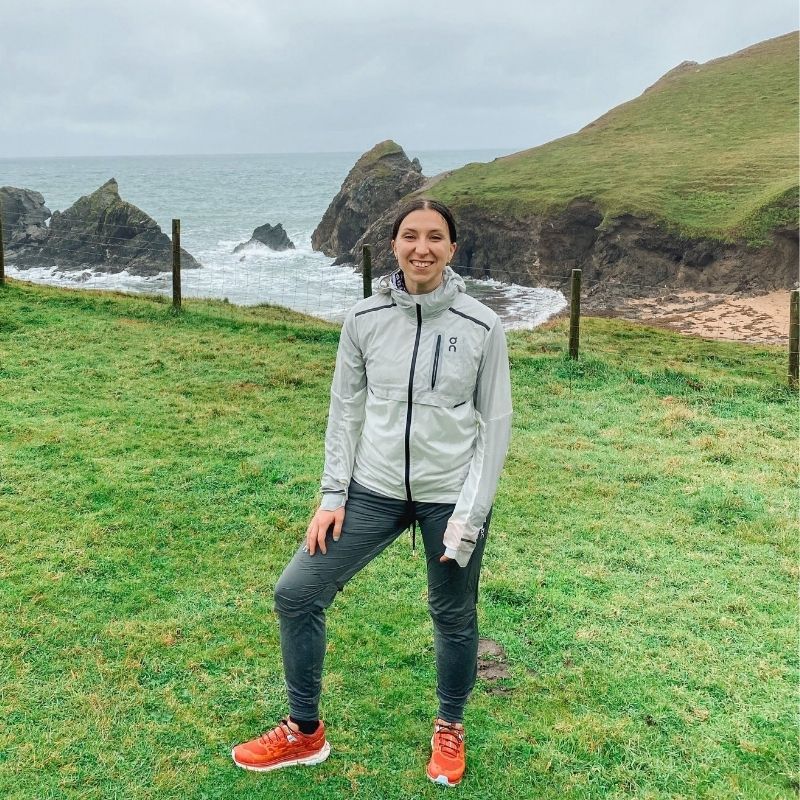 Although Ronnie and Ceri wiggled our schedule around to avoid the worst weather, we did still go out for some of our runs in the rain, so be sure to plan ahead and take what you need for wet weather if needed. Luckily, I’d seen the forecast! Having my waterproofs and a change of clothes for the van made it so much more enjoyable – I could just go ahead and get into the run, without worrying about getting wet.

I’d also recommend taking a spare pair of running shoes if you have them, especially if you’re not used to doing a run every day. My usual trail shoes gave me blisters after two days, so I was very glad I could swap them in for a second pair.

It’s OK to go to a running retreat alone

Lots of the other retreat goers were there with a friend, but it didn’t matter. Spending time together on our running adventures was a really bonding experience, and by the end of the first day, we all felt like one big friendship group.

That being said, if you’re looking for some alone time, there were also plenty of opportunity to relax and enjoy some space. In the lounge, Ceri brought along a whole collection of running books and guides that we could borrow and enjoy in a cosy corner. 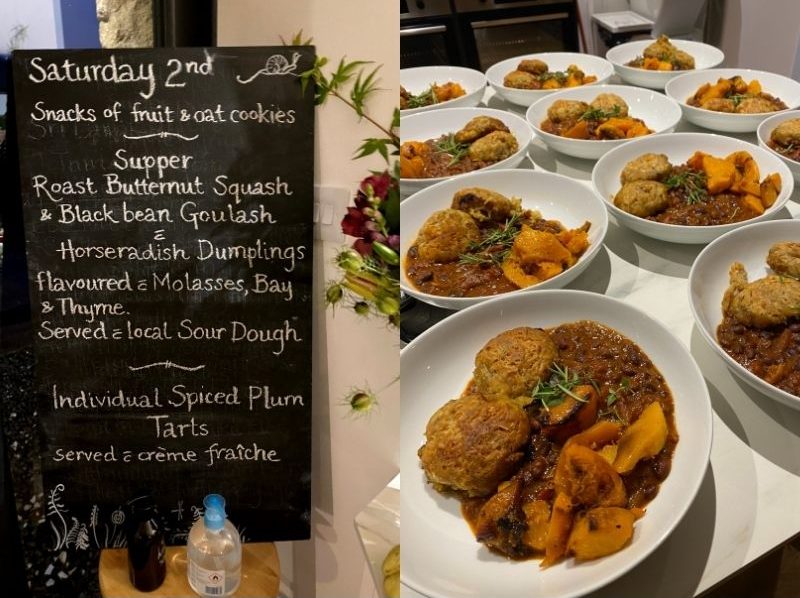 Look forward to the food

Meal times back at the retreat house were one of my favourite parts of the weekend. Our food was done by the brilliant Sandy of the Dartmoor Larder, and she turned local, seasonal ingredients into a feast of flavour for breakfast, lunch and dinner.

The whole menu was vegan, which made me a little nervous when I found out. A week of chickpeas on a yoga retreat a few years back caused some unpleasant flashbacks! But I needn’t have worried – Sandy’s food was absolutely incredible and there were even meaty options for anyone who needed some extra protein.

I was also worried about how the food was going to fit around my runs – I need a solid 2 hours between eating and exercising, and then food straight afterwards. It had all been taken care of by the team, who had carefully planned out the meals to reflect what we were doing next, and what our bodies needed nutritionally. There were plenty of options and snack bags to suit everyone’s needs – and an energy ball or two on-hand at all times in case a quick fix was needed.

Go with an open mind

As well as running, we also had the option to go wild swimming, do yoga, and attend some talks and 1-to-1 sessions with experts who visited the house each day. The people that got the most out of the retreat were the ones who were up for trying everything, even if it was brand new to them.

I’d also encourage everyone to ask any questions you have about any of the activities, as there was so much knowledge available – and questions always led to some great group discussions.

I honestly couldn’t recommend Wild Coast Escapes enough! It was such an enjoyable weekend thanks to the whole team.

They are back for 2022, and their next retreat is called Thrill of the Chill.

It’s a three-night experience, which fully embraces the wilder joys that the cold months have to offer, with coastal running, cold water swimming and cosy yoga sessions.

Your home for the weekend will be a charming, converted barn which consists of 10 bedrooms each with their own private bathroom, as well as two outdoor hot tubs overlooking stunning Devon scenery.

They’ve offered us an exclusive code for our readers – you can get 20% off when you use code WR20. Email [email protected] and quote the code to get your booking started. 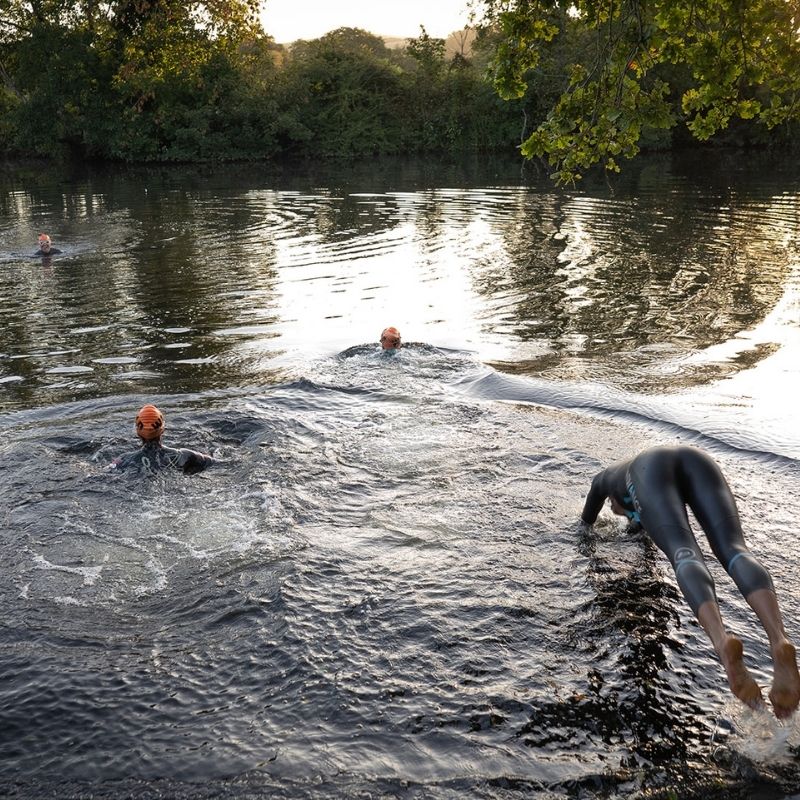