A marathon in Las Vegas: you know it’s going to be crazy, but you can’t imagine how crazy! Tina Chantrey ran the Rock ’n’ Rock Las Vegas Marathon, to roll her running dice and see where the chips would fall...

The Rock’n’Roll Las Vegas race weekend is like no other in the world. Not only because you are in Las Vegas, where the sun always shines, but being able to get up and gamble at breakfast, while have a beer (not a great pre-race plan, though plenty were doing it!), running along the Strip and just being in the Nevada desert… think of Disney World for adults and you get the idea.

Everything starts on Saturday evening, when over 9,000 runners participate in the 5K in the Festival Grounds, finishing with a concert where you could chill or dance to Kesha. The course winds its way around the grounds, with a short out and back along the main road, though it may take up to half an hour to cross the start line. This gives you extra time to absorb the lights, music and fun. The medal is epic and you’ll get a tee as well, and feel really geared up for the races on Sunday.

Sunday is the 10K, half marathon and marathon. The 10K kicks off the schedule, followed by the half and full. As the only event to shut down the famed Strip, the Rock ’n’ Roll Vegas is a unique opportunity to completely breathe in this surreal and sparkling city. The marathon starts just as the sun is setting and as the city is coming to life. 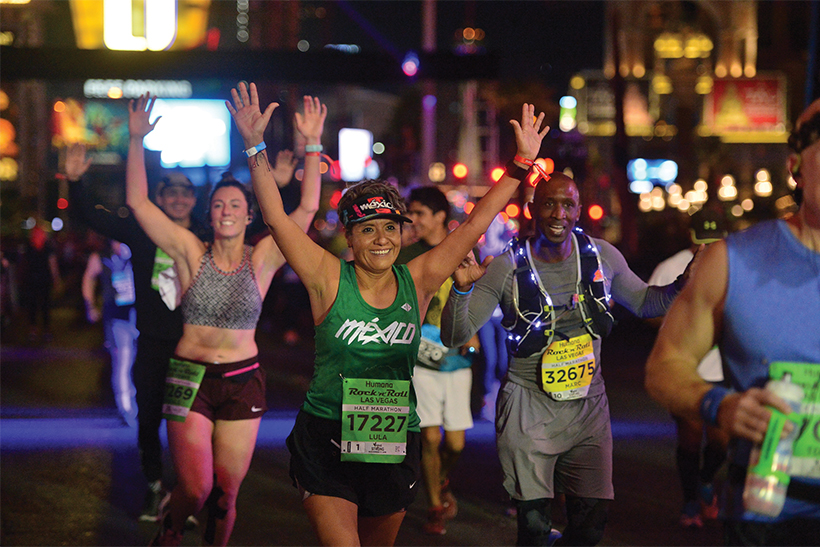 Back to the half marathon, though, which is mainly run on Las Vegas Boulevard, which means you have music and lights at almost every mile – plus plenty of support. For the most authentic Vegas experience go for the half, it will blow you away.

The marathon, in contrast, felt more like a race of two parts; the miles along the Strip are exciting, stimulating and with a high energy atmosphere. You won’t have time to worry about your watch. You will never forget these miles. The later stages, that lead away from the Strip, were much quieter and not well lit – these are the miles that will be tough. Compared to thousands in the shorter distances, it is immediately noticeable when you first head off on to the marathon course how few runners choose to run the full distance.

In the second half, there are a lot of turnarounds which would hamper you if you’re really gunning for a PB. Towards the end you enter the Festival Grounds, where the 5K is held, and cover quite a lot of ground through endless switchbacks. This section was mentally tough as you feel you’re never going to head back to the Strip. Eventually you do. The relief! When you finally exit the ground you’ll want to shout ‘Hallelujah!’, as you finally filter back on to the Strip with the half marathoners. There is one more section where you head away from the action for a mile or two (and this felt cruel!) but then you are there, at the electric finish. There is no other finish in the world like this one. NONE. 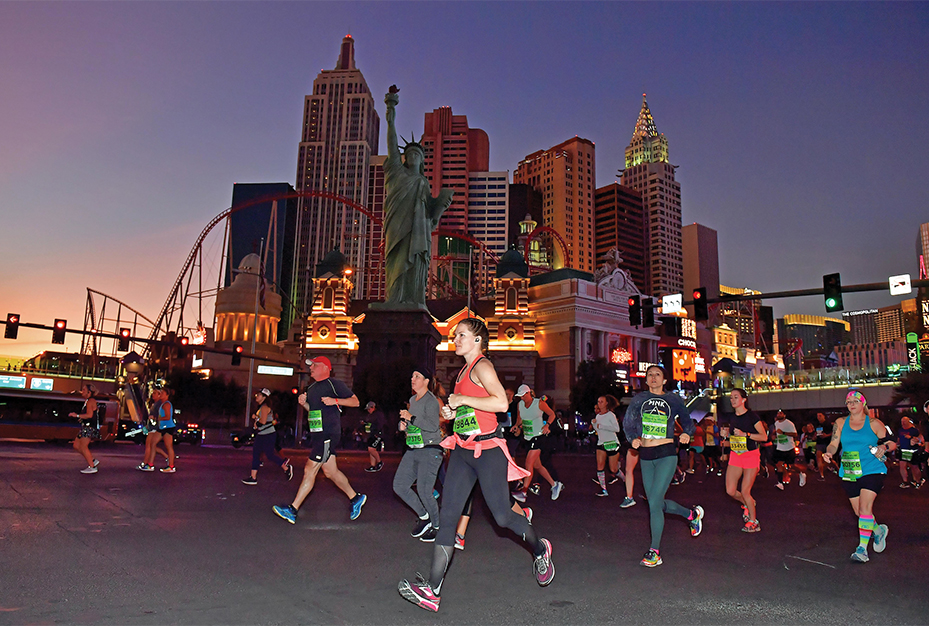 As smooth as a spinning roulette wheel

The race organisation was impressive. The starting corral is massive, yet everything flows smoothly as thousands upon thousands of runners of all abilities set off. There is so much fuel at the aid stations, including potatoes, that you don’t have to carry any food or water if you don’t want to. The bands make this race fun – if you are a runner wanting to dip your toes into the world of marathon running, chose this one.

The bling is very, very pleasing, with spinning parts to mimic the casinos; Rock ’n’ Roll don’t scrimp on your race experience. It’s a gold stand race. You’re encouraged to enjoy this experience, whether you’re walking or running. You are part of a crazy road show mile after mile. The finish leaves you looking around thinking, wow, did I just do that? I had to sit down just to take it all in. It’s a destination, bucket list race that has blown my mind.

Everything about this race is cool: running beneath the Statue of Liberty and the Eiffel Tower, the seamless organisation, the high performance, stylish t-shirts. Upgrade to the Gold VIP experience if you can, to include access to Drais nightclub for a post-race massage (heavenly even when you are sweaty and stinky), food and drinks. If you run on both Saturday and Sunday you get a bonus medal, too. And yes, you can have a run-through wedding during the race if you want to! Aww…

A word on inclusivity

Would it be accurate to state that I’ve never run in a big city marathon as inclusive and community focused as this one? Yes. It was joyful running with so many runners pushing buggies, as well as pushing wheelchairs (of all sizes). There were a lot of wheelchair participants, and in this race they all turn up with their rig fully lit. Everyone was shouting out to these folk. And a mention of the vast number of walkers has to be made: it seems the residents of Las Vegas figure if their city is being closed down, they may as well get involved in the race. Other races around the world, and our big city races here in the UK, could learn many lessons on raising inclusivity from the approach Rock ’n’ Roll take in LV.

Sign up here to register your interest for the 2020 marathon.