"It's a problem that stems from society": Rhiannon Linington-Payne on harassment - Women's Running

“It’s a problem that stems from society”: Rhiannon Linington-Payne on harassment

We spoke to sprinter Rhiannon Linington-Payne about her experiences of harassment, and what we should be doing so that we feel safe on every run

Rhiannon Linington-Payne spoke to us about the harassment she’s received while training outside due to pandemic restrictions, while she’s unable to train on the track. Most indoor athletics tracks have been forced to close as part of the Welsh lockdown, with only individuals classified as ‘elite athletes’ permitted to train at specific locations. As a result, more athletes are having to train in public spaces and have been verbally abused by strangers. We wanted to speak to Rhiannon to understand her experiences, and find out what she thinks needs to change in order for women to feel safe when they exercise outdoors.

We know, sadly, that lots of women feel unsafe when they run, but your experiences have really hit a nerve: what happened to you?

Rhiannon: Normally as a sprinter all my training would be behind closed doors on tracks with like-minded people. Everyone is supportive. But since we don’t have access to those facilities, I’ve had to train outdoors. And what I’ve experienced has shocked me so much – that it’s still happening.

I’ve had comments about the kit I’m wearing, about it being tight fitting. And a few weeks ago I had an empty beer can thrown out of a car at me. I don’t understand why people would choose to do that: why they would go out of their way to do that. It’s a problem that stems from society, not just in sport.

The safety issue is huge. I wouldn’t feel comfortable going into a pub on my own, for instance, but that’s “normal”. For me, it is swept under the carpet a little, because as women we’re used to it, and that’s so bad because we shouldn’t be. And since the story went out, I’ve heard from lots of endurance runners who train regularly on roads, and they say it happens all the time.

Yours is a horrible experience, and one that many of us can sympathise with. Sadly, a lot of experiences such as these aren’t reported, so few people hear about it. How did your experience make the news?

Rhiannon: After the beer can was thrown at me, I put out a tweet and didn’t think anything of it. But the uptake was unbelievable: it had nearly 100k views, it just resonated with so many people. As a result of it, the BBC got in touch and asked to interview me, and got in touch with my training partners, Lauren and Hannah, to talk about their experiences as well. 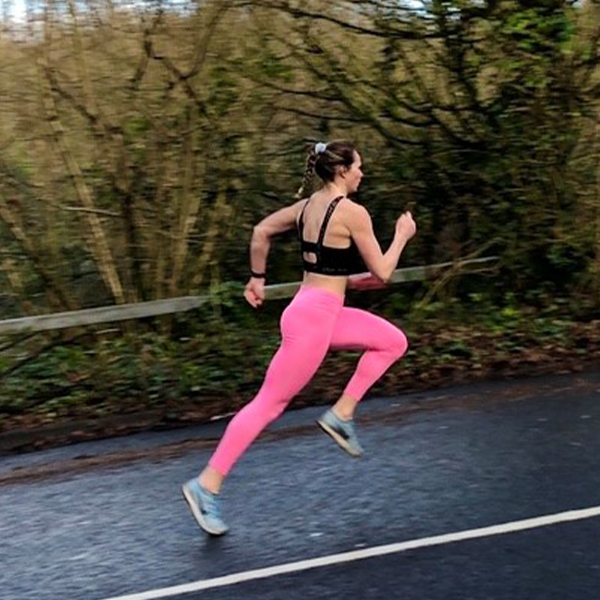 Do you think there’s been a shift in behaviour since we went into lockdown?

Rhiannon: I think in this lockdown, you feel less safe in the dark, which means so much exercise is done after dark, I’ve definitely had more of it during January. Maybe people think they won’t be identified as easily in the day? I think in the summer there were more like-minded people out exercising, so it didn’t feel as unsafe.

Can you tell us more about the campaign?

Rhiannon: The campaign essentially started last year: a colleague and training partner of mine started it last summer because of racial abuse he suffered. So off the back of that Welsh Athletics is sharing the message: don’t be afraid to get out there and exercise.

I know the benefits of exercise and training. And we want to encourage people to get out there, to exercise and to share their experiences – hopefully by sharing them, people will share them further, promoting understanding of how people feel. We need a massive wider culture change around respect for people in general. The further the message is shared, the more likely it is to reach [the people that harass]. It’s important that it keeps getting talked about and it needs to be shared by the community rather than individuals.

I’ve been asked the question that if it only happens once in a while, is it an issue? Yes it’s an issue, because it happens. Society has normalised this behaviour. Addressing it from a sporting perspective is great, but I think we need to make sure that voices are heard from the wider community too.

As a response to Rhiannon and her colleagues’ experience, Welsh Athletics has begun working with South Wales Police to crack down on intimidating or abusive behaviour. We commend this action; very different to that of Avon and Somerset Police’s reaction two years ago, suggesting that women should run in groups to feel more safe. South Wales Police is, quite rightly, focussing on the perpetrators of the harassment and how we can bring about change through society, rather than expecting the women who are victims of these experiences to change their behaviour.

What are your experiences? And what should our communities be doing to ensure we feel safe while we exercise outdoors? Let’s make our voices heard. Email us here and we’ll report back with an update on your experiences, and your ideas on how we can make exercising more safe.